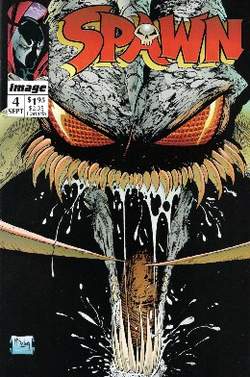 (pop culture)
Violator, also known as Clown, is the arch-nemesis of Spawn, a superhero created by writer/illustrator Todd McFarlane in 1992. Spawn is the flagship title of Image Comics, a company formed when several prominent artists working at Marvel Comics left to form their own line based primarily on creator control and ownership. Spawn is perhaps the best example of the grim-and-gritty tone that dominated mainstream superhero comics in the late 1980s and much of the 1990s. The title character of Spawn is Al Simmons, a covert government assassin who, after he is murdered by a fellow government operative, returns to Earth as a Hellspawn. The primary mission of a Hellspawn, an agent of the demon Malebolgia, is to recruit enough damned souls on Earth for the forces of hell to wage a final war on heaven. The Violator, a demon servant of Malebolgia, is assigned to keep an eye on Spawn and guide him in the right direction. As Violator tells Spawn in issue #4, “I'm not here to game-play. I'm here to keep you in line—make sure you don't stray.” In the 1997 live-action film, Violator tells Spawn to “just think of me as your guardian angel … the Clown from Hell.” On Earth, Violator chooses to appear in the form of the Clown—an obese, grotesque character almost as disturbing as his demonic Violator form. Guided by the jealousy of Al Simmons' promotion to Hellspawn, Clown tries to provoke Spawn instead of guarding and guiding him. As Violator, he goes on a murderous rampage through New York's mob underworld in an attempt to pull Spawn into direct combat. This strategy succeeds, but it eventually gets Clown into trouble. Malebolgia breaks up the fight, punishes Clown for his incompetence, and strips his Violator form and powers from him. Violator's demotion doesn't prove to be much of a deterrence, however. In the first issue of Violator (1994), a three-issue miniseries written by Alan Moore and illustrated by Bart Sears, Clown indicates that he hasn't changed much despite his limitations: “Maybe I don't look like a demon outta hell no more, but that don't mean I ain't thinkin' like one!” In this miniseries, Moore also reveals that Violator is one of five demonic siblings called the Phlebiac Brothers. In addition to his troubles with Spawn, Violator also has to cope with his role as the family embarrassment. Clown has emerged numerous times to provoke Spawn throughout the long-running comics series. Although he has reclaimed his Violator form from time to time, he chooses to appear as Clown most often. In a story arc called “A Thousand Clowns” (issues #134–#138), Clown possesses the body of fellow Spawn enemy Jason Wynn, recruits a legion of disciples, and orchestrates a chaotic riot in New York City before Spawn is able to stop him. As Todd McFarlane has ventured into several different media outlets since 1992, Clown and Violator have made appearances in numerous two- and three-dimensional forms. One of the highlights of the 1997 live-action Spawn film, directed by Mark A. Z. Dippé is John Leguizamo's portrayal of Clown. The film version of Clown, like his comics counterpart, is simultaneously comical and menacing. His flatulence, cursing, and general obscenity are all effectively enhanced in the live-action format. Clown was also featured prominently in the HBO Spawn animated series (1997–1999), which stayed much closer to the comics than the movie in terms of tone and continuity. In the animated series, which ran three seasons, Clown is appropriately dark and sinister. In each of Spawn's forays beyond comic books, Violator/Clown has appeared as the primary villain. The first series of McFarlane Toys' long-running action figure line featured both Violator and Clown figures, and Violator/Clown has also been the villain of several video games. While crimelord Lukas, with his brutish right-hand man Barabbas, is the first villain in McFarlane's newest television venture, Spawn: The Animation (2006–present) from DPS/Film Roman, one might suspect that the Violator will find a home there as well. Like Spawn himself, Clown is partially derivative of other recognizable comic book characters. If Spawn is an amalgam of dark superheroes like Batman and anti-heroes like the Punisher, then Clown offers a modern twist on the Joker, the “Clown Prince of Crime” in the Batman mythos. Whereas Joker is tall and somewhat dignified even in madness, Clown is short, fat, crude. He is a comic figure—a type of incompetent fool or court jester—but he is also extremely horrific and dangerous, both to Spawn and to humanity.
The Supervillain Book: The Evil Side of Comics and Hollywood © 2006 Visible Ink Press®. All rights reserved.

Feedback
Flashcards & Bookmarks ?
Please log in or register to use Flashcards and Bookmarks. You can also log in with
Flashcards ?
My bookmarks ?
+ Add current page to bookmarks
Mentioned in ?
References in periodicals archive ?
He also called on all Emiratis, expatriates and investors not to shelter or hire violators before modifying their status and sponsorship.
Renew status or pay fine, expats on job-seeker visas in UAE told
He also added that violators have the right to provide evidence that their original employers know of the third-party employers in Qatar, either by providing a contract or witnesses; in case these evidences are provided, the court will have the choice to fine violators a maximum fine of QAR 12,000 or less.
Immigration warns 300k Egyptians in Doha of being deported
"These toll violators are effectively stealing from the state and the citizens of Texas.
TxDOT Releases Names of Top Toll Scofflaws
asking all local sponsor persons not to keep the passports of violators in
Kuwait gov''t calls on residency violators to modify their status, or depart
Violator manages and has released music for hip-hop stars such as 50 Cent, Busta Rhymes and Missy Elliot.
O positive lease
The results of this study support four specific policy implications for treating parole violator populations.
Understanding and responding: to the needs of parole violators
Under the new system, if a death occurs during a road accident because of a traffic violation and police find the violator guilty during investigation, his or her licence will remain suspended for two years even if the violator reaches an agreement of reconciliation with the aggrieved family.
IG Punjab orders to escalate launch of e-challaning system
5) if they lose visual contact with the violator and become unsure of the suspect's whereabouts or continued direction of travel.
Establishing a Foot Pursuit Policy
Authored by Councilors Ranulfo Ludovica and Godofredo Liban II, the ordinance stated that violators would be given five days to pay the fine after which they would be issued official receipts.
QC gov't junks jail time for ordinance violators
'Half of that amount, or Rs260 million, has to be disbursed among the traffic police officials entitled to earn commission on ticketing traffic violators.'
Traffic police seeks Rs520m 'commission' for ticketing violators
RAWALPINDI -- Rawalpindi City Traffic Police (CTP) issued 10,587 challan tickets with fines amounting to over Rs 2.1 million imposed on the parking rules violators in July.
Rs 2.1 mln fine slapped on 10,587 parking rules' violators