in electrical engineering, a voltage rise that endangers the insulation of electric equipment. A correct calculation of voltage surges is of great economic and practical importance in the selection of insulation and of measures for power-supply system protection, particularly for voltages above 10 kilovolts (kV). There are two types of voltage surges—lightning surges and system-generated surges.

System-generated voltage surges. System-generated voltage surges are surges that appear in electric equipment when abrupt changes occur in operating conditions. The principal causes are switching events such as the connection or disconnection of a current and short-circuiting to ground. Switching is accompanied by transient processes, after which new operating conditions are established within the system. Consequently, a distinction is made between brief, switching surges lasting several microseconds or tens of microseconds and prolonged surges that occur under steady-state conditions.

Switching surges can be produced by the repeated igniting and extinguishing of electric arcs in circuits with capacitive susceptance. Such voltage surges are obtained, for example, in disconnecting unloaded lines or by the grounding through an arc of one of the phases of a three-phase system with an insulated neutral conductor. In a certain approximation, an unloaded line can be considered to be a capacitance (Figure 1, a). When such a line is disconnected, an arc ignited between the contacts of the switch K will be extinguished when the arc current is passing through its zero value and the source voltage is passing through its maximum value (Figure 1,b). When the arc is extinguished, the capacitance C is disconnected from the source and remains charged at the maximum voltage. Should the arc in the switch be ignited again after half a period, when the source voltage will have changed its polarity, the capacitance C will be recharged through the inductance of the source Lsource. The arc may be again extinguished at the moment when the voltage is at its maximum and the recharging current has the value zero. In this case, the capacitance, disconnected from the source, will be charged with a voltage three times as great as before. If, after another half-period, the arc is again ignited, and extinguished, the line voltage will reach the value 5Uρh, where Uph is the phase voltage of the line. Voltage surges in real lines are limited by good disconnecting capabilities of switches and by effective losses and do not exceed 3.5UPh. Voltage surges arising when one phase of a three-phase system is grounded through an arc are of a similar nature and also involve the accumulation of charges in the conductors of the line. 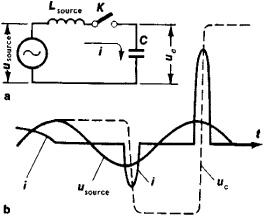 Figure 1. Formation of voltage surges when an unloaded line is disconnected: (a) equivalent circuit of an unloaded line, (b) dependence of the instantaneous values of the arc current i and the line voltage uc on the time t given a sinusoidal source voltage usource; (K) switch, (Lsource) source inductance, (C) capacitance of the unloaded line

When inductive loads, such as unloaded transformers, induction motors, reactors, and mercury rectifiers during current breaks, are disconnected, the switching voltage surges that occur are a consequence of the abrupt reduction of current in the inductance and of the release of the electromagnetic energy stored in the inductance. Were a truly instantaneous interruption of current to occur, all of the stored energy would be used to charge the self-capacitance of the inductive load with respect to the ground (Figure 2,a). For this case, the amplitude of the voltage surge umax can be determined from the energy conservation equation

In reality, the current in the coil does not disappear instantaneously. The surge attains its maximum value at the moment when the decrease of current occurs at a maximum rate. The surge then diminishes to zero in a sequence of damped oscillations (Figure 2,b).

Switching surges that occur upon making a connection to a line are associated with the development of a transient process in the oscillatory circuit formed by the capacitance of the line and by the inductances of the line, transformers, and generators. Particularly large surges occur in automatic reconnection. In this case, after a disconnection, for example, after a single-phase short circuit, the capacitance of the undamaged phases of the line remains charged. Upon reconnection, the oscillatory circuit (the line) with the previously charged capacitance is connected to the current source (the generator).

Voltage surges under steady-state conditions are associated with the capacitance effect in linear circuits and with resonance at the fundamental frequency or at the higher harmonics. An example of such a surge is the voltage rise that occurs in non-loaded power lines when the natural frequency ω0 of the source-line system is close to the frequency of the voltage source ωsource. If ω0 = ωsource, resonance occurs and a surge is consequently generated. Such surges are possible in long power lines that operate at voltages of 330 kV or higher. Resonance at the fundamental frequency can also occur if one of the phases of a three-phase AC line is interrupted and grounded and a lightly loaded transformer is connected to the end of the line (Figure 3,a). At higher harmonics, a resonance can occur, for example, if there is a single-phase or two-phase short circuit to ground in a line fed from a salient-pole generator. During such short circuits, higher harmonics of the voltage appear at the terminals of the generator. These harmonics can cause resonance in the circuit that consists of the inductance of the generator and the capacitance of the undamaged phases of the line. In nonsalientpole generators and in generators equipped with damper windings, surges of this type do not arise.

System-generated voltage surges usually do not present a danger to the insulation of electric equipment that is operated at 220 kV or less; lightning surges are a more important factor for such equipment. For equipment operated at or above 330 kV it becomes necessary to limit system-generated voltage surges. A lowering of switching surges can be achieved by using specially designed valve dischargers, by using switches equipped with shunt resistors, and by controlling the moment of switching. To limit the surges that occur under steady-state conditions, electric shunt reactors are also used.

Lightning surges. Lightning surges are voltage surges that are associated with lightning discharges either directly into the current-carrying parts of electric equipment (direct-strike surges) or into the ground adjacent to the equipment (induced surges). In a direct strike all of the lightning current passes into the ground through the struck object. The voltage drop across the resistance of the object also creates a surge that can be as great as several megavolts. The duration of voltage surge caused by a direct lightning stroke is small—of the order of several tens of microseconds. It is possible, however, for several lightning discharges to follow the same path. The insulation of very high voltage electric equipment is not capable of withstanding a direct lightning stroke. For reliable operation of the equipment it is necessary to implement a number of protective measures. Induced surges arise in the wires of power lines as a result of an abrupt change in the electromagnetic field near the ground at the time of a lightning stroke. The amplitude of the induced surges usually does not exceed 400–500 kV; such surges present a danger only to equipment with a voltage rating of 35 kV or less.

EDITED BY M. A. ARONOV

Feedback
Flashcards & Bookmarks ?
Please log in or register to use Flashcards and Bookmarks. You can also log in with
Flashcards ?
My bookmarks ?
+ Add current page to bookmarks
Mentioned in ?
References in periodicals archive ?
In addition, metal oxide varistors are used to protect a circuit from high voltage surge. When a voltage surge exceeds a specified voltage, the varistors suppresses the voltage to protect the circuit.
Global Metal Oxide Varistors Market -- Industry Analysis, Size, Share, Growth, Trends, and Forecast 2
The AC is protected against sudden voltage surge or drop.
Best AC deals on Amazon: Offers on LG, Samsung, Mitashi and more
It is wise to install a whole-house voltage surge suppressor to protect entire branch circuits throughout your home.
Whole-house surge suppressor useful in today's high-tech world
Any voltage surge puts excessive stress on these components.
4 things to know about power surges from hurricane-force winds
Based on the generated plots, the trend line of the voltage surge to the tower footing impedance was established (4), where V is the voltage surge and x is the tower foot resistance, according to a polynomial function:
Variation of Tower Footing Resistance on the Lightning Surge Propagation through Overhead Power Distribution Lines
The short is likely caused by a transient voltage surge that occurs if the HMMWV is improperly slave started or operated with low batteries.
Disconnect to protect windshield de-icer
A transformer inside the mosque in Yae Kyaw township in Yangon overheated due to a voltage surge and caught fire around 3 a.m., setting ablaze the two-story structure, according to a police report.
13 children die in fire at mosque in Myanmar
All SSL systems should be protected by a transient voltage surge protector to ensure that line spikes are controlled and dissipated."
Everything in moderation
They are intended for installation at the service entrance and/or distribution panels for full facility transient voltage surge protection.
Superior Electric powers up
So while the busy September schedule is unfolding around preparing yearlings for sale, the impending arrival of Makfi has given the operation a voltage surge.
GIRL POWER; Our young filly is growing up fast and she's quick to establish the pecking order when a new playmate arrives: Carl Evans with the latest in our fortnightly series following a horse from conception to who knows where, and why there is excitement at the imminent arrival of a new resident
While earnings were down from the third quarter, I was pleased with the overall performance given the negative impact of the June 17th power failure and resulting voltage surge at our Florida facility.
Buckeye reports earnings