Blake, William, 1757–1827, English poet and artist, b. London. Although he exerted a great influence on English romanticism, Blake defies characterization by school, movement, or even period. At the same time no poet has been more sensitive or responsive to the realities of the human condition and of his time.

Blake's father, a prosperous hosier, encouraged young Blake's artistic tastes and sent him to drawing school. At 14 he was apprenticed to James Basire, an engraver, with whom he stayed until 1778. After attending the Royal Academy, where he rebelled against the school's stifling atmosphere, he set up as an engraver. In 1782 he married Catherine Boucher, whom he taught to read, write, and draw. She became his inseparable companion, assisting him in nearly all his work.

Blake's life, except for three years at Felpham where he prepared illustrations for an edition of Cowper, was spent in London. Poetical Sketches (1783), his first book, was the only one published conventionally during his lifetime. He engraved and published all his other major poetry himself (the rest remained in manuscript), for which he originated a method of engraving text and illustration on the same plate. Neither Blake's artwork nor his poetry enjoyed commercial or critical success until long after his death.

Work in the Visual Arts

Blake's paintings and engravings, notably his illustrations of his own works, works by Milton, and of the Book of Job, are painstakingly realistic in their representation of human anatomy and other natural forms. They are also radiantly imaginative, often depicting fanciful creatures in exacting detail. Nearly unknown during his life, Blake was generally dismissed as an eccentric or worse long thereafter. His following has gradually increased, and today he is widely appreciated as a visual artist and as a poet.

In Songs of Innocence (1789) and Songs of Experience (1794) the world is seen from a child's point of view, directly and simply but without sentimentality. In the first group, which includes such poems as “The Lamb,” “Infant Joy,” and “Laughing Songs,” both the beauty and the pain of life are captured. The latter group, which includes “The Tyger,” “Infant Sorrow,” “The Sick Rose,” and “London,” reveal a consciousness of cruelty and injustice in the world, for which people, not fate, are responsible. As parables of adult life the Songs are rich in meaning and implication.

Blake's Prophetic Books combine poetry, vision, prophecy, and exhortation. They include The Book of Thel (1789), The Marriage of Heaven and Hell (c.1790), The French Revolution (1791), America (1793), Europe (1794), The Book of Urizon (1794), The Book of Los (1795), Milton (1804–8), and Jerusalem (1804–20). These comprise no less than a vision of the whole of human life, in which energy and imagination struggle with the forces of oppression both physical and mental. Blake exalted love and pure liberty, and abhorred the reductive, rationalist philosophy that served to justify the political and economic inequities attendant upon the Industrial Revolution.

The Prophetic Books are founded in the real world, as are Blake's passions and anger, but they appear abstruse because they are ordered by a mythology devised by the poet, which draw from Swedenborg, Jacob Boehme, and other mystical sources. Despite this, and despite the fact that from childhood on Blake was a mystic who thought it quite natural to see and converse with angels and Old Testament prophets, he by no means forsook concrete reality for a mystical life of the spirit. On the contrary, reality, whose center was human life, was for Blake inseparable from imagination. The spiritual, indeed God himself, was an expression of the human. 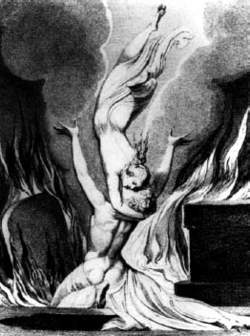 William Blake was an English mystic, artist, and poet. He was born in London on November 28, 1757. His father James was a hosier. His mother was Catherine Harmitage. William had three brothers and a sister; he was the second eldest son. James Blake recognized his son William’s artistic talents and encouraged him. At the age of ten Blake went to Henry Pars’ drawing school and in August 1772, he was apprenticed to the engraver James Basire. At the end of his apprenticeship Blake entered the Royal Academy School and was taught by the chaser and enameller George Moser.

At the age of 21, having left the school, Blake set up as an engraver himself and made a good living for the next twenty years, working for publishers and booksellers. In 1780 he first exhibited at the Royal Academy. Blake was greatly influenced by the Gothic style, regarding it as the ideal. His first book of poems was Poetical Sketches and its publication was financed by Mr. Matthew, a clergyman and admirer.

Blake met Catherine Boucher, the illiterate daughter of a market-gardener, in 1781 and married her the following year. She learned to draw and paint well enough to help with her husband’s work. In 1788, Blake started experimenting with a new method of printing using acid-etched copper plates. It is said that the method had been revealed to him in a dream by the spirit of his dead brother Robert. Robert was the youngest of the Blake boys and had been very artistic himself; he died at the age of twenty-one. The first examples of printing from these etched plates were in the two works There Is No Natural Religion and All Religions Are One. Together with Blake’s Songs of Innocence—lyrical poems etched on copper with decorations colored by hand—these were a prelude to “the remarkable series of books in ‘illuminated printing’ which occupied Blake in some degree for the remainder of his life” (Encyclopedia Britannica).

Blake was a prolific painter. In 1797 alone he produced a series of 537 watercolor designs. He worked in tempera as well as water color but never painted in oils. Blake wrote that from a very early age he saw visions of angels and ghostly monks and that he saw and conversed with the Virgin Mary, the angel Gabriel, and various historical figures. According to Kathleen Raine, W. B. Yeats thought of Blake as a Rosicrucian initiate, while Swinburne “praised him as the champion of evil.” Raine also said that Blake believed that much of his visionary poetry was “dictated” to him: “the authors are in eternity.” Raine states, “Blake’s genius was perhaps principally that of a creator of myths. When we think of Blake, we think of a living world of gods and demons in the continuous activity of their uninhibited energy. His pantheon of spiritual beings, or energies, whose names he himself invented, seems to exist in its own right no less than the pantheons of Greece or of Egypt, independently of those works in which the gods are depicted.”

Blake had many visions that have been described as perceptions of the collective unconscious. He claimed that these visions came to him spontaneously. They also came with a speed and energy which he said was far beyond his ability to adequately record them. He read as much as possible of the alchemical, Hermetic, and Neoplatonic texts, and as a young man Blake was a member of the Swedenborgian New Church. He was familiar with the works of Paraclesus, Fludd, Thomas Vaughan, Cornelius Agrippa, and of the mystic Jacob Boehme. He worked on the engravings of Jacob Bryant’s New System of Mythology.

In 1717, John Toland assembled a line of delegates from Bardic and Druidic circles to form the Universal Druid Bond and from this, he formed what was known as the line of Chosen Chiefs. These chiefs were to include Toland himself, Dr.

William Stukeley the antiquary, Lewis Spence, and William Blake. There is evidence of a profound knowledge of English history and poetry to be found throughout Blake’s work. William Butler Yeats believed that Blake had access to the secrets oral traditions of the Rosicrucians and brief extracts from Blake’s works were included in the rituals of the Hermetic Order of the Golden Dawn (of which Yeats was a member).

Famous among Blake’s “Prophetic Books” are The Book of Thel (1789), The Marriage of Heaven and Hell (1790), The Book of Urizen (1794), America (1793), Milton (1804–8), and Jerusalem (1804–20). Among Blake’s later artistic works are drawings and engravings for Dante’s Divine Comedy and the 21 illustrations to the Book of Job, which was completed when he was almost 70 years old. Blake died on August 12, 1827, leaving behind no debts. He was buried in an unmarked grave at the public cemetery of Bunhill Fields. Though generally dismissed as an eccentric during his lifetime, today he is highly rated both as a poet and an artist.

Blake’s first verse collection, Poetical Sketches (1783), was optimistic in spirit. He welcomed the Great French Revolution (in the unfinished narrative poem The French Revolution, 1791), and sided with the democratic London Corresponding Society. His poetry collection Songs of Innocence (published in 1789) glorifies the joy of life, but Songs of Experience (1794) is permeated with dark moods. The satirical collection Proverbs of Hell (1793) frequently has anti-church overtones. In the Illuminated Books (1789–1820), Blake used mythological and biblical images to reflect the events of the French Revolution and the American War for Independence. As an artist, he illustrated his own poems with watercolors and engravings (Songs of Innocence, 1789; The Book of Job, 1818–25, published in 1826; and Dante’s Divine Comedy, 1825–27). His art tends toward romantic fantasy and symbolism and toward philosophical allegories; it is audacious in its arbitrary play of lines. Blake’s poetry is a transition from enlightenment to the romanticism of J. Keats and P. B. Shelley. The 200th anniversary of Blake’s birth was marked in 1957 following a decision of the World Peace Council.