Israel reached its height of political power about 1000 BCE. Under the rule of King Solomon, Jerusalem was enlarged, a palace and the first great Temple were constructed, and a wall was built surrounding the city. Part of the wall still stands. The bottom two or three courses of stone along one side of the ancient city were preserved and are today a revered holy place where people flock to pray. Called the Wailing Wall because of the very vocal tradition of Hebrew prayer, and also known as the Western Wall for its directional position, Jews and tourists of many religious traditions can be found there at all times of the day. Wearing the traditional yarmulke, or skullcap, worn to cover the head while praying, most of them reach out to touch the ancient stones, writing their prayer requests on slips of paper to tuck into 3,000-year-old crevices. For those who can't get there in person, a fax machine has been set up to convey prayers to the Almighty. 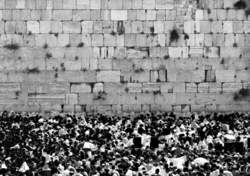 Also known simply as the Western Wall, the Wailing Wall is a ruin of the Jewish Temple in Jerusalem that was destroyed by the Roman Empire. In modern times it has become an important pilgrimage site, as well as a point of political contention between Jews and Palestinian Muslims. Getty Images.

The Wailing Wall is a 190-foot portion of the western retaining wall of the Temple Mount in Jerusalem. It is a traditional site used by Jews for prayer. The significance of both the Wailing Wall, and the larger Western Wall of which it is a part, requires some explanation.

In 70 CE, the Romans destroyed the Jewish Temple on the Temple Mount in Jerusalem that had been the center of Jewish ritual activity. From that time until 1967, Jews were denied access to the Temple Mount by a succession of Roman, Christian, and Muslim rulers. At the same time it was believed by many that the Shekinanh (Divine Presence) that had been focused in the holy of holies (the innermost part of the Temple) had not departed from the temple site. The only part of the temple that remained, and that was still accessible, was the Wailing Wall. It took on a new significance as Jews, who had been scattered throughout Europe and Asia after the temple’s destruction, began to resettle Jerusalem in the sixteenth century.

The name “Wailing Wall” derives from the content of the prayers of those Jews who came to the Temple Wall and lamented the destruction of the temple. The term “Wailing Wall” is actually quite new, having come into use only in the twentieth century during the time of British rule of Palestine.

In the nineteenth century, the wall began to symbolize Jewish hopes for the reestablishment of a Jewish state that would include Jerusalem. In the preceding millennium, Muslims had established themselves on the Temple Mount. Then, in 1947, as the fighting that led to the founding of the state of Israel proceeded, Muslims were able to maintain their control of the Old City of Jerusalem. Following the cease-fire in 1948, Muslims denied Jews access to even the Wailing Wall. The situation did not change until 1967, when, during the Six-Day War the Old City was incorporated into modern Israel.

In the aftermath of the Six-Day War, the open space in front of the Wailing Wall was cleared and large numbers of Jews gathered daily at thesite. Focus shifted from just the Wailing Wall to the entire retaining wall, now called the Western Wall. This entire wall has become the object of contention in the continued negotiations between Palestinians and Jews since 1967. Jewish believers gradually dropped the term “Wailing” Wall, saying that after 1967 the access to the site, not to mention the very existence of Israel, is a matter of celebration.

Today, the wall has become a major destination for travelers to Jerusalem. People may be found there almost 24 hours a day. It is especially crowded on the anniversary of the destruction of the temple (Tisha B’Av in the Jewish calendar) and on the several festival days mentioned in the Torah and tied to pilgrimages to Jerusalem. It has also become a matter of contention between Orthodox Jews, who largely control religious matters in Israel, and the growing number of Reform and Conservative (and even secular) Jews. Orthodox Jews favor giving privileges to male believers so that only they have access to the wall. The dissenting groups want it open to all.

Those who do make it to the Western Wall will often leave written prayers in the openings in the wall, a symbol of their belief in the continuing Divine Presence localized in this spot.

Feedback
Flashcards & Bookmarks ?
Please log in or register to use Flashcards and Bookmarks. You can also log in with
Flashcards ?
My bookmarks ?
+ Add current page to bookmarks
Mentioned in ?
References in periodicals archive ?
Crosby said her favorite site was the Wailing Wall.
In pursuit of the Holy Land Chester residents make pilgrimage to Israel Pilgrimage
SACRED Icons at Jerusalem market and below, the Wailing Wall. Left Masada - your chance to trump Trump
Israelly fantastic; From bustling Tel Aviv to a dip in the Dead Sea, Claire Murphy finds a week's break that will leave you buoyant
Before coming to the al-Aqsa mosque, Pope visited also Israel's Wailing Wall and Yad-Vashem genocide monument.
Pope visits al-Aqsa mosque in Jerusalem
Stark black and white images reflect the fervour of naga sadhu s at the kumbh mela , the intensity of orthodox Jews at the wailing wall and the poignancy of the pilgrims in Grabarka, Poland, with equal ease.
THE STARKNESS OF FAITH
the cracks of the wailing wall. The heart has reason, reason does not
December 8
The sprawling 17-acre park is a miniature holy city, complete with a fake palm trees, centurions, and a Wailing Wall. It takes visitors through 36 events in the Messiah's life for a small fee, the New York Daily News reported.
Argentinean Christian theme park brings Jesus' resurrection back to life
[paragraph] The Bear is a rolling, stormy, liquid Wailing Wall for trophy-trout enthusiasts.
Placid water stretched across the seventh largest lake in the world
Lionel Messi at the Wailing Wall in Jerusalem Lionel Messi did what many celebrities do when they visit Jerusalem ( including Diego Maradona in 1995)-- they write some prayers and pray at the wailing wall.
Messi makes things messy by wearing a Jewish yamaka
straight to the Wailing Wall yard and highlighted the closing down of
Newspapers Review: Dailies Highlight Hamdallah's Resignation
All she did was praying at the Wailing Wall with a prayer shawl," wrote Yonatan Nir.
Sarah Silverman's Sister, Rabbi Susan Silverman, Detained In Israel For Wearing Prayer Shawl At Western Wall
Asked about the symbolic Wailing Wall, erected next to Israel's stall, he explained:
IWC Christmas Bazaar Proves Great Success, Brings the World to Bulgaria for Day