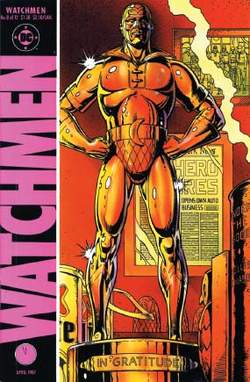 The year 1986 was a momentous one for both DC Comics and the comics industry as a whole, thanks to the release of the four-issue miniseries Batman: The Dark Knight Returns and the twelve-part Watchmen, which sold in enormous numbers and attracted unheard-of critical acclaim. Watchmen was the brainchild of the British creative team of writer Alan Moore and artist Dave Gibbons, who were established stars in their home country and were already beginning to make an impact in the United States. The original plan was to produce a twelve-issue miniseries using the Charlton Comics line of superheroes that DC had just licensed, but Moore’s radical reworking was deemed too controversial (and too terminal in some cases), so the decision was made to create a miniseries using an all-new cast, set in a separate, subtly different world. Watchmen heroes borrow from the Charlton cast, however; for example, hero Rorschach is based on Charlton’s the Question. Watchmen ran for twelve issues from September 1986 to October 1987.

Moore’s script was set in a parallel universe from the early 1940s to the mid-1980s. Opening with a murder mystery and closing with a thwarted nuclear holocaust, Watchmen posited what it would be like if superheroes were real, how they would affect the world around them, and how everyday people would react to them. Moore created a world previously unexplored: superheroes who were morally ambivalent. What set Watchmen apart from typical superhero comics of the day was the insight of Moore’s scripting— though Gibbons’ elegant, detailed artwork made an enormous contribution as well. Moore crafted a complex story, with layers of meaning and depth of characterization never before seen in the superhero genre, drawing heavily on irony, symbolism, and multiple perspectives to tell his tale. Meant “to be read on a number of levels,” according to Moore, “different little threads of continuity are effectively telling the same story from different angles.”

In many respects, Watchmen was effectively the first postmodern superhero comic, examining the motivations, foibles, and desires that might drive people to don garish costumes and risk their lives each time they went on patrol. When describing his hero Rorschach, Moore admitted he “was to a degree intended to be a comment upon the vigilante super hero, because I have problems with that notion. I wanted to try and show readers that the obsessed vigilante would not necessarily be a playboy living in a giant Bat-cave under a mansion. He’d probably be a very lonely and almost dysfunctional guy in some ways.” The series asked the question: If you had immense power, how would you use it? In the case of the sadistic Comedian and the sociopath Rorschach, power amplified and fed the characters’ natural violence. For Dr. Manhattan—a being with almost limitless powers—it led to a growing isolation and indifference toward both his girlfriend (the reluctant superheroine Laurie Juspeczyk, a.k.a. Silk Spectre) and his fellow men; this alienation was well demonstrated by his move to Mars. For the “smartest man alive,” Ozy-mandias, power forced on him the messianic role of the world’s savior; indeed, in the series’ denouement, he does prevent an impending apocalypse, albeit in a shocking way.

Watchmen was very much a product of its time, set against the background of the cold war and the ever-present real-life threat of nuclear devastation, but nevertheless it is still compelling reading in the twenty-first century. Within a year of the series’ completion, it was released as a book, and multiple printings later is still in print in 2004. Together with The Dark Knight Returns, it laid the foundations for the graphic novel explosion and the massive growth of comic book collections that have transformed the industry. It also prompted the release of Watchmen posters, portfolios, badges, and T-shirts. There were persistent rumors of a film, but the critic Douglas Wolk insightfully noted in 2003 that “Watchmen … has been notoriously resistant to attempts to adapt it into a workable screenplay: its narrative about aging superheroes and nuclear panic is so deeply rooted in the comics form that it could no more be filmed than, say, Citizen Kane could be adapted into a novel.”

Nevertheless, Warner Bros. released a Watchmen film in 2009. Directed by Zack Snyder, it had a large cast, including Malin Akerman as Silk Spectre II, Billy Crudup as Dr. Manhattan, Carla Gugino as Silk Spectre I, Matthew Goode as Ozymandias, Jackie Earle Haley as Rorschach, Jeffrey Dean Morgan as the Comedian, and Patrick Wilson as Nite Owl. The film was quite faithful to the plot and visual style of the original comics series, but within its 162-minute length could not fully explore the series’ thematic depths. Critical reaction was divided, and the movie performed commercially below Warner Bros.’ high expectations.

Moore and Gibbons still enjoy enormous popularity among comics enthusiasts, though both have refused all requests for a sequel, preferring to let the original comic stand on its own. In its wake, however, Watchmen has inspired such series as Kurt Busiek’s Astro City, Alex Ross and Mark Waid’s Kingdom Come, and countless other comics. Indeed, the Watchmen’s deconstruction of the superhero myth was so seductive that it had a profound impact on the industry as a whole. —DAR

Feedback
Flashcards & Bookmarks ?
Please log in or register to use Flashcards and Bookmarks. You can also log in with
Flashcards ?
My bookmarks ?
+ Add current page to bookmarks
Mentioned in ?
References in periodicals archive ?
Ball did an in-store appearance at That's Entertainment, 244 Park Ave., and while he was there signed covers of the "Watchmen" graphic novel.
Smiley face connection
In fact Watchmen is probably the most adult superhero movie we will see for a long time.
Superheroes adventure is smokin' COMIC BOOK MASTERPIECE
Watchmen is set in an alternate 1985 America in which costumed superheroes are part of the fabric of society, and the Doomsday Clock, which charts the tension between the US and the Soviet Union, moves closer to midnight.
Stars out for Watchmen premiere
According to residents, it is the watchmen of these buildings who are brokering the deals.
Housing scam revealed: Office space invaders
Due to a passing shower, watchmen stationed on the wing decks to the right and left of the bridge were called inside the bridge.
Japanese editorial excerpts -2-
Watchdog organizations that monitor hate groups are sounding the alarm about the spread of the "Watchmen on the Walls." The movement, based in Latvia, Ukraine, Russia and other countries in that region, blends fundamentalist Christianity with virulent hatred of gays.
Extremist 'Watchmen' seek to make inroads with U.S. Religious Right
Alan Moore's The Watchmen is a staple of graphic novel core lists.
Misconceptions about graphic novels
Two village watchmen in Quezon City were arrested Tuesday for allegedly
Two QC watchmen arrested for extortion
A memorial service will be held for six watchmen who were hacked to death at Kilingili market in Kakamega by a gang.
Memorial for six watchmen killed in Kakamega
After killing the watchmen, the assailants took away a tractor-trolley parked there.
Man kills brother over property dispute
Ano called on barangay chairmen on Tuesday to ensure that no barangay tanod (barangay watchmen) under their supervision will be armed with guns even in the performance of their duties.
No guns and only nightsticks for barangay watchmen-Ano
The Public Attorney's Office (PAO) has decided to provide legal assistance to one of the two wounded victims in the shooting incident in Mandaluyong City last December 28 instead of the 10 policemen and three barangay watchmen involved in what was reported to be a case of mistaken identity.
PAO providing legal aid to wounded victim in Mandaluyong shooting