a mechanical gear, friction, or worm transmission is which rotation is transmitted and trans-formed by the cyclical excitation of strain waves in a so-called flexible element (hence the name“wave transmission”). The American engineer W. Musser invented the wave transmission in 1959.

The most common wave transmission is the gear type (see Figure 1), which usually consists of a rigid element—a gear wheel with internal teeth, which is immovably fastened to the transmission’s housing; a flexible element—a cylindrical, thin-walled pinion in the shape of a cup with external teeth 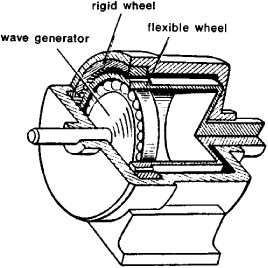 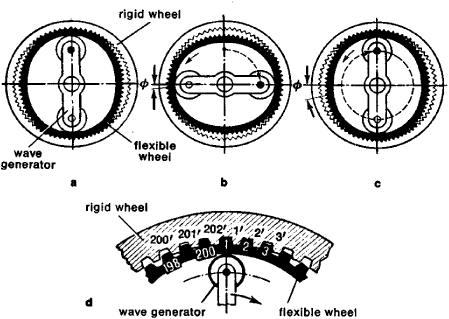 rotating rigid wheel. In this

case and the generator and the output shaft rotate in the same direction. One of the principal features of the wave transmission is the possibility of obtaining a high gear ratio in one stage. The wave reducers being produced serially in the United States (1970) have gear ratios of 60-320 : 1. Because of the small difference between the diameters of the flexible and rigid wheels and the flexibility of one of the elements, 10-50 per-cent of the teeth mesh at any one time—that is, multiple-pair engagement takes place—which makes possible the use of a wheel with a low engagement factor. Wave transmissions are able to transmit a torque several times greater than other gear transmissions of the same size and weight, and they are considerably more compact than gear transmissions of other types with the same load capacity. The efficiency of gear wave transmissions is usually 80-92 percent. They are smooth and shockless, have greater kinematic precision, and permit engagement without backlash. They can operate both as underdrive (reducer) and overdrive (multiplier) transmissions. The flexible wheels of wave transmissions are usually made of metal with a high endurance limit or of various plastics obtained by injection molding. There are designs for gear wave transmissions with an externally mounted wave generator; in this case the rigid wheel is positioned inside of the flexible wheel. The flexible wheels of wave transmissions are fabricated in the form of diaphragms, cones, spheres, bells, narrow rings, or tubes, which are joined to the output shaft by splines. Wave transmissions may also have pneumatic and hydraulic wave generation, in which radially positioned plungers supplied through a pressure-distributing device perform the function of the cam. This type of trans-mission has low inertia because there is no rapidly rotating generator. It is possible to transmit rotation with a wave transmission through a blank metal wall into or from a closed, hermetically sealed space. The flexible wheel of a sealed wave transmission is usually in the form of a bell with two headers, one of which is secured to the transmission’s housing. The wave generator is inside the bell, and the rigid wheel, which is attached to the output shaft, is outside. Another design possibility is a sealed wave transmission with the rigid wheel inside and the generator outside. The so-called responsin occupies a special place among gear wave transmissions. A prototype of this device is the low-speed electric motor with a flexible rotor invented by the Soviet engineer A. I. Moskvitin in 1944 for a reducerless drive. There are no rapidly rotating parts in a responsin, and consequently no known actuator used in servo systems and similar mechanisms can equal it in speed of operation.

where Pfand Pr are the perimeters of the contacting surfaces of the flexible and rigid elements respectively. They are used as speed regulators (see Figure 3). 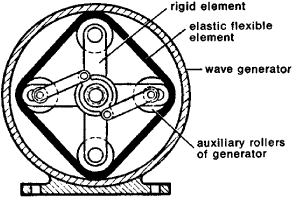 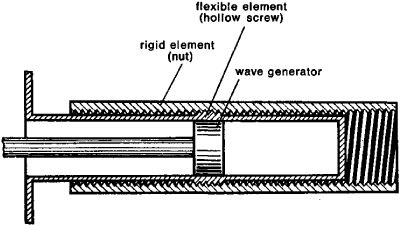 Sometimes wave couplings, which transmit rotation through a cylindrical shell to a hermetically sealed space and have a gear ratio of 1 : 1, are also included among wave transmissions.

Feedback
Flashcards & Bookmarks ?
Please log in or register to use Flashcards and Bookmarks. You can also log in with
Flashcards ?
My bookmarks ?
+ Add current page to bookmarks
Mentioned in ?
References in periodicals archive ?
Founded in 1984, EZ Form Cable Corporation is a designer and manufacturer of RF, Microwave and Millimeter wave transmission line solutions for critical applications in defense, aerospace, communications, medical, and high-performance instrumentation.
TPC acquires EZ Form Cable
The PREIC in 1963 agreed that the radio station will have medium wave transmission for the Philippines, which is the Radio Veritas 846, and short wave transmission for overseas.
Pope tells Radio Veritas Asia: Be a channel of love, voice of the poor
TOKYO, Feb 19, 2019 - (JCN Newswire) - NEC Corporation (TSE: 6701) has announced the successful completion of the first ETSI Millimetre Wave Transmission (mWT) Plugtests event for demonstrating the interoperability of SDN solutions for microwave and Millimetre-wave transport applications.
NEC Passes the First ETSI Millimetre Wave Transmission (mWT) Plugtests Event
While in acting in the same frequency band, ultra wideband do not get distracted by carrier wave transmission as well as conventional narrowband.
Ultra-Wideband (UWB) Market: Market Dynamics and Restraints
In areas like Siachen, where our troops are stationed, there is no other mode of transmission possible to link them with the rest of the country except the AM (often called the medium wave transmission).
Dark days for Radio Pakistan
The MXene antennas were 50 times better than graphene and 300 times better than silver ink antennas in terms of preserving the quality of radio wave transmission.
Spray-On Antennas for Smart, Connected Tech
This is due to the basic properties of the diffraction phenomenon: the wave is more likely to be able to avoid the barrier in the form of an elliptical tunnel cavity, if the major semiaxis of the cross-section coincides with the direction of wave transmission.
TRANSMISSION AND DIFFRACTION OF IMPULSE WAVES IN FOAM MEDIA WITH CAVITIES
Zhao, et al., "Asymmetric electromagnetic wave transmission of linear polarization via polarization conversion through chiral metamaterial structures," Physical Review B, Vol.
A Wide-Angle and Wide-Band Circular Polarizer Using a Bi-Layer Metasurface
studied the effects of JMC and spatial geometries of the joint on wave transmission by the modified SHPB experiment [23].
Effects of Geometrical Parameters on Stress Wave Propagation across the Rough Joint
It is expected that the proposed manner of wave transmission and the corresponding conclusions can be useful for extension applications of optical control, especially for optical communication and optical encryption technique.
Propagation Properties of Airy Beam through Periodic Slab System with Negative Index Materials
Wave transmission by partial porous structures in two-layer fluid.
Water-waves Scattering by Permeable Bottom in Two-layer Fluid in the Presence of Surface Tension