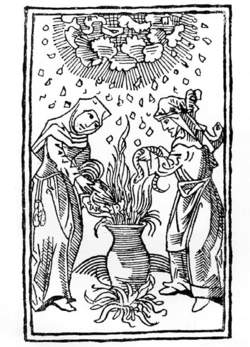 Witches place a cock and serpent in their broth to cause a hailstorm, c. 1489. Courtesy Fortean Picture Library.

For hundreds of years Witches have been thought to have the power to control the weather. In Francesco-Maria Guazzo's Compendium Maleficarum of 1626 he reported, "Witches have confessed that they made hailstorms at the sabbat, or whenever they wished, to blast the fruits of the earth. To this end, according to their confessions, they beat water with a wand, and then they threw into the air or into the water a certain powder which Satan had given to them. By this means, a cloud was raised which afterwards turned to hailstones and fell wherever the witches wished. When water was lacking, they used their urine."

At Agnes Sampson's trial in Scotland, January 27, 1591, she testified that one of her coven, Marion Lenchop, was told, "You shall warn the rest of the sisters to raise the wind this day, at eleven hours, to stop the Queen from coming to Scotland." At their meeting, she said, they "should make the storm universal through the sea." Others at that same trial gave evidence to the storm raising that was done and in fact a great storm did come up and threaten the ship carrying King James I (James VI of Scotland) and his young bride. Sampson claimed that in order to raise the storm the witches tied limbs from a dead man—retrieved from a grave—to the four legs of a cat and cast the cat into the sea, shouting, "Haill, hola!" and "Hola!" Records of the trial claim "There did arise such a tempest in the sea, as a greater hath not been seen."

Fifth century Greek historian Herodotus, in his History of the Persian Wars, said, "At length the Magi, having sacrificed victims and endeavored to charm the winds by incantations, and moreover, having offered sacrifices to Thetis and the Nereids, laid the storm on the fourth day."

In Shakespeare's Macbeth, one of the Weird Sisters threatens to toss the ship Tiger about on the seas in a violent storm for nine-times-nine weeks, to extract vengeance on a sailor. In old Anglo-Saxon England, according to Oswald Cockayne's three volume Leechdoms, Wortcunning and Starcraft of Early England (1864-1866), there were charms and spells to calm a storm, to drive away hail, and to control the winds.

Archbishop Theodore of Canterbury, in 700 CE, published the Liber Poenitentialis, in which he ordered five years' penance, with one year on bread and water, for anyone causing storms. Archbishop Agobard of Lyons (c. 840 CE) published a tract "against the Foolish Notions of the People about Hail and Thunder" in which he complained bitterly about "weather wizards" of the time who could "not only bring on storms but also can protect the inhabitants from them."

In the sixteenth century and beyond, Witches sold knotted ropes to sailors, claiming that they had conjured winds into the knots. If the sailor found his ship becalmed he had only to undo a knot to get wind. Untying one knot would give a gentle breeze; two knots a strong, steady wind; three knots a gale force wind.

In the twelfth century the poet Sumner, in his Last Will and Testament, wrote:

In Ireland and in Denmark both Witches for gold will sell a man a wind, Which in the corner of a napkin wrapp'd,

Shall blow him safe unto what coast he will.

Most records of Witches controlling the weather seem to focus on their ability to raise a storm, as in the case of the North Berwick Scottish witches, mentioned previously. Ulrich Molitor (Tractatus de Pythonicis Mulieribus, 1498) said that it was common knowledge that witches provoked lightning and hail. His De Lamiis et Phitonicis Mulieribus of 1489 contains an illustration of two witches casting a rooster and a snake into a bubbling cauldron to bring rain. In 1653 Henry More wrote in An Antidote Against Atheism, "But now for the truth of this, that certain words or ceremonies do seem at least to cause an alteration in the air or to raise tempests." More was a firm believer in the power of witches.

Today's Witches do believe that they are able to control the weather to a certain amount. They do not bring on dire storms and tempests, but have been known to bring sunshine when a farmer has needed fair weather to get in his harvest. The coven of Lady Olwen performed such a conjuring on the Isle of Man in the 1960s.

Feedback
Flashcards & Bookmarks ?
Please log in or register to use Flashcards and Bookmarks. You can also log in with
Flashcards ?
My bookmarks ?
+ Add current page to bookmarks
References in periodicals archive ?
How he finally manages to achieve his re-discovered snow spell, and what a funny scene ensues caps this unusual version of weatherworking for the snowbound.
The Blizzard Wizard
Encyclopedia browser ?
Full browser ?
CITE
Site: Follow: Share:
Open / Close