The joining of two or more metallic components by introducing fused metal (welding rod) into a fillet between the components or by raising the temperature of their surfaces or edges to the fusion temperature and applying pressure (flash welding).

Because welded joints are usually exposed to a complex stress pattern as a result of the high temperature gradients present when the weld is made, it is customary to design joints by use of arbitrary and simplified equations and generous safety factors. The force F of direct loading, and consequently the stress S, is applied directly along or across a weld. The stress-force equation is then simply F = SA, in which A is the area of the plane of failure (Fig. 2). For eccentric loading, the force F causes longitudinal and transverse forces of varying magnitudes along the weld. See Structural connections

a segment of a structure or article where parts are joined by welding; the joined parts may be of the same material or of different materials.

Classification of joints and welds. The relative positions of the joined components are the basis for the various categories of joints: butt joints, T-joints, lap joints, and corner joints. Each type of joint has specific characteristics that depend on the welding method chosen, whether arc welding (Figure 1), electroslag welding (Figure 2), resistance welding (Figure 3), or some other method. The segment of the welded joint directly connecting the components being welded is called the weld. All types of welds can be classified according to the metal-deposition technique used as single-pass welds, welds formed from the center toward the ends, and welds formed by backstep welding. Welds can be also distinguished by the spatial positioning during welding as vertical, horizontal, downhand, and overhead welds. Welds can also be classified according to the method by which their cross sections are formed as single-layer and multilayer welds. State and industry standards specify the basic types of welded joints, the structural components of edges and welds, and the tolerances and feasible ranges for the thicknesses of the components beingjoined. These data apply to all types of welds.

Characteristics of welded joints. A welded joint contains a number of zones formed in the material of the welded components. These zones differ from the base material and among themselves in chemical composition, structure, physical and mechanical properties, microstressing, and macrostressing. A welded joint made by fusion welding (Figure 4,a) exhibits a zone containing the weld metal, a fusion zone, a heat-affected zone, and a zone where the properties and structure of the base metal remain unchanged. A welded joint formed by pressure welding (Figure 4,b) does not have a zone containing weld metal or a fusion zone. It consists of a joint zone, in which interatomic links have been formed between the joined components, a mechanically affected zone, and a zone of the adjacent base metal.

The material in the weld may consist of an alloy formed by the melted base material, the electrode material, and/or filler material, or it may consist solely of the melted base metals. In the heat-affected zone, the base metal does not undergo melting; however, in individual sections of this zone the effects of heating and cooling can change the properties and structure of the base metal in various ways. In the general case of fusion welding of low-carbon steel, the heat-affected zone of a welded joint consists of the sections shown in Figure 5. The overheated section (I) directly adjoins the fusion zone. The material in this section has been heated to a temperature above 1100°C and has acquired a coarse-grained structure; consequently, the strength of the material has been lowered. In the grain-refined, or normalized, section (II), the material has been heated to temperatures in the range of 900°-1100°C; this heating causes a reduction in grain size and an increase in strength. In the partially grain-refined section (III), the metal has been heated to temperatures in the range of 700°-900°C. The metal in this section is characterized by a nonhomogeneous structure or partial grain refining. In the recrystallized section (IV), the metal has been heated from 500°C to a temperature corresponding to the critical point A1, which causes a reduction in strength and, sometimes, plasticity. In the aging section (V), the metal has been heated to temperatures of 100° to 500°C; it does not exhibit any visible structural changes but differs from the original base metal by its lower strength, which is most strongly pronounced in the temperature range of 100°-300°C. The width of the heat-affected zone during welding depends on the welding method, the technological process, the thermal conditions, and the thermal and physical properties of the base metal. 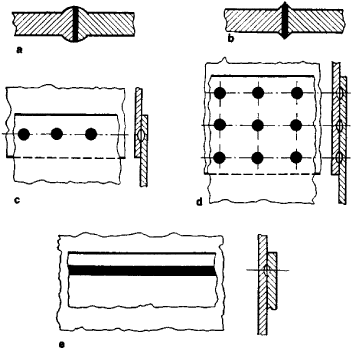 qualify as soft layers. They include the properties of the base metal and welding materials, the methods and conditions for welding and heat treating, and the temperature and rate at which loads are applied. The weld itself, the fusion zone, the weakened sections of the heat-affected zone, and the interspersed layers of other nonbase metals may be soft layers. Deformations are localized in the soft layers. If the layers are extremely thin, the deformations do not lower the load-carrying capacity of the welded joint. However, if soft layers are relatively thick, the load-carrying capacity of the welded joint is limited by the properties of the soft layers.

In designing and fabricating welded structures, it is necessary to take into account the influence of the stress-strain state on the operational condition of welded joints, the accuracy of joint dimensions and shapes, and the stability of such properties during actual use. In a stress-strain analysis, a distinction is made between the zone of plastic deformations, the zone of elastic deformations, and intrinsic residual stresses, both tensile and compressive. Diagrams of temporary and residual longitudinal deformations and stresses in the butt joint of a plate made of carbon steel are shown in Figure 6.

The resistance of welded joints to failures caused by brittleness or fatigue depends on the properties of the metal and on the presence of stress concentrators and deformation concentrators in the metal. Some concentrators are part of the design of a joint, for instance, sections where the cross section of a joint changes abruptly, as in a transition from the weld metal to the base metal in a T-joint or lap joint. Others are formed by the production process, for example, abrupt transitions with reentering angles where the weld is reinforced, poor penetration, incomplete coalescence, and cuts. Still other concentrators may have a physical or chemical origin, such as pores, slag inclusions, and cracks in the welds or the heat-affected zones.

The formation of a welded joint is accompanied by a thermoplastic process of deformation of the base metal. This process is most clearly exhibited in welded steel structures; it causes brittleness in some areas of the heat-affected zone. The greatest degree of brittleness is caused by aging that occurs during the deformation process of the metal at temperatures of 150°-300°C. In the aging sections, the welded joints exhibit a limited resistance to failure caused by brittleness. 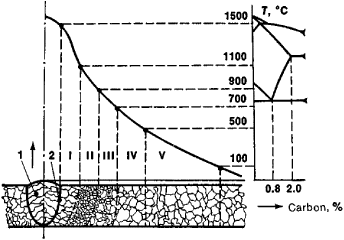 During the formation of a welded joint, the dimensions of the components being joined are reduced, both in the longitudinal direction and the transverse direction. This shrinkage is taken into account in designing and fabricating welded objects.

Design principles for welded joints. Two methods for calculating the strength of welded joints under static loads are used in the USSR: the limit-state method, used in civil engineering, and the method of permissible stresses, used in machine building.

Industrial standards and design norms for structures specify the design values of welded joints made of steel of various strengths. The values include tensile strength

, and shear strength in fillet welds

, as well as the permissible tensile and compressive stresses σw and shear stress τW. The calculation of fatigue effects on welded joints in the metal structures of machines is made according to generally accepted methods of fatigue calculation for machine parts. The effects of low temperatures on the operational condition of welded joints can be taken into account in the design and fabrication stages by the choice of appropriate base metals and welding materials, by correct design and selection of adequate processes and by material quality-control methods.

In calculating the strength of welded joints under static loads, the effects of stress concentrators and of temperature are usually negligible for commonly used carbon steels and low-alloy steels. In calculating the fatigue strength of welded joints, the effects of stress concentrators and residual stresses are taken into account by specifying the values of permissible stresses. The limit-state method is used to calculate the fatigue resistance of welded joints in bridge spans and in industrial steel structures. welded joints
A gastight joint obtained by uniting metal parts, such as iron and steel that require welding, in the plastic or molten state.
McGraw-Hill Dictionary of Architecture and Construction. Copyright © 2003 by McGraw-Hill Companies, Inc.

Feedback
Flashcards & Bookmarks ?
Please log in or register to use Flashcards and Bookmarks. You can also log in with
Flashcards ?
My bookmarks ?
+ Add current page to bookmarks
Mentioned in ?
References in periodicals archive ?
The components of the welded joint were meshed using element type C3D8R.
Strength and Microstructure Analysis of Spot Welded Joints between a Sheet and a Nut of Different Steels
4) may be considered as weakening of particular welded joint zone relative to the base metal; e.g.
Mechanical Properties of Heat-Affected Zone of High-Strength Steel Welds
Xiao, "Fatigue properties of ferrite/bainite dual-phase X80 pipeline steel welded joints," Science and Technology of Welding and Joining, vol.
Low-Cycle Fatigue Properties of the X70 High-Frequency Electric-Resistant Welded Pipes
In this work, a SVET method provided further valuable information on different microstructure of the welded joints and evaluated the corrosion resistance of the welded joint.
Corrosion Behavior of Welded Joint of Q690 with CMT Twin
Due to all the above-mentioned peculiarities of welded joints, this approach should only be used in consideration of stress-strain cyclic properties of the base material in a welded joint [27].
Review of Fatigue Assessment Methods for Welded Steel Structures
Comparative Study of the Mechanical Properties of (FS) and MIG Welded Joint in (AA7020-T6) Aluminum Alloy.
Formability of friction stir welded and processed AA 2024-O aluminum alloy sheets
Also, the welded joints of pipes used in this study were made manually by welding electrodes (brand SSSI-13/55).
Fatigue and brittle fracture of carbon steel of gas and oil pipelines
In its newly-enlarged optical suite, Keighley Labs offers metallographic inspection of sections of welded joints, at macro levels up to 50x magnification and micro examinations up to 1000x, employing powerful stereo microscopes.
Testing keeps welds safe: Keighley's test & inspection service ensures welds are fit for purpose
Charpy V notch impact test was carried out to evaluate the toughness of the welded joints at 0[degrees]C.
Development of agglomerated acidic flux for submerged arc welding/Aglomereeritud happelise rabusti valjatootamine kaarkeevituse jaoks
The distinguishing special feature of the composite consumable electrode is the higher electrical resistance as a result of the presence of a large number of welded joints between the welded elements.
Production of ingots of KhN73MBTYu creep-resisting alloys by electroslag remelting of rolling production waste
Poisson's ratio of main steel in full thermal ranges is taken equal to 0.3 and is the same as in welded joint.
Determination of residual welding stresses in load bearing structures made of welded hollow sections/Liekamuju itempiu nustatymas apkrovas perimanciose konstrukcijose, pagamintose is suvirintu vamzdiniu profiliu/Paliekoso metinasanas spriegumu noteiksana nesosa konstrukcija no slegta proila metinatam dalam/Keevitamise jaavpinge maaramine koormust kandvates keevitatud ooneskonstruktsioonides
Research plan will continue with studying the influence over traction resistance for spot welded joints as well for the distance on longitudinal and across direction for different spot welding arrangements.
Traction behaviour simulation of spot welded