town (1991 pop. 9,252), Somerset, SW England. Primarily a cathedral town, it has changed little since medieval times, although shopping and tourism have become important. The first church was erected by King Ine of Wessex in the early 8th cent. The earliest part of the present cathedral dates from 1176. The towers were built in the 14th cent., much of the woodwork dates from the 15th cent., and there are more than 300 13th-century sculptured figures. The grounds of the bishop's palace include ruins of the original 13th-century structure and the complete 14th-century moat and wall. A theological college is in Wells.
The Columbia Electronic Encyclopedia™ Copyright © 2013, Columbia University Press. Licensed from Columbia University Press. All rights reserved. www.cc.columbia.edu/cu/cup/ 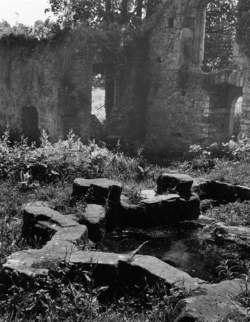 In pre-Roman times vital sources of water were believed to be the dwelling places of powerful gods and goddesses. Especially revered were those sources where the water was mineral-rich, possessing curative powers, an example of which could be found at Bath, Somerset, England, where even today people still go to "take the waters." The baths there were dedicated to the Romano-British goddess Sulis. Similar curative waters at Buxton, in Derbyshire, were dedicated to Arnemetia. Even the coming of Christianity could not stamp out the faith the people had in these waters and their deities. References to the goddess patron at Bath changed from "Lady of the Well" to simply "Our Lady." At Buxton, St. Anne replaced the goddess Arnemetia, but otherwise the popularity of the magical springs continued.

Many other wells and springs flourished and still flourish around Britain and continental Europe. St. Winifred's Well, in Flintshire, continues to attract people, and the partly abandoned well (reputedly haunted by a stag-headed deity) at Pilleth, in Radnorshire, is still visited on occasion. Because of the depth of the water in many wells, many believed that they acted as a conduit to the underworld and to the spirits who dwelled there.

Not all wells were known for the curative powers of their waters. Some were credited with the power to foretell the future, some for granting wishes, some for placing curses, and some simply as a sacred place to honor the gods. The innumerable coins and other objects that archaeologists have found when excavating such wells (some objects dating from prehistoric times) attest to the belief that it was necessary to placate the gods, or pay for sought-after favors. Even today the desire to toss a coin into any well and make a wish is ingrained in many people.

One method of honoring the gods was to "dress" the well. This was done by tying a rag (usually red) known as a clout to any tree or trees close to the well. Green boughs, branches, and flowers were also lain about the well. This practice often coincided with a particular day of the year, perhaps a day special to the individual well or else one of the old Pagan holidays, or Wiccan Sabbats. Well dressing in England today is most common from May through to August. In May wells are dressed at Etwall, Tissington, and Wirksworth; at Ashford-in-the-Water, Hope, Monyash, Tidewell, Buxton, Litton, Breaston, Rowsley, Youlgreave, Bakewell, and Edlaston in June; at Ault Hucknall, Dore, Stoney Middelton, Whitwell, Pilsley, Heath, and Holmewood in July; and at Barlow and Bradwell in August.

John Arbrey, in Three Prose Works (1688-1697), related how the civil war in England forced the people of Droitwich, in Worcestershire, to desert their well. Apparently as a result of this abandonment, the well dried up. The villagers immediately tried to revive it, by again dressing it and honoring the deities. Aubrey said, "notwithstanding the power of the Parliament. . . the Minister there and also the Soldiers, they did and will dress it, and the water returned again."

Even today well dressing continues in many parts of the British Isles. The Church even sponsors some of the dressings, saying that they are "symbols of Thanksgiving to the Almighty for the precious gift of drinking water." The longest established well dressing is at Tissington, in Derbyshire, where the local church in 1899 erected a highly Christian decoration around the ancient site.

The beginning of the nineteenth century saw a revival of interest in well dressing. This practice has evolved from a motley collection of rags tied to branches and boughs laid about the site to a community project to construct an elaborate decoration—sometimes as much as twelve feet high—that stands around the well. This decoration has a clay base into which innumerable flower petals, leaves, pine cones, bark, and pebbles are set to construct a large and colorful picture.

a city in England, located in the county of Somerset, near Bristol. Population, approximately 6,000. Architectural works include a cathedral with elements of the Romanesque and Gothic styles, built between the 12th and 14th centuries, and a 13th-century Gothic episcopal palace with fortifications. To the south of Wells are the ruins of the 12th-century Early Gothic monastery of Glastonbury.