The impost or place where the vertical support for an arch terminates and the curve of the arch begins; the lower voussoir, or bottom stone of an arch, which lies immediately on an impost.

(full name, Axel Springer Verlag A.G.), a newspaper concern in the Federal Republic of Germany (FRG). The firm was established in Hamburg by A. Springer in 1947 and became a joint-stock company in 1970. Springer publishes several dailies, notably Die Welt, Hamburger Abendblatt, and Bildzeitung, with a circulation of more than 40 percent of the total for all dailies in the FRG. It also publishes Sunday newspapers and magazines.

Springer publications regularly print propaganda against the USSR and other socialist countries and against the communist movement and democratic forces within the FRG. 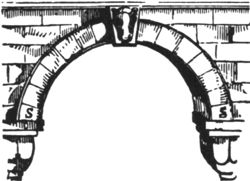 springer, 1: S
1. The impost or place where the vertical support for an arch
McGraw-Hill Dictionary of Architecture and Construction. Copyright © 2003 by McGraw-Hill Companies, Inc.

Feedback
Flashcards & Bookmarks ?
Please log in or register to use Flashcards and Bookmarks. You can also log in with
Flashcards ?
My bookmarks ?
+ Add current page to bookmarks
Mentioned in ?
References in periodicals archive ?
For Brian Schmidt, who owns UH SHR Ch Greenwood's Angus MH WDX CGC, the move to a Welsh springer was dictated by a change in his hunting.
As is frequently the case with rare breeds, one of the biggest challenges for anyone who wants to own a Welsh springer is finding one.
"The Welsh Springer Spaniel Club of American has a breeder referral on its Web site (www.wssca.com) that lists breeders in various regions of the country who are in good standing with the club and have been for at least two years.
A red, white and rare spaniel: the little-known Welsh springer is still a capable hunter