West Nile virus, microorganism and the infection resulting from it, which typically produces no symptoms or a flulike condition. The virus is a flavivirus and is related to a number of viruses that cause encephalitis. It usually is transmitted through the bite of several mosquito species, and can infect humans and more than 200 animal species, including alligators, horses, and many common birds. A number of North American bird species, including the blue jay, crow, and house sparrow, act as reservoirs of the virus.

About one fifth of humans infected with the virus develop West Nile fever, which in most people is characterized by fever, headache, muscle ache, joint pain, nausea and vomiting, and in some cases rash and swollen lymph nodes (swollen glands). Less than 1% of all persons infected may develop a severe case, progressing to encephalitis or meningitis, about a week after the initial symptoms of West Nile fever appear. Loss of vision, tremors and convulsions, paralysis, coma, and, in some cases, death may result. Older persons and persons with a weakened immune system are most susceptible to severe cases of the disease, and they may suffer from longer-term effects including weakness and fatigue, headaches, memory loss and confusion, and depression. There is no treatment or vaccine for the virus except to alleviate the symptoms; controlling the mosquitoes that carry the disease is the most effective way to limit its spread.

West Nile virus was first identified in 1937 in the West Nile district of Uganda. It was subsequently found in much of the rest of Africa, the Middle East, and warmer regions of Asia and Europe. Its first recorded appearance in the United States was in Queens, N.Y., in 1999, and it since has spread to most of the United States and neighboring areas in North America. 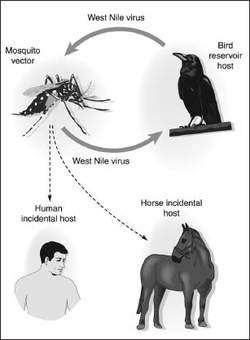 West Nile Virus is carried by mosquitoes and usually infects birds; birds harbor the virus and can spread it to animals, or the virus can also end up in humans and other animals, who do not transmit it to others but can become ill.

When summertime comes and the living is supposed to be easy, it also brings mosquitoes with West Nile virus to transform those lazy, hazy days into a season of worry about a terrible disease that has afflicted humankind.

The West Nile virus (WNV) was first identified by virologists in 1937 in the West Nile district of Uganda. If the virus originated in Africa, how did it get to the United States?

Some conspiracy theorists believe that Fidel Castro obtained West Nile virus from Communist bacteriological warfare sources, and the Cubans have been releasing hundreds of thousands of birds infected with the disease to fly into our country.

Virologists note that West Nile was reported in Egypt in the 1950s. Then, in a rather severe out-break in Israel in 1957, the virus was identified as the responsible agent in severe meningoencephalitis in elderly patients. The virus was next reported in horses in France in the 1960s. West Nile arrived in the United States in 1999 with cases of encephalitis diagnosed in horses and humans, followed by an outbreak in the New York City area. In the United States the virus is largely maintained in birds, especially crows and blackbirds. In 80 percent of people the infection causes no symptoms. In many others it causes only mild flulike symptoms. People over fifty are most liable to be at risk for the extreme reactions of encephalitis and meningitis.

In the New York area, authorities decided to spray the insecticide Malathion over certain residential areas in an effort to reduce the mosquito population. Environmentalists disapproved of the large-scale spraying, arguing that the possible deleterious effects of the chemical on people’s health far outweighed the few lives that might be saved because of it.

Conspiracists saw the hands of the CIA and the shadow government behind the virus’s evolution and heard the echoes of the New World Order’s plan to decrease the population of the planet. Some investigators are very suspicious about the fact that the alleged outbreak of West Nile on the East Coast gave the agents of deception an excuse to spray millions of mostly Jewish, black, and Hispanic residential areas.

In 1953 the army sprayed clouds of toxic zinc cadmium sulfide gas over Minneapolis on more than a dozen occasions. The reason, the citizenry was told, was to develop an aerosol screen that would protect Americans from fallout in case of a nuclear attack. Hundreds of miscarriages and stillbirths were attributed to the spray. Later it was revealed that the army was actually testing how chemicals would disperse during biological warfare. The same toxic gas was sprayed over Winnipeg, St. Louis, Fort Wayne, Indiana, and Leesburg, Virginia. Also in 1953, joint army-navy-CIA experiments exposed tens of thousands of people in New York and San Francisco to airborne Serra-tia marcescens and Bacillus glogigii bacteria.

In 1955 the CIA, wishing to test its ability to infect human populations with biological agents, released a bacterium withdrawn from the army’s biological warfare arsenal over Tampa Bay, Florida.

Prior to 1999 and the arrival of West Nile virus in the United States, people worried about the nasty little flying bloodsuckers carrying yellow fever. In 1956 the U.S. military released mosquitoes infected with yellow fever over Savannah, Georgia, and Avon Park, Florida. After each test, army agents posing as public health officials would test infected victims for the range of effects.

As incredible as it may seem, in 1966, army scientists dropped light bulbs filled with the bacteria Bacillus subtilis variant niger onto the ventilation grates of the New York City subway system and exposed more than a million citizens.

The November 1970 issue of Military Review disclosed that the army had intensified its development of “ethnic weapons,” especially designed to target and to eliminate specific ethnic groups who would be susceptible due to genetic differences and variations in DNA.

In 1990 more than 1,500 six-month-old black and Hispanic babies in Los Angeles were given free measles vaccine. The Centers for Disease Control later admitted that the vaccine had never been licensed for use in the United States and that parents were never informed that the vaccine being injected to their children was experimental.

Ken Alibek, a Russian biological weapons expert who defected to the United States in the 1990s, informed U.S. authorities that he thought the West Nile outbreak seemed suspiciously like bio warfare. Other experts in the field of bioterrorism said that terrorists could easily deceive a target people with an outbreak of disease that appeared due to natural causes. Conspiracy theorists agree that if terrorists made a biological plague look like a natural outbreak, the response of the authorities would be delayed and the decision-making process would be slowed.

Many conspiracists are certain that the spraying in the New York City area was a CIA-sponsored event, arranged for propaganda purposes to prepare the public to accept willingly other chemical spraying in the future. While the West Nile virus has truly caused some deaths and illnesses, conspiracy theorists warn against any chemical or biological campaigns being conducted in the name of public health and national security. If any spray is applied, citizens should do it themselves to their own bodies with a recognized brand of insect repellent.

Feedback
Flashcards & Bookmarks ?
Please log in or register to use Flashcards and Bookmarks. You can also log in with
Flashcards ?
My bookmarks ?
+ Add current page to bookmarks
Mentioned in ?
References in periodicals archive ?
The first case of WNV was documented in Uganda in 1937, and the first case report of West Nile virus neuroinvasive disease (WNVND) was traced to an outbreak in Israel in 1951 [4].
The First Case Report of West Nile Virus-Induced Acute Flaccid Quadriplegia in Canada
Despite the small rates of serious health problems, it is still important to avoid West Nile virus.
The Facts You Need To Know About West Nile Virus
In response to an audience question as to why West Nile virus neuroinvasive disease has been on the wane in the United States for most of the past decade, Dr.
Arboviral disease season: it's on!
In 2008, 4,575 mosquito samples throughout Massachusetts were tested for West Nile virus, and 136 samples were positive, according to the Westboro Board of Health.
West Nile virus found; Test on area mosquitoes
Statewide, 27 cases of West Nile virus in people were reported last year, down sharply from the 73 cases in 2006.
County begins testing for West Nile virus
West Nile virus: statistics, surveillance and control data 1999-2006.
Development of a novel, rapid, and sensitive immunochromatographic strip assay specific for West Nile virus (WNV) IgM and testing of its diagnostic accuracy in patients suspected of WNV infection
Although viral loads up to 109 have been reported in dengue virus infection, such levels of viremia are uncommon in arthropodborne viral diseases such as dengue fever and West Nile virus infection (32-34).
Novel Chikungunya virus variant in travelers returning from Indian Ocean islands
In the new study, Murphy and his colleagues worked with researchers in Arizona and Colorado to analyze blood and spinal-fluid samples from 395 people in those states who had been infected with West Nile virus.
Defenses down: mutation boosts West Nile risk
Since 2002, when it was first discovered that West Nile Virus could be transmitted via blood, 30 cases of West Nile Virus that were most likely acquired through blood transfusions have been documented, and 9 of the affected patients have died, according to the FDA.
West Nile virus Assay approved
As with poliomyelitis, numbness is not a feature of acute flaccid paralysis due to West Nile virus, although pain can be present.
West Nile virus season off to slow start, CDC says
West Nile Virus Information from the National Biological Information Infrastructure
Environmental health-'net