[′west‚fȯl ‚bal·əns]
(engineering)
A direct-reading instrument for determining the densities of solids and liquids; a plummet of known mass and volume is immersed in the liquid whose density is to be measured or, alternatively, a sample of the solid whose density is to be measured is immersed in a liquid of known density, and the loss in weight is measured, using a balance with movable weights.
McGraw-Hill Dictionary of Scientific & Technical Terms, 6E, Copyright © 2003 by The McGraw-Hill Companies, Inc.
The following article is from The Great Soviet Encyclopedia (1979). It might be outdated or ideologically biased.

(or Mohr balance), an unequal-arm designed for determining the density of liquids and solids by hydrostatic weighing. (The name “Mohr balance” is derived from the name of the German chemist K. F. Mohr, who invented it in 1847.)

The VG-2 balance, which is a type of beam hydrostatic balance (in Russian called the Mohr-Westphal balance), is shown in Figure 1. To measure the density of liquids, a float is placed in the vessel with the liquid to be determined, and the balance is equalized by adjusting the riders. To determine the density of solids, a double pan is used instead of the float; the lower pan is immersed in distilled water of known density (the density is found using a table for the temperature dependence of the density of water). 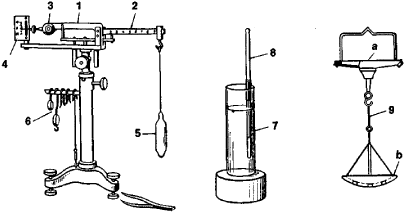 The density of a solid is determined according to the two readings obtained when the solid object is on the upper and lower pans. The limits for measurement of density with a Westphal balance are 0.2 to 2 g/cm3, and the limiting precision is ±0.0005 g/cm3.