A device used to measure the electrical resistance of an unknown resistor by comparing it with a known standard resistance. This method was first described by S. H. Christie in 1833. Since 1843 when Sir Charles Wheatstone called attention to Christie's work, Wheatstone's name has been associated with this network.

The Wheatstone bridge network consists of four resistors RAB, RBC, RCD, and RAD interconnected as shown in the illustration to form the bridge. A detector G, having an internal resistance RG, is connected between the B and D bridge points; and a power supply, having an open-circuit voltage E and internal resistance RB, is connected between the A and C bridge points. See Bridge circuit 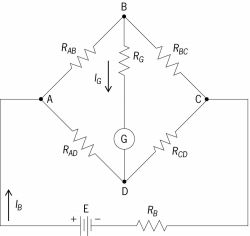 If the network is adjusted so that Eq. (1) is satisfied, the

detector current will be zero and this adjustment will be independent of the supply voltage, the supply resistance, and the detector resistance. Thus, when the bridge is balanced, Eq. (2)
(2)

holds, and, if it is assumed that the unknown resistance is the one in the CD arm of the bridge, then it is given by Eq. (3). (3)

[′wēt‚stōn ′brij]
(electricity)
A four-arm bridge circuit, all arms of which are predominately resistive; used to measure the electrical resistance of an unknown resistor by comparing it with a known standard resistance. Also known as resistance bridge; Wheatstone network.
McGraw-Hill Dictionary of Scientific & Technical Terms, 6E, Copyright © 2003 by The McGraw-Hill Companies, Inc.

Feedback
Flashcards & Bookmarks ?
Please log in or register to use Flashcards and Bookmarks. You can also log in with
Flashcards ?
My bookmarks ?
+ Add current page to bookmarks
Mentioned in ?
References in periodicals archive ?
A comparison of (25a) and (32) shows that the output voltage of the Wheatstone bridge is larger if each resistor has at least 1.4 squares.
An Analytical Theory of Piezoresistive Effects in Hall Plates with Large Contacts
Kreuzer, "Wheatstone bridge circuits shows almost no nonlinearity and sensitivity errors when used for single strain gage measurements", Technical literature of Hottinger Baldwin Messtechnik, [Online].
Comparative evaluation of the two current source supplied strain gauge bridge
Output voltage was at remaining two copper pads as per Wheatstone bridge configuration.
Theoretical and linearity analysis for pressure sensors and communication system development
The deformation is converted into the resistance variation in the gauges of the Wheatstone bridge on the other side.
Intelligent detector of internal combustion engine cylinder pressure and sensitivity temperature coefficient compensation
The Model SDT transducer indicates the level of liquid by continuously measuring hydrostatic pressure via its sensing dement, an ion implanted silicon semiconductor sensor with integral Wheatstone Bridge circuit.
AMETEK, Inc
The first remotely controlled, automatic weighing system installed for rubber compounding took place around 1955, with the weighing equipment consisting of mechanical scale levers connected to dial indicators having potentiometer assemblies mounted on the dial spindles and simple Wheatstone Bridge circuitry activating electro mechanical relays for material feeding control.
Micro weighments of compound ingredients
Truthfully, students don't need to come to Virginia Tech, where I work, to learn Newton's Laws, find out what a Wheatstone bridge is, or how to design a PID controller.
How shall we teach our engineers? The Internet's great for conveying information, but there's more to an education than that
Typically, a bolometer forms one or more legs of a Wheatstone bridge. Langley's device used thin strips of blackened platinum, one exposed to the solar radiation and one that was not.
Adding certainty to measurements adding certainty to measurements