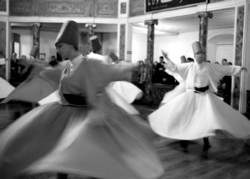 Spinning rapidly in place, these Whirling Dervishes perform in Istanbul, Turkey. Dervishes achieve a higher state of conciousness in this fascinating Sufi tradition practiced by the Mevlevi. Getty Images.

As Western travelers published accounts of the Ottoman Empire in the eighteenth and nineteenth centuries, among the most prominent images were of the Whirling Dervishes. Their ecstatic dance seemed unusual and novel to Western eyes, yet the dervishes contributed an important element to the development of Muslim culture, especially in Turkey, the center of the Ottoman Empire.

Those who did a little research learned that the dervishes were members of a semi-secret Sufi mystical religious community, the Mevlevi, founded by Mevlana Celaleddin (also known as Jelaluddin al-Rumi) in the thirteenth century. Rumi was born in what is now Tajikistan in 1207. His family left their homeland to escape the invading Mongols. Settling in what is present-day Turkey, he followed his father in becoming a scholar. Here he was also introduced to Sufism, the mystical branch of Islam. The key event in Rumi’s life was the death of his teacher. He expressed his grief through poetry, music, anddance. As he continued to write, the major theme of both his poetry and prose was the love of God. His death on December 17, 1273, is commemorated annually by members of the order.

Within the order, the whirling dance, and its accompanying music, is designed to induce a trancelike state in which the love of God becomes personal reality. Music is provided by a flute and various string and percussion instruments. Rumi’s poetry is recited to the music. The chief drummer serves as the ceremonial conductor. The most obvious feature of the dance is the twirling. It is done in a precise manner around an imaginary axis that runs from the head to the stationary left foot. The right hand is lifted upward to receive God’s love, which is transmitted downward through the heart and to the earth via the left arm. The circular movement is prompted by the steady rise and fall of the right foot, which follows the beat of the music. Significant deviation in the method of spinning quickly produces mere dizziness rather than a heightened consciousness.

One of the order’s sheikhs, Jelaluddin Loras (d. 1985), introduced the mystical teachings and practices of the Mevlevi to the West in the 1970s. An initial following was brought together in the Threshold Society, which in the 1990s relocated from Vermont to California. In 1990 the head of the society, Dr. Kabir Edmund Helminski, was the order’s representative in North America. Among the activities of the society has been the sponsoring of events at which visiting members of theorder from Turkey allow the public to see and experience the dervish dance and music. The Mevlevi Order is headed today by a descendant of Rumi, Frank Hemdem Celebi, who succeeded his father in 1996.

Feedback
Flashcards & Bookmarks ?
Please log in or register to use Flashcards and Bookmarks. You can also log in with
Flashcards ?
My bookmarks ?
+ Add current page to bookmarks
Mentioned in ?
References in periodicals archive ?
"We were delighted to see Mahmoud Said's "Whirling Dervishes" sell for a world record $2,546,500," said Jussi PylkkEaAnnen, president of Christie's Middle East and Europe.
'Whirling Dervishes' fetches record SR9.55m at Christie
WOLVES and whirling dervishes will be roaming the streets, a rickshaw will be picking up passengers, a floodlit boxing ring will be hosting theatrical bouts and a Belgian clown is going out of his mind -yes, it''s that time of year again - Stockton International Riverside Festival (SIRF) is coming to town.
SIRF's nearly up - it's that time again
Rumi is also known as the founder of the order of the Whirling Dervishes, in which dancers rapidly spin around and around, believing that their ecstatic trance-producing dance will bring them closer to God and bring peace to the world.
Rumi
The program, "Arabesque: Arts of the Arab World," includes Whirling Dervishes of Aleppo, Caracarra Dance Theatre from Lebanon, Cie La Baraka, Compagnie Thor (right in D'Orient), and Karima Mansour from Egypt, among others.
Arab art
Bursa is also the birthplace of the famous Whirling Dervishes and the museum in that city is amazing.
Letter: Why we should listen to the Turkish people
Her paintings, dominated by Egyptian imagery are filled with characters reminiscent of the Orientalist period, it's almost like a trip down an Arabian memory lane, complete with whirling dervishes and women in various states of repose.
A throwback to oriental paintings
DES BROWNE, the Defence Secretary stuck up the Khyber Pass without a clue, must watch out for the whirling dervishes - of the SNP.
Des-perately stupid
Ataste of the Middle East will be brought to Swansea this weekend as The Whirling Dervishes of Damascus perform their only date in Wales.
Syrian dancers whirl into Wales
Whirling dervishes and musicians from the United States and Turkey will participate Tuesday in a Sema, a sacred ceremony honoring the great Sufi Master Jelaluddin Rumi, at the University of Oregon's Erb Memorial Union.
Sufi celebrants share their culture at the EMU
And we haven't even begun to explore the riches of Sufi Islam, which produced some of the world's most popular poetry along with the prayer-dance of the whirling dervishes.
Al-Salamu 'alaykum: "peace be with you" in any language must be on our lips if it is to heal our world
Dust devils dance like whirling dervishes not far from our camp, driven by rising thermals.
'We hold their experience in our hands and cherish it'
Astronomers have long suspected that the planet-forming disks of gas and dust that surround many newborn stars put the brakes on these whirling dervishes. Now, researchers have the first clear-cut evidence that the young stars' rotations are indeed slowed by their disks.
Braking news: disks slow down stars