single crystals in the form of needles or fibers ranging in diameter from a few nanometers, or tens of angstroms, to several hundred microns. The length-diameter ratio of whiskers is usually greater than 100. Natural fibrous crystals of Au, Ag, Cu, Sn, Pb, S, and various oxides and silicates are known. Natural whisker crystals are often encountered in the form of inclusions within other minerals, for example, rutile needles in natural ruby and quartz crystals.

The first references to the synthetic preparation of whisker crystals date from the 16th century. Particular interest in whisker crystals arose in the 1950’s after the whisker crystals of many substances were found to have extraordinary mechanical properties. Whiskers of more than 140 different elements and compounds have been prepared since then in laboratories in many countries. Whiskers of some high-melting-point compounds—such as silicon carbide, alumina, and silicon nitride— are produced on an industrial scale.

The most important property of whisker crystals is a uniquely high strength, which approaches the theoretical limit that can be estimated from the values of a material’s modulus of elasticity. This strength is several times greater than that of large single crystals and polycrystals (Figure 1). The high strength of whisker crystals is due to the perfection of their structure and to the small number and sometimes complete absence of internal and surface flaws. The number of flaws is much less than in large crystals. One of the most important reasons for the small number of flaws in whiskers is the crystals’ small size and the resulting low probability of the presence of a flaw.

In addition to a high melting point and high strength, whisker crystals of high-melting-point compounds have a high modulus 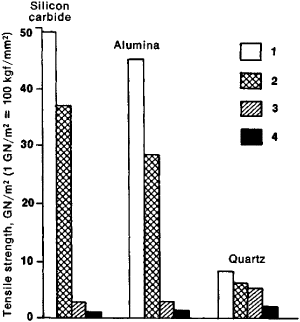 of elasticity and are chemically inert with respect to many metallic, polymeric, and ceramic materials up to extremely high temperatures. Recrystallization processes, which usually cause a sharp decrease in strength at high temperatures, can occur in polycrystalline fibers but not in whiskers.

There are many methods of preparing whisker crystals. Examples are physical vaporization with subsequent condensation, deposition from the gaseous phase by chemical reactions, crystallization from solutions, directed crystallization of eutectic alloys, and growth on porous membranes. Whiskers of high-melting-point metals and compounds usually are obtained by deposition from the vapor phase in high-temperature furnaces with periodic, semicontinuous, or continuous action. Possible schemes for the growth of whisker crystals are illustrated in Figure 2.

Figure 2. Schemes for growth of a whisker crystal from the vapor phase by a dislocation mechanism (a) and by a vapor-liquid-solid mechanism (b)

The most important trends in the use of whisker crystals are the application of their high strength in composite materials and the use of their high thermal stability and resistance to abrasion.

Feedback
Flashcards & Bookmarks ?
Please log in or register to use Flashcards and Bookmarks. You can also log in with
Flashcards ?
My bookmarks ?
+ Add current page to bookmarks
Mentioned in ?
References in periodicals archive ?
Whisker crystals of tin and tin-based alloys are the most common culprits in the short circuiting of electronic components.
Uyemura announces "22,000-hour solution" to tin whiskers formation
Whisker crystals with length to width ratios of 10:1 or 1000:1 are thus created (Henderson and francis, 1989).
ELONGATED TWINS OF SODALITE AND OTHER ISOMETRIC MINERALS
Addition of such materials can, on occasion, cause cubes to continue growth as octahedra, equant cubes to grow as whisker crystals, etc.
Inhibited growth of crystals
The crystals include pyrite "bars" and marcasite blades which are epitactic on early-formed marcasite whisker crystals.
Pyrite and marcasite intergrowths from Northern Illinois