a type of motion picture in which the standard projection screen is replaced with a wider screen having an aspect ratio from 1:1.66 to 1:2.35. The larger screen size, together with stereophonic sound reproduction, considerably expands the graphic possibilities of the art of motion pictures and increases the impact of the motion picture on the viewer (especially in color feature films during outdoor, crowd, and battle scenes). There are several wide-screen systems presently in use, including those with anamorphic compression, those using a cropped frame (the most common), and Techniscope. 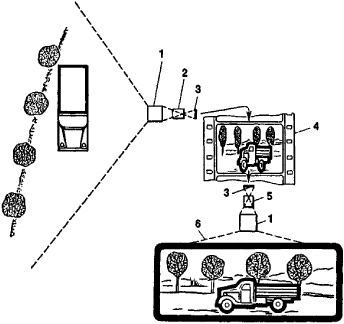 Figure 1. Diagrams of the filming and projection of a motion picture by means of anamorphic optics: (1) anamorphic optics, (2) camera lens, (3) motion-picture film, (4) compressed image on the film, (5) projector lens, (6) ¡mage expanded on a wide screen

Systems using anamorphic optics (first proposed by E. Abbe in 1897) compress the frame during filming of the motion picture and expand it during projection. In 1927 the French scientist H. Chrétien designed the Hypergonar anamorphic lens that approximately doubled the horizontal field of view. The Cinema-Scope system, developed by the US motion-picture company Twentieth Century-Fox Film Corporation under the Chrétien patent, has enjoyed wide use in the USA and other countries. The first motion picture filmed in Cinemascope was The Robe, released in the USA in 1953. In the USSR the first wide-screen feature film, Il’ia Muromets, was released by the Mosfil’m motion-picture studio in 1956. The anamorphic optical system used for modern wide-screen motion pictures compresses the image in the horizontal by a factor of 2:1, which places it within the confines of a somewhat enlarged, four-perforation frame on standard 35-mm motion-picture film. The usable frame area (Figure 1) is thus increased correspondingly.

The use of a cropped frame in the wide-screen systems that gained wide use abroad in the mid-1950’s reduces the height of the standard 35-mm frame to such dimensions that the aspect ratio corresponds to the required aspect ratio of the screen (Figure 2). The frames may be masked in the camera or in the projector. In the latter case the frame is composed during filming so that the most important objects will not be cut off, that is, not masked,

during projection. In order to accomplish this, two lines are marked (as shown by the broken lines in Figure 3) on the ground glass of the camera viewfinder; they permit the cameraman to restrict the height of the frame section containing the most important visual material. This method of viewfinder cropping is most commonly used when filming wide-screen motion pictures for which frame masking will be done during projection. It makes it possible to use a film copy with an aspect ratio of 1:1.37 for television programs, thus eliminating the need for cropping the image above and below by means of a mask. The principal advantage is that the photographic and projection processes are practically unchanged. However, the technique reduces the useful frame area considerably, thereby requiring additional magnification for projection on a wide screen through the use of close-focus optics. Image sharpness is also somewhat degraded, and graininess is increased. Cropping gives satisfactory results for aspect ratios in the range from 1:1.66 to 1:1.85 when high-quality film, high-quality optical projection systems, and high-power light sources are used.

Figure 3. Boundary lines (broken lines) in the viewfinder of a motion-picture camera used in composing for subsequent masking

Techniscope was developed in 1964 by the photographic film company Technicolor Corporation mainly to reduce the costs of producing wide-screen color films. Filming is accomplished with a standard camera equipped with a spherical optical system and a modernized pull-down mechanism that produces a negative frame with a height corresponding to the dimension of two perforations (instead of four as in standard systems). A wide-screen positive copy with anamorphic compression is produced on special equipment by means of optical printing (Figure 4). The system substantially reduces the cost of negative motion-picture film and can provide the film copies required for television programs. However, the resolution is inferior to other wide-screen systems because of the 2:1 reduction in the area of a negative frame compared with the positive obtained by enlargement during optical printing and simultaneous anamorphic compression.

Figure 4. (a) Negative with two perforations per frame as filmed in Techniscope, (b) positive with an aspect ratio of 1:2.35 obtained from the negative

In the USSR the Motion Picture and Photography Institute (NIKFI) and the Mosfil’m motion-picture studio in 1974 jointly developed a wide-screen motion-picture system known as the Universal Frame Format. The system photographs on 35-mm film with a standard optical system and uses the entire area of the frame between perforations. In the printing process, copies can be obtained for practically all formats used in modern theaters—standard 35-mm, 35-mm wide-screen with anamorphic compression, masked 35-mm, 16-mm, and 70-mm (wide-film with stereophonic sound).