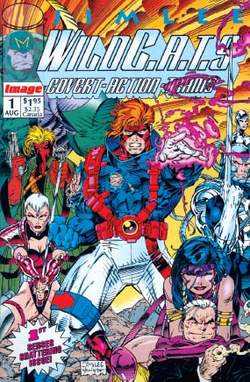 Brought together by the multi-billionaire Lord Emp and the mysterious Void, a group of humans, half-humans, and alien Kherubim warriors protect Earth against the host-possessing aliens known as Daemonites. Emp’s group, WildC.A.T.S, is a Covert Action Team, and its members include Spartan, Zealot, Maul, Voodoo, Grifter, and War-blade. Millennia ago, the warring Kherubim and Daemonites crashed on Earth, and their battle continues to this day. Now, the WildC.A.T.S will end the Daemonite threat or die trying.

Lord Emp (Jacob Marlowe) was a diminutive homeless man until Void helped him learn his true identity as a powerful Kherubim warrior who had lost his way. Becoming rich and founding HALO, Inc. in New York City, Emp worked with Void to gather the WildC.A.T.S team. Void (Adrianna Terishkova) is the silver-skinned manifestation of a dead Russian cosmonaut, combined with the Void essence which traveled back in time both to warn Marlowe about the Kherubim/Daemonite conflict, and to help him assemble the WildC.A.T.S team. Her computer-like mind, teleportation and telekinetic powers, and limited knowledge of future events are invaluable.

Spartan (Hadrian 7) is actually the soul and memories of a dying Kherubim warrior that has been transplanted into the body of a superstrong cyborg by Void and Marlowe. He can fire biomolecular blasts through his hands, and create plasma shields, and his Central Processing Unit can be downloaded into other bodies, making him nearly unkillable. Zealot is a thousand-year-old Kherubin warrior, who is an extraordinarily skilled fighter in the Coda techniques developed by a group of female warriors. She uses her weapons, including the Clef Blade, against the Daemonites.

Maul (Jeremy Stone) is the brilliant son of an archeologist who was really a “Gifted One”/cross-breed: part-human, part-Daemonite. He can grow to immense sizes, but his intelligence and self-control wane the larger he gets. Voodoo (Priscilla Kitaen) is another crossbreed, and was once an exotic dancer. The curvaceous heroine can recognize Daemonites in any form, and can fire mental energies from the focal jewel she wears on her forehead.

Grifter (Cole Cash) is one of the most popular members of the team. With no real superpowers, this ex-con man and intelligence operative has turned his life around as a hero, using his uncanny marksmanship and Coda-trained fighting skills to right wrongs. Green-haired Warblade (Reno Bryce) is a computer-programming crossbreed, who can morph his hands into metal claws or other razor-sharp devices.

In their war against the Daemonites, the WildC.A.T.S have used a warplane known as MIRV (Multi-purpose Intercept/Reconnaissance Vehicle). They have also allied themselves with other heroes, including 1960s hero Mr. Majestic, the tactical response team Black Razors, the StormWatch team, gay techno-whiz Noir, Gen 13, and Zealot’s sister, Savant. Villains they have faced include Coda assassin Artemis; four-armed Daemonite enforcer Karillion; body-stealing Dockwell and the other Daemonites (whose real appearance is somewhat reptilian); shape-changer Mr. White; the sorceress Tapestry; and Lord Hellspont, the flame-headed telekinetic leader of the Daemonites.

In early 1992, a sextet of extremely popular artists left their books at Marvel Comics en masse, and formed their own independent comic book company, Image Comics. One of the most popular of the group was Jim Lee, ex-artist of Alpha Flight, Wolverine, Punisher, and X-Men. He released his first book, WildC.A.T.S in August 1992, providing the art and co-writing with Brandon Choi. Despite plots that were difficult to follow, the series was a success. Fifty issues and an annual were produced by Lee’s Image imprint, WildStorm Productions, before the series was canceled in June 1998; although Lee had quit producing the art, some issues were written by star author Alan Moore, and detailed artist Travis Charest provided a vigorous follow-up for Lee.

The second Wildcats series dropped the acronym and periods in its title, debuting in March 1999, after DC Comics bought the Wild-Storm line. Twenty-eight issues and an annual were published, and the series was again retired in September 2001. A third series, Wildcats Version 3.0, debuted in October 2002. In this latter series, a retired Spartan heads a multinational company called the Halo Corporation, and deals with the power such a group can wield, for evil or good.

WildStorm relaunched the WildC.A.T.S comic in 2006, but only one issue of this fourth volume came out, written by Grant Morrison and drawn by Jim Lee. WildC.A.T.S Volume 5 started in 2008, originally written by Christos Gage, and continued until 2010, when DC Comics announced that it was shutting down the entire WildStorm imprint. However, a number of WildStorm characters have been integrated into DC Comics’ own fictional universe. Among them is WildC.A.T.S member Grifter, who received his own new DC comics series in September 2011, written by Nathan Ed-mondson with art by CAFU. —AM

Feedback
Flashcards & Bookmarks ?
Please log in or register to use Flashcards and Bookmarks. You can also log in with
Flashcards ?
My bookmarks ?
+ Add current page to bookmarks
References in periodicals archive ?
Highlights include his dark take on Green Lantern, the reinvention of Wonder Woman, street cred crowd WildC.A.T.S, and sexy Gen 13.
Heroes all
Encyclopedia browser ?
Full browser ?
CITE
Site: Follow: Share:
Open / Close