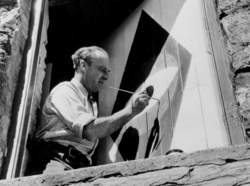 Cecil Hugh Williamson was born into a well-to-do family in Paignton, Devon, on September 18, 1909. His father was a naval officer in the first world war. Since his father was sent to various postings, and his mother followed his father, Cecil was boarded at preparatory schools and spent the holidays with different relatives. While spending a summer with his uncle, the Reverend William Russell Fox, vicar of North Bolly, Williamson had his first encounter with a Witch.

When he was seven, Williamson was mercilessly bullied at Norfolk House School by a boy named Bentham. Bentham would chase Williamson to the point where Williamson had to hide in bushes and hedgerows. One day when he was so hiding, he met an old woman collecting twigs. She taught him how to use a spell to get rid of his tormentor. It worked—Bentham even suffered a skiing accident. This started Williamson's lifelong respect for Hedge Witchcraft. Not long after the hedgerow incident, the young Williamson heard a commotion in the road outside his uncle's home and ran out to discover some drunken farm laborers trying to strip the same old lady. They claimed she was a witch, responsible for a curse on some local cattle, and they were searching for the "devil's teat." Williamson, though only a young boy, threw himself on the old woman to try to protect her. His uncle then came on the scene and the drunks retired. Later that week the old woman met Williamson near a willow tree by a stream. She taught him how to tickle trout and told him more about Witchcraft and magic.

Williamson went on to Malvern College in Worcestershire, spending some summer vacations in Dinard, France, with his grandmother. Williamson's grandmother was an astrologer of note and, through her, he came to meet such people as Aleister Crowley, Margaret Murray, Montague Summers, and Sir Wallace Budge. Immediately after the first world war Williamson's father took a job with the Admiralty and the family lived for a while in a house in Mayfair. There he was introduced, by a fellow college student named Kennedy Cox, to Madame De La Haye, a well-known fortune-teller. Williamson became the fortuneteller's "boy in white," playing the part of a spirit contact at some of her séances.

Williamson claimed that in his lifetime he knew eighty-two Wise Women, or Witches. He said, "I have got to know, over the years, how the simple ordinary wise woman produces her positive visual and beneficial results. To me that is all that matters; everything else is a waste of time and you can keep your world of athamés, chalices, and all the other ritual junk!"

For a while Williamson's parents lived at a place known as Newlands Manor, in the New Forest area. It was a vast house built in the Gothic style, set in a large acreage of woodland complete with a nine-acre lake and a half-mile long driveway from the lodge gate to the house. There Williamson met with Mrs. Woodford Grimes, a leading local Witch, as well as with Dorothy Clutterbuck-Fordham (who was to be Gerald Gardner's High Priestess) and other Witches of that area.

In May of 1930 Williamson started a file on the subject of Witchcraft and continued filling it with his research until his last year alive. The file, which worked much like a journal in many ways, showed that as of June 1997 he had taken part "as a spectator and later as an operative in one thousand one hundred and twenty Witchcraft cases over sixty-seven years." The record also showed, he claimed, that he had known, met with, and been taught various aspects of the Craft by eightytwo wise women. He further claimed that the success rate in this run of 1,120 "incidents," as he called them, worked out to about sixty percent.

Williamson married Gwen Wilcox, niece of British film producer and director Herbert Wilcox, in 1933. Gwen worked in a makeup studio, and Williamson was doing production work. Five years later, due to his growing expertise in the occult, he became a part of MI6, the British intelligence network, and worked on collecting evidence of Nazi occult interests throughout the second world war.

In 1947 Williamson visited the Atlantis Bookshop, near the British Museum. This was—and still is (today run by Caroline Wise)—a favorite place for those interested in the occult. Founded by Michael Houghton, an occultist and publisher who ran a magical lodge known as the Order of the Hidden Masters in its basement, it was not just a book store, but was also a meeting place where one could have a cup of tea or coffee and read, talk, and discuss matters metaphysical. There Williamson met with Dr. Margaret Murray, who in turn introduced him to Gerald Gardner. At the time Gardner was writing High Magic's Aid. Williamson told Murray of a gift of some amulets from Sir Wallis Budge and asked her advice on displaying them in the museum he planned. He wanted to know what he should present that would be of most interest to the public. Murray suggested Egypt of 6,000 BCE but Gardner disagreed and kept pressing for "Celtic mythology, Moon goddesses, and all that sort of thing." Apparently Murray and Gardner had quite a heated argument over it.

It was in 1949 that Williamson opened his first exhibition of Witchcraft at his Witchcraft Research Centre, housed in the old Witches' Mill on Arbory Street, Castletown, Isle of Man. He had wanted to open it in Stratford-upon-Avon, if only because of Shakespeare's three witches in Macbeth, and was offered a building by a doctor he knew there. But when the local press broke the story that it would be be a Witchcraft museum, the locals pressured him out of town, so he moved to the Isle of Man. Shortly after he had opened, Gerald Gardner showed up at the museum and talked Williamson into letting him stay there as the museum's "official Witch," selling copies of his book, High Magic's Aid. He ended up staying with Williamson for twelve weeks before a dispute over Gardner's family money was settled and he was able to purchase a cottage of his own on Malew Street, close to the museum.

Williamson saw Gardner as "very, very vain, very self-centered, very tight with money; and he did not have the gift of diplomacy about when to give a little." This was in sharp contrast to Sir Wallis Budge, of whom Williamson said, "I could not have met a nicer person. . . who had the time to speak to a young fellow. I had the highest regard for him just as I had for Dr. Margaret Murray."

By 1952 Williamson decided to return to England. Gardner bought the Isle of Man property, although he owned only the buildings and not the museum items. Williamson took all his artifacts with him when he left. He went to Windsor and bought a building known as the Old Drill Hall, together with an old public house known as The Goswells. There he reopened his museum of Witchcraft and Magic. After a couple of years there he moved yet again to Boughton on the Water, where Williamson had a number of problems with Christians who called the museum "Satan's House" and tried to drive him out. Local newspaper headlines proclaimed, "Witchcraft Back in the Midlands," "Black Magic Grips Village," and "Witchcraft Exhibit Not Likely to Stay." To add emphasis, a fire burned out a whole section of the museum. The local priest verbally attacked Williamson from the safety of his pulpit and Williamson's housekeeper was refused Holy Communion, even though she was a very religious person.

In addition to the Witchcraft Museum at Bourton, Williamson also opened a Museum of Smuggling in the little Cornish village of Polperro. Finally, in 1960, he retreated from Bourton and reopened in Boscastle along with a Museum of Sorcery in Tintagel, which he did not keep going for long, since it was not a big attraction.

At Boscastle, Williamson was open from April through to September, presenting items once owned and used by people like Aleister Crowley. One of his more unusual exhibits was the mortal remains of Ursula Kemp, the famous Witch of St. Osyth who was executed on February 18, 1582. After her execution, her body was dipped in tar and then put back on the gibbet for twenty-nine days. The parish priest would not give the remains a Christian burial, so she was buried in wasteland. The remains were discovered during excavation for a cottage extension in 1921, just outside the walls of St. Osyth's Priory. Metal spikes were driven through the knees, ankles, and wrists of the skeleton, nailing it to the ground. After being on display for a while, the body was reburied, this time under a load of rubble. It wasn't till the late 1940s that Williamson acquired Ursula Kemp's remains, for the sum of one hundred pounds.

Over the years Williamson was called in to investigate any number of remains, artifacts, and belongings of recently dead magicians and Witches. He once said, "One of the rewards of being the proprietor of a witchcraft museum is that one is always meeting interesting people connected with `the Craft.'" If it hadn't been for him it is possible that Gerald Gardner's museum might not have come into being, certainly not at its Isle of Man site. Williamson did much to promote Witchcraft, especially the "Craft of the Wise"—the wisdom of the Hedge Witch or country wise man and woman.

In 1992 Williamson retired—as much as such an active figure will allow himself to retire—and sold the Boscastle Witchcraft Museum to Graham King and Elizabeth Crow. The museum is still open and very popular.