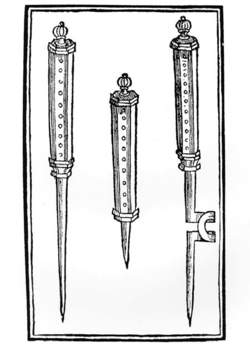 During the persecutions of the sixteenth and seventeenth centuries, an accused witch would be examined for evidence that he or she was a servant of the Devil. One of the recognized signs was an insensitive spot, frequently unmarked, which would not bleed when pricked where, supposedly, the Devil had touched the witch on initiation. To find such a blemish, the examiners would use a bodkin-like instrument known as a "pricker." This would be jabbed repeatedly into the accused's body, searching for the insensitive spot. Nicolas Remy's 1595 work Demonolatry states, "The Devil brands and seals those whom he has newly claimed as his own. . . on that part of the body which was anointed by the priest on the day of their baptism. . . And it is a strange and marvellous fact that they can endure the deepest wound in that part which has been marked by the Demon's talon without feeling any pain." Remy's book played a significant part in the persecutions,

becoming one of the handbooks of the day for witch trial, persecution and punishment.

In Brother Francesco Maria Guazzo's Compendium Maleficarum of 1608, he lists those things which he feels are done when a witch enters into a Pact with the Devil. The tenth item—"He (the Devil) places his mark upon some part or other of their bodies, as fugitive slaves are branded; and this branding is sometimes painful. . . neither does he always mark them upon the same place: for on men it is generally found on the eye-lids, or the arm-pit or lips or shoulder or posterior; whereas on women it is found on the breasts or private parts, as has been observed."

Examiners of accused witches seemed to take delight in searching for this devil's mark with their witch prickers. Some, such as Matthew Hopkins and John Stearne, who sent 220 people to their deaths, were not above using fake prickers to ensure proof of conviction. These "false bodkins" had blades which slid back into hollow handles giving the illusion of the blade entering the body but drawing no blood and producing no pain. Such men were being paid the princely sum of one to three pounds per person convicted.

There were other (visible) spots examined that were also pricked to see if they were insensitive or would not bleed. Virtually any blemish, be it mole, freckle, wart, birthmark, or whatever, was taken as a possible devil's mark and was vigorously pricked. Supernumerary nipples were also sought where the witch was supposed to nurse her familiar imp—her Devil's servant that did her every bidding.

A few modern day Witches will have a tattoo to commemorate this practice of the Middle Ages. They will have it put on their bodies about the time of their initiation (though it is not done as part of the ritual). For some Wiccans the tattoo will take the form of a small animal. Others will have a pentagram, crescent moon, or similar symbol tattooed in an inconspicuous place. Such tattooing is usually an individual preference rather than the requirement of a particular tradition.