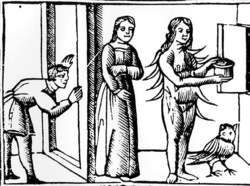 Lucius (who was transformed into an ass shortly after this) witnesses a witch rubbing unguent on her body in order to fly. Courtesy Fortean Picture Library.

Storytelling goes back to the earliest of times, with the stories told incorporating human hopes, fears, beliefs, and memories. The world of fairy tales seems filled with memories of myths and legends, strange and wondrous creatures, fairies and Witches. Many of these characters in more recent fairy tales are descendants of the old Witches from Greek and Roman mythology.

All peoples seem to recognize the role of Witches, or wise men and women, in society and reflect them in their myths, legends, folk tales and fairy stories. Regrettably, available space limits these entries to brief samplings from different sources.

In Greek myth the Witch Medea, or Medeia, was the daughter of Aeëtes, king of Colchis, and was famed for her magical arts. Her skills were inherited from the

god of the sun and greatly increased by her visits to the shrine of Hecate. When Jason came to her country she fell madly in love with him. Using magic she had obtained through Hecate, Medea helped Jason successfully deal with two firebreathing bulls with brazen feet, then further enabled Jason to obtain the golden fleece by sprinkling the eyes of the sleepless dragon with a mystic brew, while under the protection of Hecate. After marrying Jason, Medea returned with him to Greece where she induced the old king Peleus to bathe in her magic cauldron on the pretext that it would cause him to regain his youth. He was boiled alive, leaving Jason heir to the throne. However, the Greeks were so repelled by her actions that the couple were forced to flee Iolcos. When Jason then courted Glauce, Medea presented the princess with a garment which, when worn, caused her to die in great agony. After leaving Jason and murdering their two children, Medea fled Corinth in a vehicle drawn by dragons. In Athens she married Argeus and together they had a son, Medus. Medea was eventually given immortality and became the wife of Achilles in the Isles of the Blest.

The pre-Olympian Greek earth goddess Hecate was associated with night and the moon, ghosts and spirits, magic, Witches and sorcery. She was known as Prytania of the Dead, or the Invincible Queen, goddess of enchantments and magical charms. Hecate seems to have originated in the southwest of Asia Minor and is associated with the crossroads, which is where three roads came together. She was a native of Thrace and resembles Artemis in many ways; at times being merged with her. Hecate was powerful on earth and in the sky and was accompanied by a pack of dogs. The torch is a symbol of Hecate, from her search in Hades with Demeter for Persephone. She became known as the queen of ghosts and mistress of black magic, the keeper of the keys of Hades. Hecate was to antiquity the great goddess of magic, more important than her daughter Circe. Circe was best known for her adventures with Odysseus and for turning his crew into swine. Homer called Circe, "the fair-haired goddess."

Medusa, sometimes referred to as a Witch, was the only mortal of the three Gorgons. Her appearance was so terrible that all who looked on her were turned to stone. Originally she was a beautiful young maiden, however, she desecrated Athena's temple by copulating in it with Poseidon. In revenge, Athena (known to the Romans as Minerva) turned Medusa's hair into snakes. Eventually, Medusa's head was cut off by Perseus, who presented it to Athena. Athena placed it in the center of her aegis, which she wore over her breastplate (the aegis is an awesome protective device associated both with Athena and Zeus). The blood that ran onto the ground when Medusa's head was cut off gave birth to Chrysaor and the horse Pegasus.

No study of children's fairy tales would be complete without mention of the Brothers Grimm. The brothers, Jacob Ludwig Carl Grimm (1785-1863) and Wilhelm Carl Grimm (1786-1859), were collectors and editors of Grimms' Fairy Tales. Jacob was the grammarian and Wilhelm the literary scholar. They were inseparable from childhood through adulthood. After attending public school in Kassel and later studies at Marburg where they obtained law degrees, they developed a great love for literature. They were influenced to start collecting folk material by the

"Heidelberg Romanticists" and, in particular, by Joachim von Arnim and Clemens Brentano. Between 1812 and 1814, the brothers published three volumes of Kinderund Hausmärchen—Grimms' Fairy Tales. Previously, in 1805, they had published a book of folk songs. The fairy tales were as they had collected them, without any embellishment or alteration. In their preface they said, "Our first aim in collecting these stories has been exactness and truth. We have added nothing of our own, have embellished no incident or feature of the story, but have given its substance as we ourselves received it."

In 1830 the Brothers Grimm moved to Göttingen University where Jacob became professor and librarian and Wilhelm under-librarian. Interestingly, in 1835 Jacob and Wilhelm published Deutsche Mythologie, which lauded Germany's past. They presented the Pagan religion of the Germans as an animistic Nature religion with an abundance of spirits, both good and evil, and with gods who had very human characteristics. By 1856, Wilhelm had stated the brothers' theory that the Germanic folk tales were versions of Indo-European myths.

In the collection of fairy tales that make up Grimms' Fairy Tales, there are stories that originally appeared in Latin, tales from the sixteenth century, sagas, riddles, legends, games, rhymes, incantations, and anecdotes that the brothers found to be universal, suggesting that folktales and myths were once one. There is much magic found in the tales with imitative and sympathetic magic, magical formulas, transformations from human to animal or even from plant to mineral and back. Witches are also found, as are magicians and fairies. Most memorable, perhaps, are the Witches who appear in Hansel and Gretel and in Snow White and Sleeping Beauty. In Cinderella there is no Witch or fairy godmother. The magic of giving Cinderella beautiful gowns and shoes is performed by birds, which became a fairy godmother/good Witch in later versions of the story. In Sleeping Beauty, Witches are presented as the "thirteen wise women of the kingdom." (Only twelve are invited to the party because the king has only twelve gold plates!) Again, in later versions, these Witches become "fairy godmothers."

Parts of these stories are edited in modern days. At the end of Snow White, for example, the wicked queen is made to dance in red-hot iron shoes until she drops dead. In Cinderella, the two step-sisters, who are not ugly but no match for Cinderella's beauty, mutilate their feet to try to get the slipper to fit. One cuts off a toe and the other her heel. And in the end (at Cinderella's wedding to the prince), birds peck out the eyes of the sisters.

The Hansel and Gretel story is related to the tales of Russian Baba Yaga or Baba Jaga, analogous to Frau Berchta, or Brechta, of Germany. Baba Yaga was a female witch who lived in a hut in a distant forest beyond a river of fire. The hut stood on chickens' legs and was forever spinning around. It was surrounded by a picket fence topped with human skulls. Baba Yaga liked to steal young children, cook them in her oven and then eat them. She often traveled with Death who provided her with human souls on which she also feasted. She rode through the air in an iron cauldron, conjuring up tempests with her magic wand. She swept away her tracks with a besom. Baba Yaga was a guardian of the fountains of the water of life, and sometimes she is presented in triple form, with two sisters, all of whom are called Baba Yaga. The usual attitude in which she is found is lying on her back in the hut, a foot in each of two corners, her head to the door, and her nose either touching the ceiling or even growing up out of the chimney.

Ozark folklore and legend is replete with tales of Witches. Vance Randolph tells of a man who assured him that, "witches are thicker than seed ticks" in Pulasky county. There, however, a witch is regarded as a woman, "who has had dealings with the Devil and thereby acquired some supernatural powers." The belief is that when a woman decides to become a witch she repairs to the family burial ground at midnight in the dark of the moon. There she swears her body and soul to the Devil, denouncing her Christian faith. She strips off her clothes and gives her body to "the Devil's representative," the one who is initiating her into this "mystery." The rite is witnessed by at least two other initiates, who are also naked, and must be repeated three nights in a row. The neophyte witch is free to turn back at any time until she has completed the third and final rite.

The legends of Ireland include a number of stories of the King of Erin. One long tale tells of his hunt for a black pig, which he follows to an enchanted island. The pig turns into a Witch who bears him a magical child. The Witch is active in "Druidic magic" and works for positive purposes, eventually marrying the king. Many Irish folk tales deal with kings or princes and their encounters with enchantresses and witches.

A Spanish folktale tells of a little girl who watches her grandmother, a Witch, rub flying ointment under her arms and say, "Sin Dios ni Santa Maria, de villa en villa!" ("Without God and without Holy Mary, from town to town!") before flying off out of the window. The little girl gets hold of the ointment and tries to do the same, but mistakenly says, "Con Dios y Santa Maria, de viga en viga!" ("With God and Holy Mary, from beam to beam!") She only succeeds in flying up in the air and repeatedly beating herself against the roof beams. Her grandmother finds her and cures her bruises with Witch remedies, teaching the girl all the Witchcrafts and making her a real Witch. A similar Mexican folktale has a man follow his Witch wife on her visit to her mother where he sees them both say similar words before flying off through the air.

In many Witch legends the Witches appear in threes, quite often as sisters (as in Macbeth). Also, the Witch often first appears in the form of some animal before later changing back to her true form, which may or may not be as a beautiful woman.