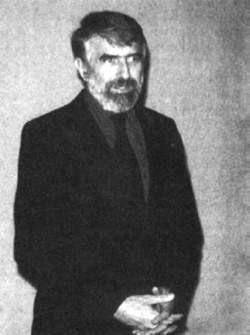 Leonard Wolf, writer and college professor, was born on March 1, 1923, in Vulcan, Romania, the son of Rose Engel and Joseph Ludovic. The family name was changed when they migrated to the United States in 1930. He attended Ohio State University (1941–1943) and then transferred to the University of California at Berkeley, from which he received his bachelor’s degree in 1945 and his master’s in 1950. While at Berkeley, he published his first book, Hamadryad Hunted (1945), a book of poems. In 1954 he completed his doctorate at the University of Iowa. That fall he joined the faculty at St. Mary’s College. He later taught at San Francisco State University for two years and then moved to New York as a professor of English at Columbia University, where he has remained to the present.

Amid Wolf’s varied interests, his Romanian heritage asserted itself in the late 1960s when he created and taught a course on Dracula at Columbia. His experiences with students and his own research in vampire literature and films through the early 1970s led to his writing A Dream of Dracula: In Search of the Living Dead (1972), an impressionistic exploration of the various ways that the Dracula myth had invaded his life. The flavor of the book was aptly illustrated, for example, in his discussion of his attempt to reconcile what he saw as three very different Romanias: the dreamlike one of his childhood memories, the one he traveled through as an adult in preparation for writing his book, and the one of Stoker’s gothic imagination. A Dream of Dracula appeared at a time when nonfiction books on Dracula were rare and found a large audience among a new generation of vampire fans who had been flocking to the vampire movies being produced at that time Wolf made a second significant contribution in 1974 with The Annotated Dracula, a copy of the text of Bram Stoker‘s 1897 novel with extensive notes.

The annotations provided a useful reference to the many actual locations (with handy maps) and the historical facts that Stoker mentioned and offered a variety of information about the folklore to which he referred. Wolf also created a calendar of events in the story, which he believed probably occurred in 1887. (Subsequent research of both historical facts mentioned in the novel and Stoker’s own notes, has revealed the actual date of the novel to be 1893.) After writing his Dracula books, Wolf continued work in the horror field. He wrote a book on Monsters (1974), which included a picture of Christopher Lee on the cover and a chapter on Dracula. He compiled an anthology of horror stories, Wolf’s Complete Book of Terror (1979), and wrote a biographical volume: Bluebeard: The Life and Crimes of Gilles de Rais (1980). Gilles de Rais, while not a vampire, has often been covered in vampire books because of the bloody nature of his crimes. In 1984 Wolf completed a play, The Dracula School for Vampires, which premiered in San Francisco. Wolf’s interest in vampires has continued, and recently he penned an introductory reflection on Bela Lugosi‘s Dracula (1931), on the occasion of the sixtieth anniversary of its release, along with a vampire filmography for an anthology of vampire stories, The Ultimate Dracula (1991).

As the centennial of Dracula approached in 1997, Wolf prepared a new edition of The Annotated Dracula, released as The Essential Dracula, edited a volume of short fiction, and wrote a new volume reflecting his mature opinions on Dracula specifically and vampirism in general. He also organized “The Dracula Centennial: The Esthetics of Fear,” a symposium conference at New York University which featured Joyce Carol Oates, Stephen King, and Stephen Jay Gould.