(named for G. V. Vul’f [Wulff]), a graph of the network of meridians and parallels; a transverse stereographic projection of a hemisphere onto a surface. A Wulff stereographic net provides a graphic solution of many problems in spherical trigonometry, and particularly in spherical astronomy. The ease of utilization of the net is associated with the fact that all great and small circles of a sphere are represented on it in the form of circumferences. Additional graph constructions are usually made on a sheet of transparent paper, which is rotated around the center of the Vul’f grid in various operations. Wulff stereographic nets are also made on transparent paper. The lines on a Wulff stereographic net are drawn at intervals of l°-2°; on larger nets, at intervals of 0.5°.

On a Wulff stereographic net it is easy to draw the arc of a great circle through given points of a sphere and to calculate the angular distance between them; to construct a spherical triangle from any three of its elements and to determine the remaining elements; to shift from one system of spherical coordinates to another; and to determine the moments of rising and setting of celestial bodies and the beginning of twilight; it is also possible to determine whether an artificial earth satellite is being illuminated by the rays of the sun. The visibility conditions for a satellite over the horizon HH of observation station S on two orbits with the positions of the orbital nodes Ω1 and Ω2 are shown in Figure 1. The points with figures are the positions of the satellite at five-minute intervals after passing the node. By rotating the transparency so that point S coincides with pole P, geocentric horizontal coordinates (altitude and azimuth) of the satellite at a given moment are determined from the lines of the net. 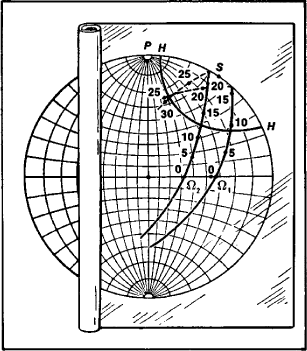