X-Files was a popular television series that ran from 1993 to 2002. Its starting premise was that the FBI has designated a set of cases that had a supernatural, paranormal, or extraterrestrial component for investigation as the unknown or x-files. The FBI assigned special agent Fox Mulder (David Duchovny) to handle the investigations in spite of the belief of many colleagues that he was too much of a believer. His partner was Dana Scully (Gillian Anderson), a skeptical agent, who believed in scientific explanations more than paranormal ones. Over the years they investigated a variety of situations involving everything from UFO abductions to Satanism.

Along the way the duo of investigators encountered a number of vampirelike creatures, such as Virgil Incanto, the villain in “2 Shy” (aired November 3, 1995), described as a fat-sucking vampire. He survived by taking the fatty tissue from his victims. And again in “Avatar” (aired April 26, 1996), they ran up against a succubus. However, along the way, on at least two occasions Mulder and Scully ran into very traditional vampires.

During the second season, in the episode entitled simply “3” (aired November 4, 1994), Mulder reopened the temporarily closed X-files project. The first case to investigate was the death of a Los Angeles businessman attacked in his jacuzzi. He had been drained of blood and fang marks were found on his jugular vein. Mulder tracked a first suspect to the Hollywood Blood Bank, where he found a man dining on human blood. The man, called The Son (Frank Military), was arrested and threatened with direct sunlight unless he talked. Horrified, guards watched him burn to death as the sun hit him.

Mulder then headed for “Club Tepes” where he met Kristen (Perrey Reeves) who recounted how she first met The Son. Before his interrogation was over, Mulder spent the night with Kristen. Most unexpectedly, The Son (and two other vampires known as the Father and the Holy Spirit), appeared at Kristen’s house the next day claiming that he was immortal and was even impervious to sunlight. The three attacked Mulder and Kristen, as a fire that was ravishing the neighborhood approached her home. In the fray, the vampires were finally dispatched.

Early in 1998, a bit of comic relief was provided for the series in the story “Bad Blood” (aired February 22, 1998). Mulder and Scully had been reprimanded for the killing of Ronnie Strickland (Patrick Renna), a teenage pizza delivery boy, whom Mulder was convinced was a vampire. Immediately after the staking, Scully had pulled a set of fake fangs from the boy’s mouth. As Scully recounted the events immediately before the killing, she began with the examination of slides of dead cattle whose carcasses had been drained of blood. Mulder observed that a vacationer from New Jersey had met a similar fate, and also had two small puncture marks on his neck. Arriving in rural Texas, they received the sheriff’s (Luke Wilson) permission to examine the corpse. While Scully did the autopsy, Mulder and the sheriff visited the local graveyard. Scully returned to find Mulder at the motel with news that there was a second body to be autopsied. As she left for the lab, the pizza she ordered arrived, and she sent it to Mulder. At the lab she discovered that both victims had consumed pizza shortly before their death, and quickly returned to the motel. She arrived in time to see Mulder stake the kid.

Mulder added his perspective and a number of details. While Scully was performing the first autopsy, he had accompanied the sheriff to a disturbance at a trailer court where they had discovered the second body. While she was doing the second autopsy, Mulder accepted the pizza, fell into a stupor, and awoke to find Ronnie Strickland in his room. Ronnie had fangs and red eyes. Mulder threw sunflower seeds in front of the young vampire who compulsively stopped and began to pick them up. Scully arrived in time to shoot Ronnie prior to Mulder’s staking him.

The pair’s situation changed dramatically when the coroner pulled the stake from the boy’s body only to discover that he had reanimated. Scully and Mulder flew back to Texas. Here they encountered the vampires at the trailer court, but were both knocked out for the evening. They awoke the next morning to find Ronnie, the sheriff, and the trailer trash no longer in town.

The Vampire Book, Second Edition © 2011 Visible Ink Press®. All rights reserved.
The following article is from Conspiracies and Secret Societies. It is a summary of a conspiracy theory, not a statement of fact. 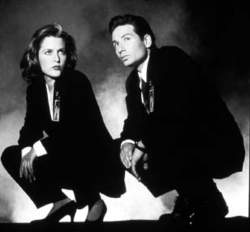 Gillian Anderson and David Duchovney starred in the successful TV series The X-Files.

For conspiracy theorists, UFO buffs, and paranormal enthusiasts, The X-Files was the defining series of the 1990s.

In 1993 Chris Carter, creator of the television series The X-Files for the Fox network, fashioned a blend of UFO mythology, increasing public distrust of the government, and growing interest in the paranormal that over its nine-year run usually finished as the second-most-popular drama (after ER on NBC) among young adults. During its peak season in 1997, The X-Files attracted an estimated 20 million viewers per episode. In 2002, shortly before the last episode of the series, Sandy Grushow, the chairman of Fox Entertainment, said that The X-Files had made in excess of $1 billion for the company.

Certainly, for conspiracy theorists and paranormal enthusiasts, The X-Files was the defining series of the 1990s. Rather than becoming merely a cult hit savored by the political fringe, the series burst free of all restraints and flooded the mainstream audience with its paranoia. FBI agents Fox Mulder (David Duchovny) and Dana Scully (Gillian Anderson) regularly pursued UFOs, alien bounty hunters, and nasty government agents and declared to their audience that “the truth is out there.” However, because the truth was being covered up by an ultrasecret and exceedingly ruthless government agency, they must “trust no one.” And one had but to watch the news channels or read the daily newspaper to witness reallife, high-level cover-ups or to develop a distrust of the government with its high-handed blunders like Iran-Contra, Watergate, Ruby Ridge, and Waco.

According to the mythology developed by Carter for the series, the alien invasion had begun in prehistoric times and had been rediscovered by the U.S. military and a secret branch of the government in 1947 after the crash of a flying saucer at Roswell, New Mexico. Although Mulder and Scully made side excursions to investigate vampires, ghosts, and a wide variety of monsters, the complicated, sometimes downright confusing, UFO mythology was the glue that held the series together and kept the fans returning week after week to chart the agents’ progress in cracking the ultimate case that would force the secret government to admit the truth about aliens.

On June 19, 1998, the X-Files motion picture Fight the Future was released, spreading the small-screen paranoia of the TV series to big-screen multiplexes across the nation. The film topped the box office receipts the first week of its release, grossing $31 million. It has since brought in more than $100 million.

The final two seasons of The X Files saw little of Mulder, who was allegedly hiding somewhere from the secret government, and less involvement from Scully, who seemed to graduate to a kind of advisory capacity. The bulk of the assignments to pursue monsters, restless spirits, and unruly aliens fell to the show’s new costars, Robert Patrick as Agent John Doggett and Annabeth Gish as Agent Monica Reyes.

Before the series ended in May 2002, both Scully and Mulder had themselves been abducted and Scully, earlier declared unable to have children, had borne a child under mysterious circumstances. Although loyal fans of the series were denied witnessing Scully-Mulder nuptials or even a discreet love scene between the two, Scully’s child, William, was obviously Mulder’s by donor sperm or by the extraterrestrials artificially inseminating her with her partner’s seed during one of their abduction episodes. Or Chris Carter just didn’t want to show us everything. The series concluded with the two soul mates escaping from the constant menace of the Cigarette Smoking Man and bounty-hunting aliens to find a new life together.

Often hailed as a cultural phenomenon and generally acclaimed as the most successful science-fiction series in the history of television up to that time, The X-Files exerted an incalculable influence on the mass audience’s beliefs concerning such subjects as UFOs, abductions, and government conspiracies.

Feedback
Flashcards & Bookmarks ?
Please log in or register to use Flashcards and Bookmarks. You can also log in with
Flashcards ?
My bookmarks ?
+ Add current page to bookmarks
Mentioned in ?
References in periodicals archive ?
They made their last on-screen appearance together in a 2008 movie, "The X-Files: I Want to Believe", which received middling-to-positive reviews.
'X-Files' makes its TV comeback, after 13-year absence
He vanished so thoroughly that one might be forgiven for suspecting he'd been abducted by the aliens The X-Files was so obsessed with.
Where were you, Carter?
The plot itself unfolds into something truly sinister, but itAAEs not as gripping as one would expect after having known The X-Files for its brutal mysteries.
The X-files: I want to believe
Reminiscent of Jesus' statement to the rich young man, "No one is good but God." The spiritual lesson here is not the imperative to "trust no one," because often on The X-Files trust is crucial to survival.
Worth noting ...: spiritual lessons from The X-Files. (Culture Watch)
The X-Files definitely moves away from the idea that America is in control of the world, or that the government can be trusted to protect its citizens.
Gilligan vs. Homer Simpson: Pop culture gets globalized
The success of The X-Files in the 1990s would seem to reflect a growing cynicism in the American people about their government--a distrust of their leaders and a new disposition to believe the worst about them, no doubt fueled by the seemingly endless series of political scandals that emanated out of Washington in the 1970s, 1980s, and 1990s.
This is not your father's FBI: the X-Files and the delegitimation of the nation-state. (Culture Watch)
A colleague who knows this recently challenged me with the following: "So, how do you account for The X-Files? It's one of the most subversive shows on television," he said.
IBM and 'The X-Files'
In that spirit, here's a juicy one: I watch "The X-Files" -- Fox's drama about two FBI agents tracking down reports of UFOs and paranormal phenomena -- not because it's sleek, trendy escapism but because it has the potential to redeem our culture.
NCR impulse palpable in 'The X-Files.' (National Catholic Reporter)(Column)
The opening quotation is from Fox Television's The X-Files.]
Scanning the X-files for God pt2
Mulder and Scully try to understand the concept of the Mandela Effect in next week's episode of "The X-Files."
'The X-Files': What Will Happen In Season 11, Episode 4?
Mulder and Scully will be searching for the truth once again starting next year when 'X-Files' returns for an eleventh season.
WATCH: X-Files returns for an 11th season in 2018