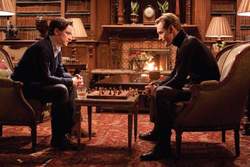 At a point when Professor Charles Xavier, founder of the mutant X-Men, had temporarily left Earth, the group’s original members—Cyclops, Marvel Girl, Angel, Beast, and Iceman—decided to form a new team to carry on his work. The result was one of the first X-Men spinoffs, X-Factor #1 (February 1986), written by Bob Layton and penciled by Jackson “Butch” Guice.

Publicly, the original X-Factor was, purportedly, an organization of non-superpowered humans who hunted down and captured allegedly dangerous mutants. But this was merely the cover story that enabled X-Factor’s founders, who were secretly the original X-Men, to find young mutants who needed their help, give them shelter, and train them on coping with their superhuman powers. The five founders also continued to operate as costumed superheroes, calling themselves the X-Terminators, and battling mutant menaces such as Apocalypse.

Layton and Guice soon left the series and were succeeded by writer Louise Simonson and her husband, artist Walter Simonson. Eventually the five founding members realized that their cover story was actually harming the mutant cause by spreading the notion that all mutants were dangerous. Hence, they publicly revealed the true purpose of X-Factor as an organization to help mutants. Eventually, Professor Xavier returned from his sojourn in outer space, and the five founding members of X-Factor returned to the X-Men.

Writer Peter David and artist Larry Stroman then revamped the X-Factor series, starting with issue 71 (October 1991). The new X-Factor was a team of superpowered mutant operatives working for the United States government. The original members of the new team were Havok (Alex Summers, Cyclops’ brother), who could project energy blasts; Multiple Man (Jamie Madrox), who could create duplicates of himself; Polaris (Lorna Dane), who had magnetic powers; Quicksilver (Pietro Maximoff), who could move at superspeed; Strong Guy (Guido Carosella), who had superstrength; and Wolfsbane (Rahne Sinclair), who could transform into a wolf-like form. Other mutants joined later, including Forge, the Native American with a mutant talent for inventing. Two longtime X-Men enemies, the shapeshifter Mystique and the feral Sabretooth, were also forced to join the team.

The X-Factor series finally came to an end, and was replaced by Mutant X (1998–2001), a comic following Havok’s exploits on a parallel Earth. Marvel also produced a short-lived television series about mutant heroes, also called Mutant X (2001–2004), which had no relation to the comic series.

In 2002, Marvel published a four-issue X-Factor miniseries (Vol. 2) about the U. S. government’s Mutant Civil Rights Task Force, which had no connection to previous versions of X-Factor.

In 2005, Peter David revamped X-Factor, yet again, for the start of Volume 3 of the comics series. This time the series was about X-Factor Investigations, a detective agency founded and headed by Jamie Madrox, the Multiple Man. The original staff consisted of his colleagues from the second X-Factor, Strong Guy and Wolfsbane. Other mutants who have subsequently joined include M (Monet, from Generation X), Rictor (from X-Force), Siryn, who inherited her father Banshee’s sonic powers (from X-Force), Longshot, and Darwin (Armando Munoz), who can adapt to any environment (from X-Men: Deadly Genesis). —PS