a device for studying or monitoring the atomic structure of a specimen by recording on photographic film the pattern obtained when X rays are diffracted by the specimen. X-ray cameras are used in X-ray diffraction analysis. The function of the camera is to ensure that the conditions for X-ray diffraction are satisfied (see bragg-vult condition) and to produce X-ray photographs.

An X-ray tube is used as the radiation source for an X-ray camera. X-ray cameras differ in design according to the purpose of the camera; X-ray cameras of different types are used, for example, to investigate single crystals, to study polycrystal-line powders, to produce small-angle X-ray photographs, and to obtain X-ray topograms. All types of X-ray cameras contain a collimator, a specimen-mounting unit, a cassette containing photographic film, and a mechanism for moving the specimen and, sometimes, the cassette. The collimator forms the working beam of primary radiation and consists of a system of slits, or apertures, that, together with the focus of the X-ray tube, define the beam direction and its divergence—that is, they determine what is called the geometry of the method. Instead of a collimator, a flat or curved crystal monochromator can be mounted at the entrance to the camera. The monochromator selects X-radiation of certain wavelengths in the primary beam; a similar effect can be achieved by using selectively absorbing filters in the camera.

The specimen-mounting unit holds the specimen and gives it an initial position with respect to the primary beam. The unit is also used to center the specimen—that is, to position it on the axis of rotation. In X-ray cameras for investigating single crystals, the unit tilts the specimen on the goniometric head (Figure 1). If the specimen is in plate form, it is secured on aligned 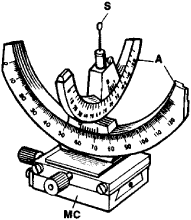 guides; this technique eliminates the need for additional centering of the specimen. In X-ray topography of large single crystal plates, the specimen holder can be moved translationally in

synchronism with the movement of the film while preserving the angular position of the specimen.

The cassette of an X-ray camera is used to impart the necessary shape to the photographic film and to provide light protection. The most widely used cassettes are flat or cylindrical. The cylindrical types are usually coaxial with the axis of rotation of the specimen; in the case of focusing methods, the specimen is placed on the surface of the cylinder. In other X-ray cameras—for example, in X-ray goniometers and in X-ray cameras for X-ray topography—the cassette is moved or rotated synchronously with the motion of the specimen. In X-ray cameras of the integrating type the cassette is also shifted by a small amount during each X-ray photographic cycle. As a result, the diffraction maximum on the photographic film is spread out, the recorded radiation intensity is averaged, and the accuracy of measurement of the intensity is improved.

The specimen and cassette are moved for different purposes. When powder samples are rotated, the number of crystallites reaching a reflecting position is increased, and the resulting diffraction line on the X-ray photograph is uniformly blackened. The movement of a single crystal permits different crystallo-graphic planes to be placed in a reflecting position. In topographical methods, the range of investigation of the specimen is expanded when the specimen is moved. In X-ray cameras where the cassette moves synchronously with the specimen, the mechanism that advances the cassette is connected to the mechanism that moves the specimen.

The X-ray camera permits the structure of a substance to be studied in various situations, for example, under normal conditions, at high or low temperatures, in a high vacuum, in an atmosphere of special composition, or under mechanical stresses and strains. The specimen holder can include devices for producing the necessary temperatures, vacuum, or pressure; it can also have measuring instruments and means for protecting the camera assembly against undesired effects.

X-ray cameras for investigating single crystals differ in design according to their function. For example, one type of camera is used to orient a crystal, that is, to determine the direction of its crystallographic axes (Figure 3,a on page 696) (see also laue pattern). Rotating and oscillating cameras are used for measuring lattice parameters (from a measurement of the diffraction angle of individual reflections or from the position of layer lines) and for determining the type of unit cell (Figure 3,b and 3,c). X-ray cameras for the separate recording of diffraction maxima—that is, the scanning of layer lines—are called photorecording X-ray goniometers. Topographic X-ray cameras are used to investigate imperfections in the lattices of near-perfect crystals. X-ray cameras for single crystals are often equipped with a reflecting goniometer system for the conducting of measurements and the initial mounting of very small crystals.

X-ray cameras that record scattering at small diffraction angles (of the order of a few seconds of arc) near the primary beam are used to investigate amorphous substances, vitreous substances, and solutions. The collimators of such cameras must keep the primary beam from diverging in order that the radiation scattered at small angles by the object in question can be isolated. Various techniques can be employed toward this end; for example, a vacuum can be created, or use can be made of beam convergence or extended ideal crystallographic planes. X-ray cameras for studying objects of the order of a micrometer in size are used with fine-focus X-ray tubes; in this case the distance between the specimen and the photographic film can be greatly reduced, as in microcameras.

X-ray cameras are often named after the inventor of the X-ray photographic technique used.

Feedback
Flashcards & Bookmarks ?
Please log in or register to use Flashcards and Bookmarks. You can also log in with
Flashcards ?
My bookmarks ?
+ Add current page to bookmarks
Mentioned in ?
References in periodicals archive ?
In collaboration with Brookhaven National Laboratory, Sydor will develop and commercialize a transparent X-ray camera to provide scientists with fine details that were not previously available.
Sydor awarded Energy Department contract
It delivers a three-dimensional image created by combining hundreds of scans taken by an X-ray camera spinning around the conveyor belt that enables TSA officers to clearly view the contents of a carry-on bag.
HOBBY STEPS UP TO CT: HOUSTON'S HOBBY AIRPORT HAS INTRODUCED CT EQUIPMENT FOH CABIN BAGGAGE SCREENING
The combination of an X-ray camera with a flexible, optical camera system is said to be the only technology at present that reliably detects contamination on the surface as well as inside of pellets.
Measurement Systems for Large Pipe & Other Extrusions
The X-ray camera on Swift, built by a team from University of Leicester, helped the astronomers discover one of the most&nbsp;luminous white dwarf eruptions ever seen by humans.
Brightest-Ever Nova Found In Small Megellanic Cloud Galaxy
ySTANBUL (CyHAN)- NASA's first wide-field soft X-ray camera, which incorporated a never-before-flown focusing technology when it debuted in late 2012, is a gift that keeps giving.
NASA's first wide-field soft-x-ray camera is a gift that keeps giving
Currently, most patients presenting with angina end up having an angiogram, in which thin plastic tubes are passed from an artery in the wrist to the heart so that dye can be injected down the coronary arteries under an X-ray camera.
Invasive tests on heart could be a thing of the past
Further developments need to be done, for example, to characterize the different materials that are identified by the X-ray camera. This knowledge would be especially useful in order to provide more information to the staff running the production line where contamination might enter into the production process.
Combined x-ray and optical pellet inspection ... for the smallest impurity detection during plastic pellet production & processing
In addition to efficient mechanical cameras, XCAM also developed a new type of X-ray camera that produced better images for terrestrial applications, with smaller pixels at higher resolution.
Cameras designed to capture black holes now used to study tiny viruses
An X-ray camera is used to guide doctors in positioning the catheter in the heart artery where the stent was placed.
Clinical study explores use of stem cells from pelvic bone to restore heart function
For example, digital X-ray camera SCAN300TDI, made by company AJAT Oy [1], placed across the conveyor apron, may collect image lines with resolution 0.1 mm and maximum conveyor speed of 50 cm/s.
Real time image processing for object detection/Vaizdu apdorojimas objektams aptikti realiu laiku
Experts from Aberystwyth University have contributed a sophisticated X-ray camera - due to play an integral part of the maiden voyage.
Welsh are over the Moon with camera on India's mission