Also found in: Dictionary, Medical, Acronyms.
The following article is from The Great Soviet Encyclopedia (1979). It might be outdated or ideologically biased.

The specificity of the interaction of X rays with matter accounts for the difference between X-ray optical systems and optical systems for light waves and electrons. The small deviation of the refractive index of X rays from unity (less than 104) in practice does not allow lenses and prisms to be used for focusing. Electronic and magnetic lenses are also unusable for this purpose, since X rays are inert with respect to electric and magnetic fields. Total external reflection of X rays by curved mirrors or reflection from crystallographic curved surfaces (reflection X-ray microscopy) is therefore used to focus X rays. By virtue of the high penetrating power of X rays, the simplicity of the line structure of the spectrum, and the strong dependence of the absorption coefficient of X-radiation on the atomic number of an element, X-ray microscopy can be carried out by the projection method in a divergent beam of rays emitted by a point source (projection X-ray microscopy). 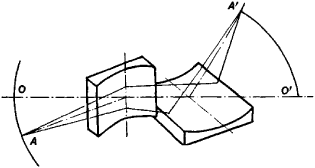 Figure 1. Diagram of the focusing of X rays in a reflection X-ray microscope with two crossed mirrors: (OO’) optical axis of the system, (A) object, (A’) image of the object. The magnification is O’A’/OA.

When curved monocrystals are used to focus the X-radiation, in addition to geometric distortions, the image quality is also affected by structural imperfections in the monocrystals and by the finite value of the Bragg diffraction angles (seeDIFFRACTION OF X RAYS).

Reflection X-ray microscopes have not been widely used because of technical difficulties in their manufacture and operation.

Projection X-ray microscopy is based on the principle of the shadow projection of an object in a divergent X-ray beam emitted by a point source (Figure 2). A projection X-ray microscope consists of a supermicrofocus X-ray source with a focus 0.1–1 micrometer (μm) in diameter (for example, a special microfocus X-ray tube, or a pinhole diaphragm combined with a conventional wide-focus X-ray tube) and a chamber that houses the object under study and the recording device.

The magnification M in projection X-ray microscopy is determined by the ratio of the distances from the point source of the X-radiation to the object (a) and to the detector (b): M

Figure 2. Diagram of a projection X-ray microscope using a wide-focus X-ray tube and a pinhole diaphragm

= b/a (see Figure 3). Consequently, the object must be located at a small distance from the point source. For this purpose the focus of the tube is located directly at the window of the X-ray tube or at the tip of the anode filament located near the tube window. 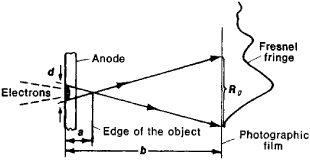 Figure 3. Formation of a penumbra Rg and diffraction fringe in a projection X-ray microscope

The linear resolution of projection X-ray microscopes reaches 0.1–0.5 μm. The geometric resolution is determined by the extent of the blurring (penumbra) Rg of the edge of the object, which depends on the size d of the X-ray source and on the magnification M: Rg = Md. The diffraction resolution depends on the Fresnel diffraction fringe at the edge of the object: Rd = αλ½ where a is the distance from the source to the object. Since a in pratice cannot less than 1 μm, the resolution for λ = 1 Å will be 100 A, provided the dimensions of the source allow such a geometric resolution. Contrast in the image results from the differing absorption of X-radiation in regions of the object having different density or composition. The sensitivity of the projection X-ray microscopy technique is determined by the difference between the X-radiation absorption coefficients for different sections of the object under study.

Projection X-ray microscopy is widely used in medicine, mineralogy, metallography, and other fields of science and technology to investigate the microscopic structure of various objects. The X-ray microscope makes it possible to assess the quality of painting or thin coatings or of the gluing or finishing of miniature products. It makes possible microradiography of biological and botanical sections up to 200 μm thick. It is also used in the analysis of mixtures of powders of light and heavy metals and in the study of the internal structure of objects opaque to light rays and electrons. When this method is used, the specimens under study need not be placed in a vacuum, as with an electron microscope, and they are not subjected to the destructive action of electrons. Various devices for converting X-ray images into visible images in X-ray microscopes, combined with television systems, make it possible to achieve operational control of objects under scientific research and manufacturing conditions.

Feedback
Flashcards & Bookmarks ?
Please log in or register to use Flashcards and Bookmarks. You can also log in with
Flashcards ?
My bookmarks ?
+ Add current page to bookmarks
Mentioned in ?
References in periodicals archive ?
Morphological characterization of unpainted and painted, injection molded plaques was done using transmission electron microscopy (TEM), atomic force microscopy (AFM) and scanning transmission X-ray microscopy (STXM).
Theoretical Analysis and Experimental Characterization of the TPO/Adhesion Promoter/Paint Interface of Painted Thermoplastic Polyolefins (TPO)
The topography station, which was home to the only dedicated monochromatic topography instrument of its kind in the country, also included experimental facilities for hard x-ray microscopy (2) and parallel beam x-ray microradiography.
National Institute of Standards and Technology synchrotron radiation facilities for materials science
An area of rapid development at present is real-space imaging using X-ray microscopy. This holds considerable promise for studies of biological specimens which can provide spatial resolution greater than optical microscopy in an aqueous environment in which the samples are stable.
Synchrotron radiation: a unique, rapidly developing tool for chemical research
Now a group of scientists has takentomography into the microscopic range, developing what they consider a three-dimensional form of X-ray microscopy. The technique is called X-ray microtomography.
X-ray microscopy in 3-D; microtomography resolves micron-sized structures inside solid objects
For two-dimensional x-ray imaging of thin films, the technique of scanning transmission x-ray microscopy (STXM) has achieved imagcs with feature sizes as small as 40 nm in recent years.
Calibration of High-Resolution X-Ray Tomography With Atomic Force Microscopy