the emission and absorption spectra of X rays, that is, of electromagnetic radiation with wavelengths from 104 to 103 angstroms (A). The spectra of X rays produced, for example, in an X-ray tube can be investigated by means of a spectrometer with a crystal analyzer or diffraction grating or by means of an apparatus that does not contain a crystal or grating but consists of a pulse-height analyzer and a detector, such as a scintillation, gas proportional, or semiconductor counter. X-ray photographic film and various ionizing-radiation detectors are used to detect X-ray spectra. 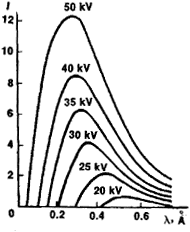 Characteristic spectra are emitted by those atoms of a target for which an electron is removed from one of the inner shells, such as the K-, L-, or M-shell, when a high-energy charged particle or a photon of primary X-radiation collides with the atom. The state of an atom having a vacancy in an inner shell (the initial state) is unstable. An electron from one of the outer shells can fill this vacancy; when it does so, the atom undergoes a transition to a final state of lower energy, where there is a vacancy in an outer shell. The atom can emit the excess energy in the form of a photon of characteristic radiation. Since the energies E1 of the initial state and E2 of the final state of the atom are quantized, a line of the X-ray spectrum of frequency v = (E1—E2)/h results. The radiative quantum transitions of atoms from an initial K-state form the K-series; such transitions produce the hardest X-radiation, that is, the X-radiation with the shor 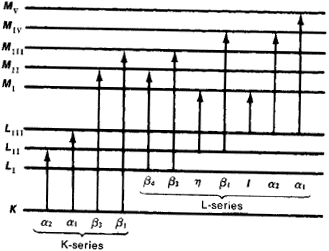 Figure 2. Diagram of the K-level, L-level, and M-level of an atom and of the principal lines of the K-series and the L-series

test wavelengths. The L-series, M-series, and N-series are formed in a similar way (Figure 2). The position of the lines of the characteristic spectrum depends on the atomic number of the element forming the target (seeMOSELEVS LAW).

Each series of characteristic X-ray spectra is excited by bombarding particles having a certain excitation potential V, where q indicates the series being excited. As V increases further, the intensity I of the lines of the spectrum at first increases in proportion to (V - Vq)2 and then slows; when V ≈ 11 νq’ the intensity begins decreasing.

The relative intensities of lines of the same series are determined by the probabilities of the quantum transitions and, consequently, by the corresponding selection rules. The brightest lines are those of electric dipole radiation. Weak lines of electric quadrupole, electric octupole, magnetic dipole, and magnetic quadrupole radiation can also be detected in characteristic spectra.

Feedback
Flashcards & Bookmarks ?
Please log in or register to use Flashcards and Bookmarks. You can also log in with
Flashcards ?
My bookmarks ?
+ Add current page to bookmarks
Mentioned in ?
References in periodicals archive ?
Specifically, in the energy-dispersive X-ray spectra, calcium was detected both in the smooth areas of the sample and in the areas with CaC[O.sub.3] particles (Figures 4(c) and 4(d)).
CaC[O.sub.3]-Polymer Nanocomposite Prepared with Supercritical C[O.sub.2]
The inset shows X-ray spectra. The evaluated photon intensity obtained from (A): synchrotron radiation at BL8S1 of Aichi SRC, (B): Pt mirror (incident angle: 0.2[degrees]), (C): 400 [micro]m thick Be film, (D): 500 [micro]m thick Al film, (E): metallic solution through air (1 m distance), and (F): 180 [micro]m thick steel used stainless (SUS) mask.
One-Step Synthesis of Copper and Cupric Oxide Particles from the Liquid Phase by X-Ray Radiolysis Using Synchrotron Radiation
(1995) Observational study of X-ray spectra of binary pulsars with Ginga.
X-ray studies of neutron stars and their magnetic fields
Desponds, 1997 Catalogue of diagnostic X-ray spectra and other data IPEM Report 78 (York: Institute of Physics and Engineering in Medicine).
The metrology of a rastered spot of X rays used in security screening
As can be seen from Figures 2 and 3, there are some differences in the intensity of generated X-ray spectra in the range of energies up to approximately 50 keV for the different types of conical anodes, which showed different apex angle values.
Monte Carlo simulations of a scanning system based on a panoramic x-ray tube with a conical anode
Chandra's X-ray spectra showed clear signatures of a pair of supermassive black holes.
NASA's Chandra identify nearest pair of super massive black holes
Beam hardening (loss of low energy photons in X-ray spectra) and dynamic range (here 12 bit) limit accuracy of X-ray computer tomography in these cases.
X-Ray computer tomography in end-of-life investigations of HID lamps
They added two x-ray spectra to gain a static image of the coronary arteries and the heart muscle.
Single CT scan could diagnose heart disease
X-ray spectra of high temperature treated carbon fibers were also reported and showed another peak at about 44 2[theta], in addition to the peak at 26 2[theta] [17].
Preparation and characterization of bis-ortho-diynylarene (BODA)-derived submicrogratings
Various diagnostic instruments measured the X-ray spectra and radiation temperatures inside the hohlraum, and imaged the X-rays that were sufficiently energetic to exit through the hohlraum wall.
NIF ignition projections validated
The most frequently used methods of data interpretation are spectral comparison by simple overlaying of X-ray spectra of two fragments or by calculating the element intensity ratios.
Elemental analysis of glass: Scientific Working Group for Materials Analysis (SWGMAT)