Figure 1. Schematic of the obtaining of a topogram of a crystal by the Schultz reflection method; a beam of continuous-spectrum X rays diverging from a “point” focus (25 μηι in diameter) is incident on the crystal at angles from θ to θ ‘that satisfy the Laue condition for wavelengths from λ to λ’, and the reflected beam yields a diffraction image of the crystal on photographic film

The physical basis for the methods of X-ray topography is the diffraction contrast in the image of different regions of the crystal within a single diffraction spot. This contrast is formed as a result of the differences in the intensities or directions of the rays from different points of the crystal in accordance with the perfection or orientation of the crystal lattice at these points. The effect produced by the change in the path of the rays permits estimates to be made of the dimensions and misorientation of crystal substructure elements, such as fragments and mosaic blocks. The difference in the intensities of beams is used to find stacking faults, dislocations, segregations of impurities, and stresses. 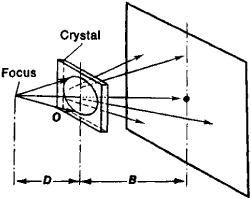 Figure 2. Schematic of the obtaining of a topogram of a crystal by the Fujiwara transmission method; a beam of continuous-spectrum X rays diverging from a “point” source forms an image of a thin crystal when it passes through the crystal. The thickness of the crystal is t ≥1/μ, where μ is the linear absorption coefficient for X rays. The magnification is B/D.

Figure 3. Schematic of the obtaining of a topogram of a crystal by the Berg-Barrett reflection method; a parallel beam of monochromatic X-radiation from a line source is incident on the surface of the crystal at the Bragg angle, and the diffraction image is recorded on photographic film located near the crystal and parallel to the crystal’s surface

X-ray topography differs from other X-ray techniques for investigating crystals in its high resolving power and sensitivity. In addition, X-ray topography permits the investigation of the three-dimensional distribution of defects in comparatively large near-perfect crystals having dimensions of up to tens of centimeters.

The linear resolution of many methods of X-ray topography ranges from 20 micrometers (μm) to 1 μm, and the angular resolution from 1’ to 0.01”. The sensitivity is determined by the contrast in the intensities of the diffracted rays from correctly and incorrectly oriented crystal regions and from perfect and distorted regions. 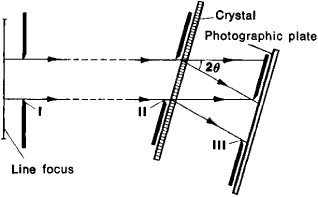 The methods of X-ray topography differ in the following respects: range of diffraction angles used; character of defects found, which can be macroscopic defects or lattice defects; de-

Figure 5. Schematic of the obtaining of a topogram of a crystal by the Lang transmission method through the use of a narrow parallel beam. Monochromatic X rays from a “point” source are singled out by a narrow slit (0.1 mm in width) so that only Kα1 radiation is incident on the crystal. The diffraction image is isolated by a second slit and recorded on a photographic plate. The greater the distance A and the smaller the width S of the slit, the greater the mono-chromaticity of the radiation. For large crystals, synchronous back-and-forth motion of tire crystal and the photographic plate is necessary; the slits remain stationary during this motion.

gree of imperfection and defectiveness of the crystals; sensitivity; and resolving power. Schematic diagrams of certain methods of X-ray topography are presented in Figures 1–5. The conversion of X-ray images into visible images and the presentation of the images on a television screen permit the defects of crystals to be monitored when the crystals undergo various kinds of treatment during industrial processing or during the investigation of their properties.