Also found in: Dictionary, Thesaurus, Wikipedia.
The following article is from The Great Soviet Encyclopedia (1979). It might be outdated or ideologically biased.

(in Russian, “volnovoi kanal,” or antenna Uda-Iagi), also called a director antenna; a traveling-wave antenna in the form of a series of parallel, linear electrical dipoles, each close to 0.5 wavelengths long, mounted in the same plane along a line coinciding with the direction of maximum radiation or reception. The active dipole in this antenna (see Figure 1) supplies the energy of high-frequency oscillations; electrical currents are induced (excited) in the passive di-poles by the spatial electromagnetic coupling between them and the active dipole. The phase of the currents in the reflector and the directors, which is controlled by adjusting their lengths, is established so that a traveling wave is formed along the antenna, moving from the reflector to the directors. To tune the antenna, the directors are shortened by 4-10 percent, and the reflector is lengthened by 5-10 percent compared with the active dipole, whose length is somewhat less than 0.5 wavelengths; the separation between dipoles is usually 0.1-0.3 of the operating wavelength. The front-to-rear factor of such antennas increases with the number of passive dipoles, reaching 20-30. Yagis are used for transmitting and receiving, mainly in the metric wave band, particularly for the reception of television programs. 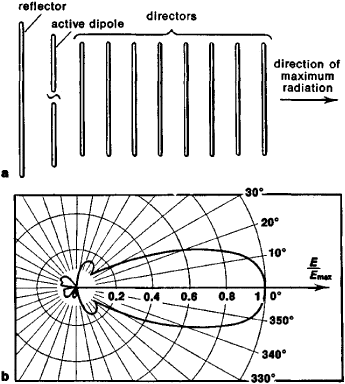