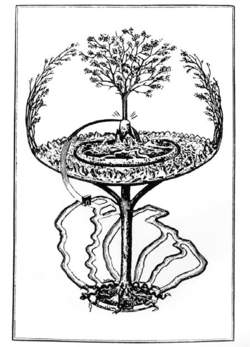 In Scandinavian mythology, Yggdrasil or Igdrasil, is the world tree, an evergreen that overshadows the whole world. The name may come from Yggr, which was one of the many names by which Odin was known. Yggdrasil is the guardian tree of the gods. Heaven and hell are bound together by its roots and branches, and the gods meet daily beneath its branches to sit in judgement. It is said to actually link together nine worlds, including those of the giants, the gods, and the dead.

Odin was the god of death and battle. He was the Wodan of the Germans and the Woden of the Anglo-Saxons. He was believed to welcome into his halls those warriors who died a heroic death on the battlefield. Mythology says that Odin hung from the World Tree for nine days and nights while pierced with a spear. He fasted as he hung there as a sacrifice. Afterwards he was able to bend down and lift up the magical runes which brought secret knowledge to men.

Vithofnir, a golden rooster, sits on top of the tree, and an eagle sits on the highest branch with a falcon perched on its head. That branch shades Valhalla. The eagle and the falcon report all that they see to the gods who meet below. Gnawing at the roots of the tree is the serpent, Nidhoggr, the World Serpent. A squirrel named Ratatosk runs back and forth between the serpent and the eagle, trying to stir up discord between the two.

Four stags, Dain, Duneyr, Durathor, and Dvalin, feed on the upper twigs of the tree while their antlers drop dew on the world below. Odin's goat, Heidrun, the supplier of milk for the heavenly mead, browses on the tree branch known as Lerad.

Feedback
Flashcards & Bookmarks ?
Please log in or register to use Flashcards and Bookmarks. You can also log in with
Flashcards ?
My bookmarks ?
+ Add current page to bookmarks
Mentioned in ?
References in periodicals archive ?
"By joining the Yggdrasil Masters program we have a great opportunity to make our games even better and to expand our reach among the best operators in Europe.
Yggdrasil signs new studio partnership; Yggdrasil, one the world's leading innovative software providers, has announced Fantasma Games as its third studio partnership, which will see them joining the YGS Masters Program
Like Yggdrasil, (6) the cross of Christ frames the whole of
Practice of being rooted in the Gospel
The seller is Urdar AB, a fully owned subsidiary of Yggdrasil AB, which is 100%-owned by Swedish businessman Erik Penser.
Finnish Evli Bank to acquire Swedish Erik Penser Fonder
"Thor's Oak" of Scandinavian mythology and "Yggdrasil", the "Tree of Life", of the early Germanic tribes closely resemble the modern Christmas tree.
Christmas festivities take on different hues
Something is amiss in the land of Yggdrasil. Monsters spawn in unlikely places, and the nature of reality is becoming undone.
Mutsuki, Lay. Yggdrasil
From the serpent of Apep that attacked the sun god Ra every night according to Egyptian lore, to the Norse dragon Nidhoggr that gnawed at the roots of the great tree Yggdrasil, to East Asian dragons that regulated the weather, Imagine a Dragon spans the gamut of multicultural dragon lore.
Imagine a Dragon
Such are the tales of Prometheus, of the Under-World of the Zuni, the Midgard and Yggdrasil stories of the North....
Chapter 8: the con/text of Mary Sheldon Barnes (1850-1898): a hermeneutic inquiry
"Critical Hour: Three Mile Island, The Nuclear Legacy, and National Security." (Yggdrasil Institute, 2006) http://www.earthhealing.info/CH.pdf (December 30, 2006).
Distrust and the nuclear doctrine
Highlights include the fabled Yggdrasil tree sculpture in Coppergate Square, where children can design their own personal offerings to the gods and hang them from the tree's branches and a marquee where crafts can be sampled.
TRAVEL: HELP! It's half term again .. so what shall we do with the kids?
It continues thereafter to include Six Exhibits (529-535), three Appendices (537-662), an Index (663-705), Credits (707-708) and Yggdrasil (709).
Return to the beginning: House of Leaves by Mark Danielewski
The gods lived in the center of the world in Asgard, around the tree Yggdrasil with humans surrounding them in Midgard; giants lived in Utgard around the outer edges.
Set design as cosmic metaphor: religious seeing and theatre space