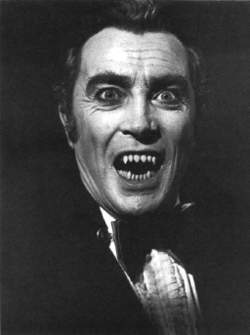 mong the several new vampire characters to appear in the 1970s was Count Yorga, the subject of two films released by American International Pictures. The idea for Count Yorga grew out of the collaboration in the late 1960s of director Bob Kelljan and independent producer Michael Macready. The two had made some money on a joint low-budget, soft-core pornographic film, and Kelljan had the idea of doing a second porno film with a vampire theme. At this point, actor Robert Quarry (1925–2009), a friend of Kelljan, got involved. Quarry suggested that they produce a straight horror movie and offered to play the lead role.

Quarry had entered the world of films at the age of 14 when he got a job as a bellhop on Alfred Hitchcock’s Shadow of a Doubt, which was shot in Santa Rosa, California. Hitchcock took a liking to him and gave him several lines in the movie, though they were cut from the finished product. He went on to play a variety of bit parts in the movies and appeared on radio and television. As his career proceeded, he became typecast as a “heavy.” The Loves of Count Yorga, as the first of the Yorga films was originally named, became his first starring role.

Quarry’s vampire drew upon both the suave Dracula of Bela Lugosi and the more dynamic and vicious portrayal by Christopher Lee. The story was set in Los Angeles in the late 1960s. Yorga moved into an old mansion and emerged as a spiritualist medium. His first victim was Erica, a young woman who had attended the first séance and who was vampirized as she tried to leave the mansion. Her car had become stuck in the mud. A friend, Dr. Hayes, though ignorant of vampires, researched the subject after Erica was discovered sucking the blood from a cat. After a second young woman was attacked, he concluded that a vampire was operating in Los Angeles. Hayes and Michael, Erica’s boyfriend, went to the mansion after Yorga and eventually dispatched the vampire by means of a broomstick through his heart. The first film was an enormous success. Made for $64,000, it grossed several millions, the most successful American International film to that time. Quarry became a horror film star. A sequel called The Return of Count Yorga was quickly planned and just as quickly made. In the sequel, a revived Yorga attended a masquerade party where he met and fell in love with Cynthia (played by Mariette Hartley).

He decided to possess her, in spite of her engaged status. In a scene reminiscent of the Charles Manson slayings, Yorga sent a group of female vampires he had created to gorge themselves on the members of Cynthia’s household. Yorga confessed his love to Cynthia and invited her into his vampiric life. She rebuffed him. Meanwhile, her fiancé convinced the police to go to Yorga’s home. They were met by his vampire harem and, while a fight ensued, the fiancé went in search of Yorga. Yorga died from a knife in the heart; but, in a twist ending, the fiancé had by this time become a vampire himself. The film ended as he turned and bit into the neck of his beloved Cynthia.

American Universal planned to do a third Yorga film, but eventually dropped the idea, in part because it was engaged in promoting its Black exploitation Blacula films. Quarry continued his acting career in various nonvampire roles.