yucca (yŭkˈə), any plant of the genus Yucca, stiff-leaved stemless or treelike succulents of the family Liliaceae (lily family), native chiefly to the tablelands of Mexico and the American Southwest but found also in the E United States and the West Indies. Yuccas in flower produce a large stalk of white or purplish blossoms. They are pollinated by yucca moths, and in its absence they rarely fruit—a striking example of interdependence, since the moth, which lays its eggs during pollination and whose larvae feed on some of the developing seeds, cannot reproduce without the yucca. The leaves are usually stiff and spearlike, often with marginal threads. Several species are known as Adam's-needle, particularly those that are hardy and are cultivated in the North, most common of which is Y. filamentosa. The Joshua tree (Y. brevifolia) is a picturesque treelike species of desert regions. Mormons crossing the California deserts are said to have so named it because the grotesquely angular branches looked like the outstretched arms of a Joshua leading them out of the wilderness. The Spanish bayonet (Y. aloifolia) is another that is treelike in form, and the Spanish dagger (Y. gloriosa) is stemless or has a short trunk. The fruits and sometimes the flowers of several species of yucca were used as food by Native Americans. Certain species, particularly Y. baccata and Y. glauca, are called soap plant because of the use of their roots for soap. The fibers of some kinds have been utilized. A yucca is the state flower of New Mexico. Yuccas are classified in the division Magnoliophyta, class Liliopsida, order Liliales, family Liliaceae.
The Columbia Electronic Encyclopedia™ Copyright © 2022, Columbia University Press. Licensed from Columbia University Press. All rights reserved. 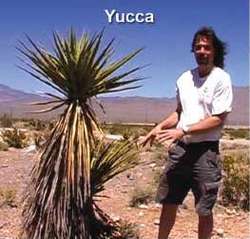 Very pointy sharp spiky leaves, white flower stalk. Inner stem (aerial root) & root is what you want. Source of sterols and saponins. Sterols bind cholesterol, help formation of hormones through adrenal glands. High in resveratrol- a very strong anti-aging anti-tumor phytoestogen that counters a lot of the stronger estrogens which can accelerate the growth of cancer cells. (plastic for example is an estrogenic compound) Saponins are natural steroidal anti-inflammatory- great for ulcerative colitis, gastritis, any type of intestinal inflammation, arthritis, asthma and some allergies. It's a soap molecule- indians used it to wash hair and stimulate hair growth by using it as shampoo and soap. Flowers are edible. Do not eat the spiky leaves, their juice was used by indians to make poison arrows. Inner stem and root is anti-inflammatory, assists in absorption of nutrients. Supports the growth of beneficial intestinal flora. Extracts have bee used for tumors and melanoma. Make steam bath with root for broken bones and sprains. Yucca root- Grind up inner white powdery stem, make a tea out of it. Also very beneficial to soil… grind up and add to soil. Because it holds moisture like a sponge, this stuff makes a great mulch in the garden, because it's high in plant sterols, it helps other plants adapt to stresses of life, extreme temperatures etc (high heat in desert, wind) The flowers, buds and fruit are edible. Tastes better when steamed. Root saponins are toxic to small animals. Helps establish a correct balance of intestinal flora (probiotics) in the gut and colon. Yucca is also somewhat of a laxative. Flower stalks are commonly roasted and eaten like sugarcane or peeled, boiled and eaten like asparagus. Yucca fruit is a bittersweet mass of juicy flesh that can be eaten raw or cooked.
Edible Plant Guide © 2012 Markus Rothkranz
The following article is from The Great Soviet Encyclopedia (1979). It might be outdated or ideologically biased.

a genus of tree-like evergreen plants of the family Agavaceae. The stems sometimes reach a height of 12 m; they are capable of secondary thickening, reaching a diameter of 30 cm. The sword-shaped, tough leaves are frequently greater than 1 m long; they form a ring around the stem or a basal rosette. The campanulate flowers are in groups of as many as 300 in large pyramidal terminal panicles measuring 0.2–5 m high. Pollination is by moths of the genus Pronuda. The fruit is a dry capsule, or it is succulent and indehiscent. In some species the fruit is edible.

There are about 40 species, distributed primarily in arid regions of Central America and southern North America. The leaves of the Adam’s needle (Y. filamentosa), the Spanish dagger (Y. gloriosa), and other species yield fiber used for making bagging, rope, and basketry. Yuccas are cultivated as ornamentals in the USSR (the Crimea and the Caucasus).

any of several plants of the genus Yucca, of tropical and subtropical America, having stiff lancelike leaves and spikes of white flowers: family Agaraceae

Feedback
Flashcards & Bookmarks ?
Please log in or register to use Flashcards and Bookmarks. You can also log in with
Flashcards ?
My bookmarks ?
+ Add current page to bookmarks
Mentioned in ?
References in periodicals archive ?
Cutting yucca after its days of gloriosa 6 I have a Yucca gloriosa, but I don't know what to do with it once it has finished flowering.
Ask Carol..
The giant of the race is Yucca gloriosa. It makes magnificent rosettes of dense spiky foliage which look dramatic and stylish all year round.
When the growing gets tough; Can the horticultural thugs have some sweet relatives that you would allow in yourpatch?
Yucca gloriosa will produce exotic-looking flowers after five years or so and makes a fine focal point to a border.
Plant yuccas for a dramatic point; TRICKS of the TRADE
Yucca gloriosa will produce exotic looking flowers after five years or so.
TRICKS OF THE TRADE