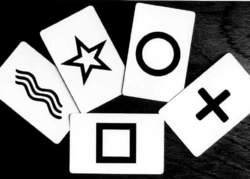 Zener cards are a deck of twenty-five cards designed in the 1930s by Dr. Karl E. Zener, an associate of Dr. Joseph Banks Rhine. They are used in testing for extrasensory perception and are sometimes referred to simply as “ESP cards.” The deck includes five each of five different designs: a circle, a cross, three wavy lines, a square, and a star.

The procedure as originally used by Rhine was to have a subject guess the sequence of the symbols in the deck, after it had been well shuffled to ensure a random order. The expected average of correct guesses was five. This is known as the “mean chance expectation,” or MCE. The point of the experiment is to see if the subject can guess significantly higher, or significantly lower, than the MCE.

Feedback
Flashcards & Bookmarks ?
Please log in or register to use Flashcards and Bookmarks. You can also log in with
Flashcards ?
My bookmarks ?
+ Add current page to bookmarks
Mentioned in ?
References in periodicals archive ?
The book divides its "thought-experiments" into sections based on shapes from an extrasensory perception test known as Zener cards. The circle is "Concerned with consciousness, enclosed spaces, negation"; the plus sign with beauty, sadness, sleep; the square with haunting, the afterlife, being a ghost; and the star with interpersonal communication, empty spaces, the future.
STOMATA
For the three-number lock, Zener cards (used in laboratories to test for psychic abilities) were shuffled and distributed on tables throughout the room.
Escape Rooms: Harry Potter Night and Kidnapped!
He said Mitchell transmitted the symbols in the Zener cards that were used by Dr.
Everyone has telepathic abilities
Feather still remembers Leila, a first grader, who correctly identified 24 out of 25 Zener cards, a display of ESP she has never seen before or since.
Men and Women Of Parapsychology, Personal Reflections: Esprit Volume 2
Rhine was interested in whether or not a receiver could discern the face of special cards known as Zener cards when a person (sender) drew one at random from a well shuffled stack.
Parasomnias or paranormal--things that go clunk in the night
When I asked what the message was, Jonsson told me it contained the five symbols of the Zener Cards used by Dr.
The astronaut who believed in ETs, UFOs and ESP
The basic question underlying the present study is whether the psychodynamic lawfulness observed in spontaneous cases could be used to predict response patterns of traumatically sensitized individuals in a restricted-choice ESP task, in which emotionally charged targets (12 different pictures) are randomly dispersed among 100 (neutral) Zener cards in an open deck.
Subjects were told that they had to guess the sequence of symbols top-down in an open deck of 100 Zener cards. This had to be done four times.
Anticipatory awareness of emotionally charged targets by individuals with histories of emotional trauma
Rhine's Zener cards declined during the 1990s but became a focus of skeptical comments in the 2002 sample.
The coverage of parapsychology in introductory psychology textbooks: 1990-2002
Twelve participants were asked to guess the top-down sequence of symbols in an open deck of 100 Zener cards. These "cards" were represented by 100 random numbers from 1 to 5, which had been generated by a pseudo-random number generator (RNG) some days before.
Anticipatory awareness of emotionally charged targets by individuals who went through shocking experiences
Experiment 1: Long-Distance Guessing of Zener Cards
Signal processing analysis of forced-choice ESP data: evidence for psi as a wave of correlation
Although an early publisher of one set of Zener cards did use inadequate material, this deck was not used in Rhine's research program.) The authors critically discuss Schmeidler's "sheep-goat effect" but fail to review meta-analyses pertaining to this hypothesis (p.
How to Think About Weird Things: Critical Thinking For A New Age