1. a member of a tall Negroid people of SE Africa, living chiefly in South Africa, who became dominant during the 19th century due to a warrior-clan system organized by the powerful leader, Shaka
2. the language of this people, belonging to the Bantu group of the Niger-Congo family, closely related to Swazi and Xhosa
Collins Discovery Encyclopedia, 1st edition © HarperCollins Publishers 2005
The following article is from The Great Soviet Encyclopedia (1979). It might be outdated or ideologically biased.

(Amazulu), a people living mainly in Natal Province of the Republic of South Africa, where they constitute the majority of the African population. Their total population is approximately 3.8 million (1970, estimate). They speak the Zulu language. Most Zulus worship the powers of nature and their ancestors; some belong to a syncretistic Christian-African religious group known as the Nazareth Baptist Sect.

In the early 19th century, in view of the threat of Anglo-Boer conquest, the Zulu tribes formed a common alliance under the leadership of the Zulu chieftain Shaka (and after him Dingaan). The Zulus created an army that resisted the conquerors. However, the English managed to defeat the Zulu army in 1879. Three-quarters of their lands were taken from them, and in 1887 the remaining territory became part of the colony of Natal under the name of Zululand. The Zulus’ last major rebellion in the struggle for independence occurred in 1906.

The chief occupations of the Zulu are farming and cattle raising, although some work as hired laborers on the farms, ranches, and plantations of Europeans and as workers in mines and industrial enterprises.

(Isizulu), the language of the Zulu (Amazulu); spoken in areas of the Transvaal, in Natal Province in the Republic of South Africa, by approximately 3.8 million people (1970, estimate). The main dialects are Kwabe, Lala, Ndebele, and Ngoni.

According to the classification of C. M. Doke (South Africa), Zulu belongs to the Nguni group of the southeastern Bantu language zone. The phonetic structure of Zulu is complicated by the presence of predental lateral fricatives, such as the voiceless [hi] and voiced [dl]; also reported for Zulu, because of the Hottentot-Bushmen substrate, are the dental [c], alveolar [q], and lateral [x] click sounds, each of which has aspirated and nasalized variants. Consonant and vowel alternation laws operate on the morphophonological level: under specific phonetic conditions, labial consonants become predental consonants at morpheme boundaries, and vowel contact is accompanied by fusion or prolapsus. There is vowel harmony in the verb system. In grammatical structure, Zulu has a system of class agreement (13 classes), but spatial relations are indicated by a locative form with the confix e-…-ini. Syntax is characterized by direct word order: subject-predicate-object. There is subject and object agreement of the predicate. Zulu has a well-developed literature, and periodicals are published in the Zulu language, among them the newspaper Ilanga lase Natal. 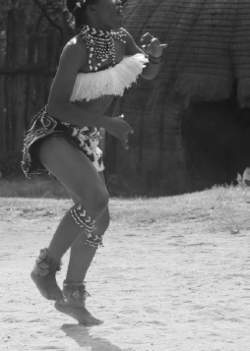 A Zulu woman performs a traditional dance. In Zulu culture, dreams are a way in which people may learn to communicate with their ancestors.

Dreams play an important role for the Zulu, a Nguni people who have lived in southern Africa since the third century C.E. Clan, lineage, and one’s age-set determine the basic bonds of Zulu society. All individuals belong to a particular lineage, consisting of the descendants of a common ancestor who founded their line. In addition, within each lineage various subdivisions trace their ancestry to a common grandfather. Above the lineage is the clan, consisting of numerous lineages linked together by a common founder after whom the clan was named. Each person belongs to an age-set including everyone within a three-year span.

The Zulu traditionally live in huts, in the back of which is generally situated a small area reserved for the ancestors, who are believed to dwell in the village. The ancestors are often consulted, and at times are believed to visit the living through dreams, which are interpreted by the diviners, or in the form of snakes. More rarely they return in the form of their ghost, when the appropriate rituals have not been observed after a death.

Zulu dreams, which can greatly influence the life of the individual, are the principal channel of communication with the ancestors, who play a fundamental role in Zulu society. In particular, they are believed to offer protection to members of their lineage, by whom they must be appeased and respected. Through dreams, the ancestral spirits can express both approval and disapproval of the actions—past, present, and future—of their descendants. Also, dreams are of diagnostic and prognostic significance in the tribal medical system, especially when psychogenic disorders occur.

Many dreams are believed to be prophetic and to indicate a course of action to be followed by the dreamer. For example, as Lucien Levy-Bruhl suggests, a Zulu will treat a friend as an enemy because of a dream in which the latter intended to hurt him. The omen of the dream may be either similar or opposite to its apparent content, presenting a pattern typical of the interpretation of dreams in Western countries, where dream reversal is often suspected.

Dreams possess the status of superior realities and are generally seen to have an active power. Their reality is not limited to what is seen and heard. For example, in Zulu thinking a pain in the shoulders after dreaming represents a sign of spirit activity.

An analysis of Zulu dream contents by the psychiatrist S.G. Lee emphasizes the small number of major categories into which Zulu dreams can be classified. In this study, Zulu dreams also seem to be stereotyped in terms of central imagery.

Lee also compares the dreams of men and women, which appear to be circumscribed and influenced by the social pressures and sanctions of the culture. The dreams of women, in particular, seem to be largely circumscribed by prohibitions from the indigenous system of social sanctions of the last century, and generally their dreams appear to be appropriate to their age, status, and role. Additionally, according to Lee there is little symbolism in dreams connected to important events of personal life, and local interpretations of symbols coincide with orthodox psychoanalytical interpretations.

Feedback
Flashcards & Bookmarks ?
Please log in or register to use Flashcards and Bookmarks. You can also log in with
Flashcards ?
My bookmarks ?
+ Add current page to bookmarks
Mentioned in ?
References in periodicals archive ?
The prince remarked to the Zulu King: "You haven't aged a bit" having last met during Charles' tour in South Africa in November 2011.
Charles meets Zulus to mark Rorke's Drift anniversary
They marked the 140th anniversary of the Battle of Rorke's Drift, where just over 150 Welsh soldiers held off 4,000 Zulu warriors from breaking British lines for 10 straight hours in South Africa.
Royals meet Zulus to mark war anniversary
Their heroism at Rorke's Drift came only hours after the humiliation of the army's defeat at Isandlwana, where 20,000 Zulus annihilated a 1,800-strong British force.
The Midland truth about ZULU
Despite the fact that the Zulu held some negotiating power, the missionaries saw themselves as more the powerful partners, responsible for removing the Zulus' grievances.
A "native ministry" for God's "step children"? The evolution of missional policy toward the Zulu in the Anglican Diocese of Natal, South Africa: 1904-1917
By the end of the operation, which had involved the then high-tech use of covert video and photography, scores of Zulus had been arrested and brought before the courts, with many of the main players jailed.
How we conquered the Zulu Warriors; A dramatic new book reveals for the first time how undercover police smashed Birmingham City's notorious Zulu Warriors football hooligan gang. Jeanette Oldham reports
Historical discourses about identities in Africa have spanned myriad dimensions, including those that are social, economic, cultural, political, linguistic, and "ethnic." Perhaps among the most debated and deconstructed of identities has been that of the Zulu, and this study adds significantly to this growing historiography.
The Other Zulus: The Spread of Zulu Ethnicity in Colonial South Africa
Stanley Baker Retrospective at Chapter Arts Centre, Cardiff This year sees the 50th anniversary of classic film Zulu and to celebrate the milestone, one Cardiff venue will be paying homage to its star Stanley Baker.
preview [...]
The Zulus finally withdraw, but not before delivering a haunting song, saluting the courage of the defenders.
50 years of Zulu the movie and a real-life North hero
The Mighty Zulu Nation Theatre Company wowed pupils and staff with a powerful spectacle of traditional Zulu culture.
Zulus give mesmerising performance
During my visits I became acutely aware of the strong Zulu culture and traditions that still influence health perceptions, the seeking of medical care and uptake of therapy, both conventional and traditional.
Understanding Zulu beliefs and customs in relation to HIV
IN 1879, a garrison of just 139 British soldiers defended the mission station at Rorke's Drift in KwaZulu Natal, South Africa, from intense attack by 4,000 Zulu warriors.
SAS hero's battle for Zulu war hero
A series of white cairns mark the spots where the British soldiers were buried in mass graves after battles such as Isandlwhana where more than 1,000 British troops were wiped out by attacking Zulus.
HONOUER TO THE HEROES; Zulu warriors to get monument for their part in Rorke's Drift massacre