monastic house, especially among Benedictines and Cistercians, consisting of not less than 12 monks or nuns ruled by an abbot or abbess. Many abbeys were originally self-supporting. In the Benedictine expansion after the 8th cent., abbeys were often important centers of learning and peaceful arts and, like FuldaFulda
, city (1994 pop. 58,710), Hesse, central Germany, on the Fulda River. It is a banking and financial center. Manufactures include textiles and clothing. Fulda grew around a Benedictine abbey founded in 744 by Sturmius, a pupil of St. Boniface, the missionary.
..... Click the link for more information. , were sometimes the nuclei of future towns. The buildings surround a church and include a dormitory, refectory, and guest house, all surrounded by a wall. The courtyard, derived from the Roman atriumatrium
, term for an interior court in Roman domestic architecture and also for a type of entrance court in early Christian churches. The Roman atrium was an unroofed or partially roofed area with rooms opening from it. In early times its center held a cooking hearth.
..... Click the link for more information. , was a usual feature, as was the cloistercloister,
unroofed space forming part of a religious establishment and surrounded by the various buildings or by enclosing walls. Generally, it is provided on all sides with a vaulted passageway consisting of continuous colonnades or arcades opening onto a court.
..... Click the link for more information.  or arcade surrounding the court. Cluniac abbeys were always ornate, Cistercian ones notably bare. The CarthusiansCarthusians
, small order of monks of the Roman Catholic Church [Lat. abbr.,=O. Cart.]. It was established by St. Bruno at La Grande Chartreuse (see Chartreuse, Grande) in France in 1084.
..... Click the link for more information.  with their special polity developed an altogether different structure called the charterhouse.
The Columbia Electronic Encyclopedia™ Copyright © 2013, Columbia University Press. Licensed from Columbia University Press. All rights reserved. www.cc.columbia.edu/cu/cup/

The monastic buildings of religious bodies governed by an abbot or abbess.

a Catholic monastery governed by a father superior or, in a convent, by a mother superior, subordinate to a bishop and sometimes directly to the pope. The larger and wealthier monasteries owned much land and often played an important religious, political, and economic role in feudal Western Europe. Such monasteries included the abbeys of Cluny, Saint-Denis, Port Royal, Saint Gall, Fulda, and Monte Cassino. During the Reformation and especially during the bourgeois revolution, the abbey lost its significance in the life of European society. Many abbeys were liquidated, but some still exist today.

What does it mean when you dream about an abbey?

Dreaming of a convent or monastery may indicate that the dreamer needs to spend some time alone reflecting, or even needs to seek spiritual nourishment. Alternatively, it may symbolize isolation from the normal flow of life. 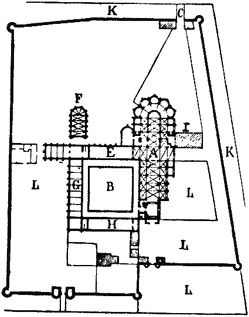 Feedback
Flashcards & Bookmarks ?
Please log in or register to use Flashcards and Bookmarks. You can also log in with
Flashcards ?
My bookmarks ?
+ Add current page to bookmarks
Mentioned in ?
References in classic literature ?
'That Gaffer has a skill in finding what he finds, who doubts, man?' asked Miss Abbey.
Miss Abbey knitted her brow at him, as he darkly leered at her.
'Mind you!' returned the other, stretching forward over the half door to throw his words into the bar; for his voice was as if the head of his boat's mop were down his throat; 'I say so, Miss Abbey! And mind you!
Gaffer was not there, but a pretty strong muster of Miss Abbey's pupils were, who exhibited, when occasion required, the greatest docility.
Exactly at the closing hour, all the guests who were left, filed out in the best order: Miss Abbey standing at the half door of the bar, to hold a ceremony of review and dismissal.
'You Bob Gliddery,' said Miss Abbey to this pot-boy, 'run round to Hexam's and tell his daughter Lizzie that I want to speak to her.'
'Come in and sit ye down, girl,' said Miss Abbey. 'Can you eat a bit?'
'I have had mine too, I think,' said Miss Abbey, pushing away the untasted dish, 'and more than enough of it.
'Then why, in the name of Goodness,' quoth Miss Abbey, sharply,
View in context
"Doss thou bid me, the high cellarer of Fountain Abbey, to get down from my horse and kneel in the dirty road to pray to some beggarly Saxon saint?"
View in context
The cold repast was over, and the party were to go out once more to see what had not yet been seen, the old Abbey fishponds; perhaps get as far as the clover, which was to be begun cutting on the morrow, or, at any rate, have the pleasure of being hot, and growing cool again.Mr.
View in context
'There was a sullen darkness in the sky, and the sun had gone angrily down, tinting the dull clouds with the last traces of his wrath, when the same black monk walked slowly on, with folded arms, within a stone's-throw of the abbey. A blight had fallen on the trees and shrubs; and the wind, at length beginning to break the unnatural stillness that had prevailed all day, sighed heavily from time to time, as though foretelling in grief the ravages of the coming storm.
View in context