(yĕt`ē), humanlike creature so named because it is associated with the perpetual snow region of the Himalayas. A figure unknown except through tracks ascribed to it and through alleged encounters, it is described as being 6 to 8 ft (1.8 to 2.4 m) tall and covered with long, dark hair. Attempts after the 1950s to verify the authenticity of its tracks (notably by Sir Edmund HillaryHillary, Sir Edmund Percival,
1919–2008, New Zealand mountain climber and explorer. He went on many mountain-climbing expeditions before 1953, when he and Tenzing Norgay of Nepal were the first people to reach the summit of Mt. Everest.
..... Click the link for more information.  in 1960) have yielded no conclusive results. Most scientists dismiss the existence of the creature; some advocates have suggested it may be a kind of ape. Supposed hair and other samples that have had their DNA tested have been found to be from known animal, primarily bear, species; some samples were from ancient polar bears, which has contributed to speculation that the creature might be an unknown bear species. A somewhat similarly described creature of W North America is known as BigfootBigfoot
or Sasquatch,
large apelike creature reportedly sighted hundreds of times in the United States and Canada (most often in the Pacific Northwest) since the mid-19th cent.
..... Click the link for more information.  or Sasquatch. 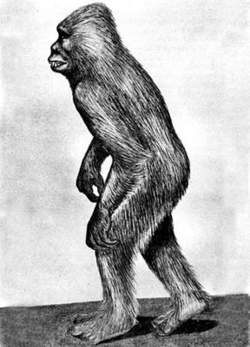 In 1832, B. H. Hodson, a British representative writing from Nepal, described a creature that allegedly attacked a group of his servants. Members of the local population told him he had described a Raksha, from the Sanskrit for "demon." This appears to be the first Western report of an unsubstantiated, many say mythical, beast who stands some seven to nine feet tall, is very hairy, and leaves behind mysterious footprints along with what is often described as a very disagreeable odor.

Since then similar reports have come from China, Vietnam, Siberia, Canada, and northwestern sections of the United States. The creature is called Yeti, Bigfoot, Sasquatch, Abominable Snowman, and even, in a Hollywood movie, "Hairy," a creature who moves in with the Henderson family.

Usually it is reported that indigenous people, including Buddhist monks living in a monastery in Nepal, take for granted the existence of these creatures. But the first reported name, "demon," suggests the existence of a religious mythology.

1. Because no hard evidence has yet been fully accepted by the scientific community, the creature does not exist except as a mythological personification of normal human fears—a way of explaining the unknown, as perhaps Greek and Roman mythologies do.

2. Such creatures possibly exist, and their discovery may point to earlier evolutionary human ancestors or cousins.

3. Such creatures exist and various cults have formed around them, each with its own explanation of where the creatures came from and why they are here. One theory says that when three of the Ten Lost Tribes of Israel migrated to the Americas sometime after the eighth century BCE (see Babylonian Captivity; Book of Mormon; and Eliot, John), descendants of Goliath of Gath, whose ancestors are thought to be the "giants" described in the Bible in Numbers 13, came with them. When Goliath, the nine-foot-tall Philistine warrior, was slain by David, the shepherd boy, he apparently left behind relatives who, by all accounts, were much more peace-loving than he was. This view is substantiated by 1 Chronicles 20, which speaks of "brothers" of "Goliath, slain by David." Other accounts seem to associate Yetis with the UFO culture, identifying them either as aliens or creatures contacted by aliens in the distant past, and with whom the aliens are possibly still in touch. Still others see in the Abominable Snowman a godlike or demonlike creature existing outside normal human understanding.

This mythology is perhaps most evident in the religious traditions of Indian communities found throughout North America, but best illustrated by stories told in the northern Plains cultures. Peter Matthiessen, while doing research for his book In the Spirit of Crazy Horse, discovered that many Indian elders knew of and had seen a messenger who appears in evil times as a warning from the Creator that man's disrespect for His sacred instructions has upset the harmony and balance of existence... He has strong spirit powers and sometimes takes the form of a huge, hairy man. In recent years this primordial being has appeared near Indian communities from the northern Plains states to far northern Alberta and throughout the Pacific northwest.

So great is the mystery surrounding this creature that he is sometimes alluded to only as "That-One-You-Are-Speaking-About." Others simply call him the "Big Man."

Perhaps illustrating a marriage of traditional indigenous beliefs with Christianity, some Indian elders believe the creature to be Unk-cegi, which means "Brown Earth,"

or, less delicately, "Brown Dung," the filth of creation. The story goes that Unk-cegi lived long ago during the time of the big animals but was drowned with them during the Great Flood. He was safely buried for a long time, but now that the white man had been burrowing deep and exploding bombs under the earth in a relentless search for minerals, the spirit of Unk-cegi has been released through the resultant fissures to roam the earth in warning. As the time of the end grows nearer, according to the belief, there will be more and more sightings.

Feedback
Flashcards & Bookmarks ?
Please log in or register to use Flashcards and Bookmarks. You can also log in with
Flashcards ?
My bookmarks ?
+ Add current page to bookmarks
Mentioned in ?
References in periodicals archive ?
The other questionable description is the familiar expression "Aboriginal." Deconstructing the word, the prefix "ab", used in such other well-known words as abominable (as in the Abominable Snowman), abhorrent, absurd, abysmal, abnormal, abscess, abase, abject, to name a few, all have a negative connotation.
It loses something in the translation
Previous encounters of footprints of the mythological 'Yeti' also known as the 'Abominable Snowman' have taken place in this area, with the earliest known photograph taken by a British explorer Eric Shipton in 1951.
First Indian Army Mountaineering Expedition to Mt Makalu led to discovery of 'Yeti' footprints
One such type of show recycles for the nth time the old yarn about the Sasquatch or the Abominable Snowman.
When TV shows overstay their welcome
C4, 8pm Though he has been part of Tibetan folklore for millennia, it was the 19th century when the yeti, or Abominable Snowman as he was later nicknamed in 1921, first caught the imaginations of many.
SUNDAY
Explosions of comic book violence, including a slip-sliding tussle between the Abominable Snowman and high school students on an ice rink, are orchestrated with black humour and vim.
GOOSEBUMPS (PG) COMIC whirlwind Jack [...]
He's a vet whose on-screen CV reads: "Bigfoot Files (searched for the Abominable Snowman but found five bears, three cows, three horses, two dogs, one deer, a racoon, a porcupine, one person and a piece of fibreglass).
Mark's Dead daft
LONDON -- A British scientist says he may have solved the mystery of the Abominable Snowman -- the elusive ape-like creature of the Himalayas.
Yeti linked to ancient polar bear; DNA connection to prehistoric animal
Yetis, also known as the "Abominable Snowman" or "Bigfoot", have been recorded for centuries in the Himalayas, with local people and mountaineers claiming to have seen hairy, ape-like creatures.
Yeti mystery may be solved by DNA study; BRITAIN IN BRIEF
And other characters like Randall (Steve Buscemi), Roz (Bob Peterson) and The Abominable Snowman (John Ratzenberger) are back, too.
Ghouls out for summer
ABOMINABLE SNOWMAN: Cole Cook, of Tile Hill, with the snow monster he made with brother Charlie
Grit the roads... or I'll burn down the Town Hall; DJ FORCED TO APOLOGISE OVER ON-AIR RANT
Rautavaara's austere sound palette conjured up an icy landscape while a slightly cliched harp glissando suggested film music, reminding me of Humphrey Searle's score for the Hammer horror classic The Abominable Snowman. When the choir entered, doing a creditable attempt at sounding disembodied, we were in Vaughan Williams' territory - his score for Scott of the Antarctic.
City of Birmingham Choir Symphony [...]; CLASSICAL REVIEWS
In more a perfect universe everyone would regard the Bostonian proto-punk His back catalogue contains such an embarrassment of sonic riches - Roadrunner, Abdul & Cleopatra, Egyptian Reggae, Pablo Picasso, Abominable Snowman In The Supermarket - that it's hard to know where to even start.
BEST SINGER-SONGWRITER; SHOWBIZ STORIES STORIES