[ak‚sel·ə′räm·əd·ər]
(engineering)
An instrument which measures acceleration or gravitational force capable of imparting acceleration.
McGraw-Hill Dictionary of Scientific & Technical Terms, 6E, Copyright © 2003 by The McGraw-Hill Companies, Inc.
The following article is from The Great Soviet Encyclopedia (1979). It might be outdated or ideologically biased.

a device for measuring acceleration (g-overloads) created by space vehicles, rockets, airplanes, and other moving vehicles and by testing machines, engines, and so on.

Accelerometers are distinguished by the kind of motion that is measured—linear or angular; by their operating principles—for instance, mechanical or electromechanical, and so on; and by their function—measuring acceleration as a function of time or path. There are also peak-value accelerometers, which measure the time at which the object measured attains a specified acceleration level or the maximum value of the acceleration in a process going to completion rapidly—for example, in an impact process. An accelerometer combined with a recording instrument is known as an accelerograph.

Three-component accelerometers used in gravimetry— that is, in determination of the gravitational acceleration at sea level and in the air—record and treat accelerations resulting from the heaving or rolling of a ship or airplane at the point where a gravimeter or pendulous instrument is installed. The accelerometers employed in gravimetry are designed for the range of acceleration measurements around several hundred cm/sec2, and their accuracy is of the order of 1 cm/sec2.

A mechanical or electromechanical instrument that measures acceleration. The two general types of accelerometers measure either the components of translational acceleration or angular acceleration.

Continuously measuring seismic instruments are composed of a damped or an undamped spring-supported seismic mass which is mounted by means of the spring to a housing. The seismic mass is restrained to move along a predefined axis. Also provided is some type of sensing device to measure acceleration.

The type of sensing device used to measure the acceleration determines whether the accelerometer is a mechanical or an electromechanical instrument. One type of mechanical accelerometer consists of a liquid-damped cantilever spring-mass system, a shaft attached to the mass, and a small mirror mounted on the shaft. A light beam reflected by the mirror passes through a slit, and its motion is recorded on moving photographic paper. The type of electromechanical sensing device classifies the accelerometer as variable-resistance, variable-inductance, piezoelectric, piezotransistor, or servo type of instrument or transducer. 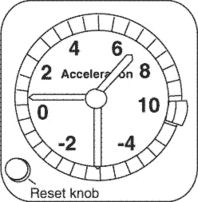 The accelerometer shows that the aircraft has recorded +7.5 and −3 g. Presently, the aircraft has 0.5 g.
An instrument for measuring acceleration along the normal (vertical), longitudinal, or lateral axis of an aircraft or missile. Accelerometers, which are fitted in aircraft cockpits, are called g meters. Most aircraft accelerometers indicate instantaneous acceleration, as well as the maximum positive and negative g applied since the instrument was last set.
An Illustrated Dictionary of Aviation Copyright © 2005 by The McGraw-Hill Companies, Inc. All rights reserved

Feedback
Flashcards & Bookmarks ?
Please log in or register to use Flashcards and Bookmarks. You can also log in with
Flashcards ?
My bookmarks ?
+ Add current page to bookmarks
Mentioned in ?
References in periodicals archive ?
Xuge Fan, a researcher in the Department for Micro and Nanosystems at KTH, says that the unique material properties of graphene have enabled them to build these ultra-small accelerometers.
KTH Royal Institute of Technology: World's smallest accelerometer points to new era in wearables, gaming
Caption: The quantum accelerometer uses a laser to cool atoms
UK unveils quantum accelerometer: The quantum accelerometer, the result of a five-year research programme, is based on super-cooled atoms, and has been designed for navigation on ships or trains
Li and colleagues used the accelerometer and gyroscope.
A Wearable Fall Detector for Elderly People
In accelerated motion ([f.sub.x] [not equal to] 0, [f.sub.y] [not equal to] 0), according to the accelerometer error parameters and (12), we can conclude that when [absolute value of [f.sub.y]] > 1.67g and [absolute value of [f.sub.z]] > 1.67g, the influence of the accelerometer scale factor errors aS[F.sub.y] and aS[F.sub.z] on the north velocity error and upward velocity error is greater than that of accelerometer bias [aB.sub.y] and [aB.sub.z].
A Preferable Airborne Integrated Navigation Method Based on INS and GPS
Olivier, "Shaker table validation of OpenMovement AX3 accelerometer," in Proceedings of the 3rd International Conference on Ambulatory Monitoring of Physical Activity and Movement, Amherst, Mass, USA, 2013.
Using Accelerometers to Measure Physical Activity in Older Patients Admitted to Hospital
There are various types of accelerometer sensors in the market.
A STUDY ON VIBRATION SENSORS FOR WATER PIPELINE LEAKAGE APPLICATION
Based on this and the prior assumptions, it is useful to fit a linear model of the response of each accelerometer to the measured response as a function of gimbal-rotation angle.
Gravity-Based Characterization of Three-Axis Accelerometers in Terms of Intrinsic Accelerometer Parameters
Displacement of accelerometer can also be established by using the receptance and reaction force F':
Correction of Transducers Mass Effects from the Measured FRFs in Hammer Impact Testing
The wired system block diagram is shown in Figure 5 and mainly consisted of a microcontroller unit (MCU; ADuC7020; Analog Devices Inc.) and accelerometer modules (ADXL345, Analog Devices Inc.).
Realization of a CORDIC-Based Plug-In Accelerometer Module for PSG System in Head Position Monitoring for OSAS Patients
Simulation and results of a capacitive accelerometer
Diseno y simulacion de un acelerometro con respuesta de sensibilidad mejorada
Smartphones can easily measure movement caused by a quake because they have three built-in accelerometers designed to sense the orientation of the phone for display or gaming.
New App Turns Smartphones into Worldwide Seismic Network
The accelerometer has an output power of 1.5 V when stopped; in a resting state, 1.5 V is 0g (gravity) and 1.833 V is 1g (gravity) (1g = 9.81 m/[s.sup.2]).
Gait Analysis of Conventional Total Knee Arthroplasty and Bicruciate Stabilized Total Knee Arthroplasty Using a Triaxial Accelerometer