(ăk'tənŏm`ətər), instrument used to measure the heating power of radiation. Actinometers are used chiefly in meteorology to measure solar radiation as transmitted directly by the sun, scattered by the atmosphere, or reflected by the earth. A number of different designs have been developed, including a small bimetallic strip or two bimetallic strips, one black and one white, heated by radiation. The subsequent bending of the strips is measured. Knowledge of such factors as the heat capacity of the strips, their surface area, their reflectivity, and the differences in their curvature produced by a given change in temperature gives the heating power of the radiation. In other designs, a sheet of photographic paper is exposed to the radiation to provide a measure of the total radiation over a period of time; cadmium sulfide photoconductive cells are also used, in which differences in light intensity change the resistance of a circuit.
The Columbia Electronic Encyclopedia™ Copyright © 2013, Columbia University Press. Licensed from Columbia University Press. All rights reserved. www.cc.columbia.edu/cu/cup/

(ak-tă-nom -ĕ-ter) An instrument for measuring the intensity of radiation.
Collins Dictionary of Astronomy © Market House Books Ltd, 2006
The following article is from The Great Soviet Encyclopedia (1979). It might be outdated or ideologically biased.

an instrument for measuring the intensity of direct solar radiation. The operating principle of an actinometer is based on the absorption of incident radiation by a blackened surface and the conversion of its energy into heat. The actinometer—unlike the pyrheliometer, which is an absolute instrument—is a comparison instrument because the intensity of radiation is judged according to the different phenomena associated with heating. For example, the operating principle of the Mikhel’son actinometer (Figure 1) is based on the heating by the solar rays of a soot-blackened bimetallic strip molded from iron and invar. Upon heating, the iron elongates, but the invar undergoes hardly any thermal expansion, so that the strip buckles. The degree of bending is a measure of the intensity of the solar radiation. By means of a microscope, observations are made on the displacement of a quartz fiber located at the end of the strip. 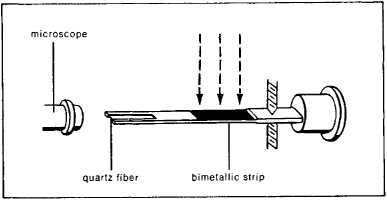 In the Savinov-Ianishevskii thermoelectric actinometer (Figure 2), the receiving part is a thin silver disk with a blackened outer surface; the central junctions of the thermoelements are cemented to the inner surface of the disk. 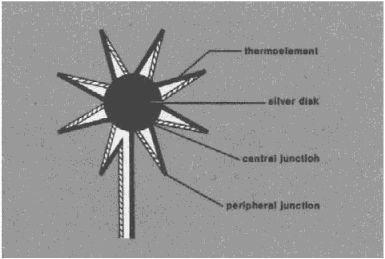 Figure 2. Receiving part of a Savinov-Ianishevskii actinometer (the Savinov “star”)

[‚ak·tə′näm·əd·ər]
(engineering)
Any instrument used to measure the intensity of radiant energy, particularly that of the sun.
McGraw-Hill Dictionary of Scientific & Technical Terms, 6E, Copyright © 2003 by The McGraw-Hill Companies, Inc.