viper, any of a large number of heavy-bodied, poisonous snakes of the family Viperidae, characterized by erectile, hypodermic fangs. The fangs are folded back against the roof of the mouth except when the snake strikes. Vipers are distributed throughout Eurasia and Africa. They range in size from under 1 ft (30 cm) to nearly 6 ft (2 m) and often have zigzag or diamond patterns. Best known is the common European viper, or adder (Vipera berus), distributed throughout Europe and N Asia. It feeds on small mammals and lizards and hibernates in winter. Its venom is rarely fatal to humans. The asp viper, or asp (V. aspis), is a smaller species inhabiting S Europe. The greatest variety of vipers is found in Africa. The brightly patterned Gaboon viper, Bitis gabonica, is the longest of the vipers and has a body diameter of up to 6 in. (15 cm). The puff adder, B. arietans, found over most of Africa and in Arabia, is a highly venomous species whose bite is often fatal. The pit vipers of the Americas, including the rattlesnake, copperhead, water moccasin, fer-de-lance, and bushmaster, are classified in a separate family. Vipers are classified in the phylum Chordata, subphylum Vertebrata, class Reptilia, order Squamata, family Viperidae.
The Columbia Electronic Encyclopedia™ Copyright © 2022, Columbia University Press. Licensed from Columbia University Press. All rights reserved.
The following article is from The Great Soviet Encyclopedia (1979). It might be outdated or ideologically biased.

an analogue computing device whose output represents a quantity that is proportional to the sum of the input quantities, or signals. Mechanical adders are used primarily for the summing of displacements. The slide rule, for example, can be classed as a mechanical adder; it sums linear displacements. The differential gear is a mechanical adder that sums angular displacements. In electromechanical adders, the input and output quantities are mechanical displacements, and summation is carried out through use of the principles of electric circuits, particularly Kirchhoff’s laws. Electrical adders sum currents or voltages. The most common types of adders used in electronic analogue computers sum currents. To increase accuracy and raise the power and amplitude of the output signal, such adders are supplemented by operational amplifiers (seeCOMPUTING AMPLIFIER).

the basic component of the arithmetic unit of a digital computer. Adders are used to peform the operation of addition of numbers.

When binary numbers are added digit by digit, the same process is used. The digits in the given digit place in the addends are summed, and to this result there is added the carry, if any, from the next lower place. Following the rules of addition in the binary number system, we thus obtain the digit in the given place of the final sum and the carry to the next higher place. 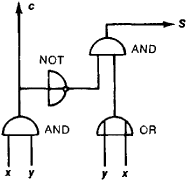 A multidigit adder for digit-by-digit addition usually consists of suitably connected single-digit adding units. The simplest such unit for the addition of binary numbers is called a half-adder. A half-adder may be formed, for example, from four logic elements (Figure 1): two AND gates, an OR gate, and a NOT gate, or inverter. The circuit of a half-adder may vary in accordance with the system of logic elements used. The half-adder adds the two numbers x and y to produce the sum digit S and the carry digit c (see Table 1). To construct a multidigit adder, however, a three-digit adding unit is necessary, since three numbers must be added: the addends xi and yi and the carry ci–1 from the next lower place. The output of such a three-input adding unit is the sum Si and the carry ci+1 to the next higher place. The outputs of such an adder for the various possible inputs are shown in Table 2. An example of a three-input adder is schematically presented in Figure 2.

of organizing the summation process (combinational and accumulating), and manner of organizing the carry circuits (sequential carry, ripple-through carry, group carry, and simultaneous carry). The type of adder chosen for a particular purpose depends primarily on the system of elements used in the computer and on the speed and economy requirements. Speed is one of the most important parameters of an adder. For the sake of speed in arithmetic operations, third-generation computers use not single-digit adders but group adders, which rapidly calculate the sums and carries for a group of digit places. 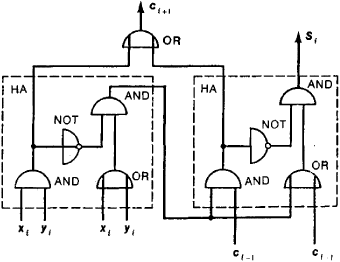 Figure 2. Schematic of a three-input adder consisting of two half-adders and an OR gate: (HA) half-adder, (xi) and (yi) addends, (ci – 1) carry from next lower digit place, (Si) sum, (ci + 1) carry to next higher digit place

Besides the basic operation of addition, most adders are also used for multiplication, division, and various logical operations, such as logical addition and logical multiplication.

[′ad·ər]
(computer science)
A computer device that can form the sum of two or more numbers or quantities.
(electronics)
A circuit in which two or more signals are combined to give an output-signal amplitude that is proportional to the sum of the input-signal amplitudes. Also known as adder circuit.
(vertebrate zoology)
Any of the venomous viperine snakes included in the family Viperidae.
McGraw-Hill Dictionary of Scientific & Technical Terms, 6E, Copyright © 2003 by The McGraw-Hill Companies, Inc.

1
1. a common viper, Vipera berus, that is widely distributed in Europe, including Britain, and Asia and is typically dark greyish in colour with a black zigzag pattern along the back
2. any of various similar venomous or nonvenomous snakes

2
a person or thing that adds, esp a single element of an electronic computer, the function of which is to add a single digit of each of two inputs
Collins Discovery Encyclopedia, 1st edition © HarperCollins Publishers 2005

An elementary electronic circuit that adds the bits of two numbers together. See half-adder.
Copyright © 1981-2019 by The Computer Language Company Inc. All Rights reserved. THIS DEFINITION IS FOR PERSONAL USE ONLY. All other reproduction is strictly prohibited without permission from the publisher.

Feedback
Flashcards & Bookmarks ?
Please log in or register to use Flashcards and Bookmarks. You can also log in with
Flashcards ?
My bookmarks ?
+ Add current page to bookmarks
Mentioned in ?
References in periodicals archive ?
"As well as the obvious pain associated with an adder bite, if a dog has an allergic reaction to the snake's venom, the severe swelling can result in breathing problems particularly if they have been bitten around the head or neck.
Vets warn dog walkers to beware snakes in the grass; Pet survives poisonous bite weeks after death of another
The Wildlife Trusts website states: "Our only venomous snake, the shy adder can be spotted basking in the sunshine in woodland glades and on heathlands.
Venomous snake slithered up children's pushchair as family strolled on beach; The incident was horrifying for the panicking parents
It said that de Adder never offered the Trump cartoon to the company and had already decided to "bring back" another cartoonist it said was popular with readers.
Canadian cartoonist fired after his caricature of Trump goes viral
Adders, the UK's only poisonous native snake, are beginning to stir now the weather is warm
Dog walkers warned of the risk of venomous snake attacks on pets; The warning follows reports of adder attacks in the UK
Dave Leicester, head of clinical intelligence at Vets Now, said: "Adders only bite a dog in self-defence, on the legs or face, resulting in a painful swelling.
snake fright; Your amazing animals and wonderful wildlife Pets and People their Dogs hit by surge in adder attacks
"We teach children to stop, step back and smile if they see an adder."
SNAKE'S ALIVE! Warning to watch your step as weather warms up
Mr Taylor said adders can be found at South Stack, Holyhead mountain and Newborough Warren.
ADDER ALERT FOR DOG WALKERS
The previous world record was by an Australian mathematician and his team for a 4-bit adder. We tried for a new world record with a 5-bit adder.
ABA STUDENTS CREATE WORLD RECORD WITH DOMINOES CIRCUIT
John Halksworth, senior product manager, Adder Technology, comments: "One of the most common issues our broadcast customers face when looking to migrate to digital is the size of transmitters and lack of space.
It all starts from Zero for Adder Technology
The most elementary constituent in the outline of the arithmetic block is a full adder, and the succeeding equations are frequently reflected in the pattern of a full adder.
An Architecture of 2-Dimensional 4-Dot 2-Electron QCA Full Adder and Subtractor with Energy Dissipation Study
Loss of sense of taste and smell are usually prominent features of berg adder bite.
Berg adder (Bitis atropos): An unusual case of acute poisoning
For simplicity, the 8 x 8 Add-Shift Multiplier using the GDI based full adder is considered.
Design of energy efficient and low power asynchronous 8*8 multiplier