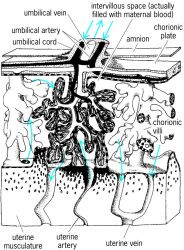 [plas·ən′tā·shən]
(botany)
The attachment of ovules along the inner ovarian wall by means of the placenta.
(embryology)
The formation and fusion of the placenta to the uterine wall.
McGraw-Hill Dictionary of Scientific & Technical Terms, 6E, Copyright © 2003 by The McGraw-Hill Companies, Inc.