agora (ăgˈərə) [Gr.,=market], in ancient Greece, the public square or marketplace of a city. In early Greek history the agora was primarily used as a place for public assembly; later it functioned mainly as a center of commerce. Usually in a readily accessible part of the city, it was often surrounded by the public buildings, such as the royal palace, the law courts, the assembly house, and the jail. A favorite architectural device was the colonnade surrounding the agora. One of the highest honors was to be granted a tomb in the agora. The agora was similar to the Roman forum.
The Columbia Electronic Encyclopedia™ Copyright © 2022, Columbia University Press. Licensed from Columbia University Press. All rights reserved. 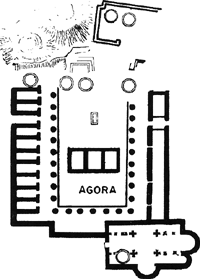