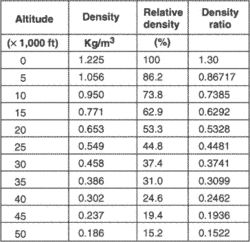 The mass per unit of volume of air in terms of weight per unit of volume. The unit for measurement is kilogram per cubic meter (i.e., kg/m3). The illustration shows the values of air density in a standard atmosphere at various altitudes.
An Illustrated Dictionary of Aviation Copyright © 2005 by The McGraw-Hill Companies, Inc. All rights reserved

Feedback
Flashcards & Bookmarks ?
Please log in or register to use Flashcards and Bookmarks. You can also log in with
Flashcards ?
My bookmarks ?
+ Add current page to bookmarks
Mentioned in ?
References in periodicals archive ?
And extraterrestrials are most likely to evolve on worlds with higher air density, slower orbits and more continents.
New worlds' more life than on Earth
By boosting the air density of the entire engine, marine turbochargers enhance overall output power.
Marine Turbochargers Market Increased Demand Expected to Soar Revenue during Forecast Period 2018 20
DeChambeau, who considers such variables as air density and elevation change in his pre-shot routine, went over his allotted time on No.
Higa makes history
The eminently flammable batteries were air-cooled to reduce weight, while the lower air density at high altitude meant the car would perform differently.
RACE TO THE TOP: How advanced simulation fuelled a record-breaking electric ascent
where [rho] is the air density, kg/[m.sup.3]; f is the Chezy-Darcy coefficient of friction; Per is the airway perimeter, m; v is the air velocity, m/s; A is the area, [m.sup.2]; L is the length, m.
ANALYSIS OF FIELD TEST RESULTS FOR THE OIL SHALE MINE VENTILATION SIMULATION
where [F.sub.rheo] is the rheological force, z the axial direction, [[rho].sub.a] the air density, [[rho].sub.f] the polymer density, V the fiber velocity, [V.sub.a] the air velocity, g the gravitational acceleration, and [C.sub.f] the air drawing coefficient.
Numerical Simulation the Air Jet Flow Field of a Dual Slot Inset Blunt Die in the Melt Blowing Nonwoven Process
Finally, Dumas commented that the electric vehicle is a good match for the mountain because "the power remains constant" despite the decreasing air density over the course.
From Pikes Peak to autonomous vehicles
The amount of energy that can be captured from moving air is a function of wind speed, wind collector area (called the swept area), and air density. You can calculate the wind energy available at a particular site with a particular machine yourself, but be sure to stick to one set of units--metric or imperial--when working with formulas.
Assess Your Site for: WIND POWER: If you're considering wind-electric generation, take a moment to assess potential sites for a turbine on your property
That altitude maximizes the efficiency of engines and keeps turbulence to a minimum as air density is much lower that far up.
London to New York in 2 hours; FANCY A DAY TRIP ACROSS THE ATLANTIC? Hypersonic jet could travel at 3900mph