[′er‚kraft prə‚pəl·shən]
(aerospace engineering)
The means, other than gliding, whereby an aircraft moves through the air; effected by the rearward acceleration of matter through the use of a jet engine or by the reactive thrust of air on a propeller.
McGraw-Hill Dictionary of Scientific & Technical Terms, 6E, Copyright © 2003 by The McGraw-Hill Companies, Inc.

Flying machines obtain their propulsion by the rearward acceleration of matter. This is an application of Newton's third law: For every action there is an equal and opposite reaction.

In propeller-driven aircraft, the propulsive medium is the ambient air which is accelerated to the rear by the action of the propeller. The acceleration of the air that passes through the engine provides only a secondary contribution to the thrust.

In the case of turbojet and ramjet engines, the ambient air is again the propulsive medium, but the thrust is obtained by the acceleration of the air as it passes through the engine. After being compressed and heated in the engine, this air is ejected rearward from the engine at a greater velocity than it had when it entered. See Jet propulsion

Rockets carry their own propulsive medium. The propellants are burned at high pressure in a combustion chamber and are ejected rearward to produce thrust. See Rocket propulsion

In every case, the thrust provided is equal to the mass of propulsive medium per second multiplied by the increase in its velocity produced by the propulsive device. This is substantially Newton's second law.

The airplane lift-drag ratio L/D is a primary factor that determines the thrust required from the propulsion system to fly a given airplane. To sustain flight, the airplane lift must be equal to airplane gross weight, and the engine thrust must be equal to the airplane drag. The higher the lift-drag ratio, the more efficient is the airplane. A sharp reduction in L/D occurs with increase in flight Mach number in the vicinity of a Mach number of unity, and this is reflected in a sharp increase in the thrust required for flight. Flight Mach number is the ratio of the airplane speed to the speed of sound in the ambient atmosphere. At standard sea-level conditions, the speed of sound is 773 mi/h (346 m/s).

The competition among nations and among commercial airlines has created a continuing demand for increased flight speed. The reduction in aircraft L/D that accompanies an increase in speed (see illustration) requires an increase in engine thrust for an airplane of a given gross weight. For a given engine specific weight, an increase in required engine thrust results in an increase in engine weight and hence a reduction in fuel load and payload that an airplane of a given gross weight can carry. If the engine weight becomes so large that no fuel can be carried by the airplane, the airplane has zero flight range regardless of the efficiency of the engine. At some speed before this point is reached, it becomes advantageous to shift to an engine type that has a lower specific engine weight even at the cost of an increased specific fuel consumption. 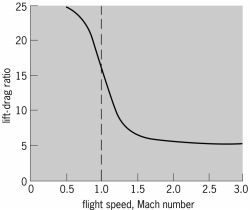 At low subsonic flight speeds, the piston-type reciprocating engine, because of its low specific fuel consumption, provides the best airplane performance in terms of payload and flight range. As flight speed increases, specific weight of reciprocating engines increases because of falling propeller efficiency. This effect, coupled with reduction in L/D which accompanies increase in flight speed, results in the weight of reciprocating engines becoming excessive at a flight speed of about 400 mi/h (180 m/s). At about this speed it is advantageous to shift to the lighter-weight turboprops even if the efficiency of the latter is poorer. At about 550 mi/h (245 m/s) it is advantageous to shift from the turboprop to the lighter but less efficient turbojet. Intermediate between the turboprop and turbojet in the spectrum of flight speeds is the turbofan. See Reciprocating aircraft engine, Turbofan, Turbojet, Turboprop

Feedback
Flashcards & Bookmarks ?
Please log in or register to use Flashcards and Bookmarks. You can also log in with
Flashcards ?
My bookmarks ?
+ Add current page to bookmarks
Mentioned in ?
References in periodicals archive ?
Turbines have played a large role in these two sectors, specifically in electric power production and in aircraft propulsion. Still, the demand for turbines and related products is highly cyclical and quite volatile.
The global marketplace for turbines
It could also result in reduction in aircraft propulsion installation weight through inlet/ nozzle/wing structure integration and elimination of aircraft control surfaces through differential and vectoring thrust for pitch, roll and yaw moments, says Singh.
Flight to the future
Among the novel aircraft propulsion concepts considered are adaptive propulsion system cycles, distributed mini engines, an exoskeletal engine, and pulse detonation engines.
Fresh air, wide-open space Researchers are developing a new vision of flight, a future of ever-safer, more efficient vehicles and system controls
The engine is considered as the heart of any powered-aircraft system where aircraft nacelle is the essential compliment which constitutes the aircraft propulsion system.
Aircraft Nacelle Market Poised to Register Healthy Expansion During 2018 - 2028
In 1926, two years before Mortimer's suggested starting point, following Griffith's paper entitled "An aerodynamic theory of turbine design," the Royal Aircraft Establishment (RAE) started research work on axial-flow gas turbines for aircraft propulsion.
History in the jet stream
This milestone takes the company's commercial grade all-electric motors out of test cells and onto a commercial aircraft platform, advancing the future of commercial aircraft propulsion.
magniX completes testing of new aircraft propeller to advance electric aviation platform
Safran Nacelles, an international high-technology group operating in the aircraft propulsion and equipment, space and defence markets, disclosed on Tuesday that it has delivered the 2000th thrust reverser for Honeywell HTF7000 engines, strengthening Safran's position as the leading manufacturer of thrust reversers for business jets.
Safran Nacelles announces delivery of 2,000th thrust reverser for Honeywell HTF7000 engines