[′er‚kraft ‚test·iŋ]
(aerospace engineering)
The subjecting of an aircraft or its components to simulated or actual flight conditions while measuring and recording pertinent physical phenomena that indicate operating characteristics.
McGraw-Hill Dictionary of Scientific & Technical Terms, 6E, Copyright © 2003 by The McGraw-Hill Companies, Inc.

Subjecting a complete aircraft or its components (such as wings, engines, or electronics systems) to simulated or actual flight conditions in order to measure and record physical phenomena that indicate operating characteristics. Testing is essential to the design, development, and acceptance of any new aircraft.

Aircraft and their components are tested to verify design theories, obtain empirical data where adequate theories do not exist, develop maximum flight performance, demonstrate flight safety, and prove compliance with performance requirements. Testing programs originate in laboratories with the evaluation of new design theory; progress through extensive tests of components, subsystems, and subsystem assemblies in controlled environments; and culminate with aircraft tests in actual operational conditions.

Instrument testing, in controlled conditions of environment and performance, is used extensively during the design performance assessment of new aircraft to avoid the costly and sometimes dangerous risks of actual flight.

A wind tunnel is basically an enclosed passage through which air is forced to flow around a model of a structure to be tested, such as an aircraft. Wind tunnels vary greatly in size and complexity, but all of them contain five major elements: an air-drive system, a controlled stream of air, a model, a test section, and measurement instruments. The drive system is usually a motor and one or more large fans that push air through the tunnel at carefully controlled speeds to simulate various flight conditions. A scale model of an actual or designed aircraft is supported inside the test section (see illustration), where instruments, balances, and sensors directly measure the aerodynamic characteristics of the model and its stream of airflow. Wind tunnel tests measure and evaluate airfoil (wing) and aircraft lift and drag characteristics with various configurations, stability and control parameters, air load distribution, shock wave interactions, stall characteristics, airflow separation patterns, control surface characteristics, and aeroelastic effects. 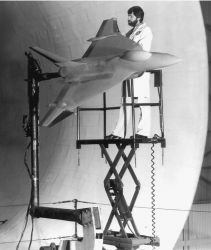 Rocket-propelled sled tests evaluate crew ejection escape systems for high-performance aircraft. A fuselage section, mounted on a sled, is propelled by rockets along fixed tracks. When a desired speed is reached, the ejection mechanism is automatically triggered, firing rockets that propel crew seats (containing instrumented mannequins) clear of the fuselage, and activating parachutes to limit the free-flight trajectory of the mannequins and allow safe descent to the ground. Water-propelled sled tests study landing gear systems and runway surface materials. Other dynamic ground tests include acceleration and arresting tests of aircraft fuel system venting, transfer, and delivery, which are evaluated while the system is subjected to flightlike forces and attitudes.

Proof load tests of actual aircraft are usually done on one or more of the first airframes built. An airframe, mounted in a laboratory, is fitted with thousands of strain gages, the outputs of which are recorded on an automatic data-recording system. Simulated air and inertia loads are applied to airframe components, which are loaded simultaneously, in specified increments, to simulate loads encountered during takeoff, maneuvering flight, and landing. Loadings are increased to design limit and then to ultimate failure to locate possible points of excessive yield. Component parts and system subassemblies are also tested with various loadings while operating under expected extremes of temperature, humidity, and vibration to determine service life. See Airframe

Aircraft flight and systems characteristics are represented with varying degrees of realism for research, design, or training simulation purposes. The representation is usually in the form of analytic expressions programmed on a digital computer. Flight simulation may be performed with or without a human pilot in the loop. The pilot imposes additional constraints on the simulator such as requiring a means of control in a manner consistent with the means provided in the aircraft being simulated. Flight simulation requires representation of the environment to an extent consistent with the purposes of the simulation, and it further requires that all events in the simulator occur in real time. Real time is a term which is used to indicate that all time relationships in the simulator are preserved with respect to what they would be in the airplane in flight. See Real-time systems

Simulators range in size and complexity from actual aircraft, outfitted with special flight decks that can be reconfigured to test different systems, to desk-top simulators that can test individual or integrated components.

Simulators may be classified by their use in research, design, or training. Research simulators are usually employed to determine patterns of human behavior under various workloads or in response to different flight instrument display configurations or different aircraft dynamic characteristics. Design simulators are used to conduct tradeoff studies to evaluate different design approaches in the aircraft. The most pervasive use of flight simulators is for training operators of the aircraft and its systems and maintenance personnel. The simulator is in many cases a better training device than the aircraft. This is true because of the safety, versatility, and speed with which critical maneuvers may be performed.

Flight testing can be considered the final step in the proving of a flight vehicle or system as capable of meeting its design objectives. This definition applies whether the concept is a complete vehicle, a vehicle subsystem, or a research concept. Flight testing can be categorized as research, development, and operational evaluation. These categories apply both to aircraft and to spacecraft and missiles.

The purpose of research testing is to validate or investigate a new concept or method with the goal of increasing the researchers' knowledge. Many times, the vehicle used is a one- or two-of-a-kind article designed specifically for the concept being investigated.

A new vehicle or subsystem enters development testing after it has been designed and the basic concepts proven in research flight testing. During this phase of testing, problems with the design are uncovered and solutions are developed for incorporation in the production aircraft.

Feedback
Flashcards & Bookmarks ?
Please log in or register to use Flashcards and Bookmarks. You can also log in with
Flashcards ?
My bookmarks ?
+ Add current page to bookmarks
Mentioned in ?
References in periodicals archive ?
The test team conducted standard aircraft testing exercises.
World's largest aircraft completes historic first flight
From that effort, fuels showing promise were selected for Phase II, which is an engine and aircraft testing program.
Landsberg Becomes NTSB Vice-Chairman: Former AOPA Air Safety Institute president joins federal transportation safety advocate
The KC-46 test program is now transitioning to follow-on receiver aircraft testing and certifications required for operational testing starting in 2019.
U.S. Air Force says completed final tests for Boeing KC-48 program
The latest extension will see Boeing continue to use the facility for its commercial aircraft testing until at least 2024.
KEEP THE WIND BLOWING
For the last decade, all of their aircraft testing and evaluation has been handed over to the intense scrutiny of the Royal Canadian Air Force, with oversight from Transport Canada.
On a mission of relief: Hybrid aircraft maker looks to connect the Far North
In the first part he describes the ten evaluation sites where most aircraft testing was conducted.
Luftwaffe X-Planes: German Experimental Aircraft of World War II
"It is estimated that the evaluation period for the selection of the successful bidder, which includes aircraft testing, may take up to six months, after closing of the RFP (request for proposal)," said Pierre-Alain Bujold, spokesman for Public Services and Procurement Canada.
FWSAR replacement project finally gets off the ground: David Pugliese recaps the oft-delayed fixed-wing search and rescue (FWSAR) project and looks at the offerings presented by the three contendere: Airbus, Alenia and Embraer
Elizabeth went on to Llanbedr, which re-opened in May 2014 as a site for aircraft testing.
Daughter tours RAF base for her pilot father
The regular snow and sub zero temperatures make aircraft testing and engine break-in very difficult.
Pete eyes better result
From protecting expensive broadcast equipment from rain showers at Wimbledon, to sales presentation packs for artificial knee joints, or operational bags for aircraft testing equipment; CP Cases says it can provide a solution.
Protective bags
The component system and aircraft testing programme has accumulated more than 3,000 hours of tests on seven bespoke testing benches and rigs, including ground manoeuvres in Toulouse, France, on an A320 modified for the purpose.
The Green Taxi: Tom Allett looks at a 'green' aircraft taxiing system demonstrated at this year's Paris Air Show