[′er‚frām]
(aerospace engineering)
The basic assembled structure of any aircraft or rocket vehicle, except lighter-than-air craft, necessary to support aerodynamic forces and inertia loads imposed by the weight of the vehicle and contents.
McGraw-Hill Dictionary of Scientific & Technical Terms, 6E, Copyright © 2003 by The McGraw-Hill Companies, Inc.

The structural backbone of an aircraft that balances the internal and external loads acting upon the craft. These loads consist of internal mass inertia forces (equipment, payload, stores, fuel, and so forth), flight forces (propulsion thrust, lift, drag, maneuver, wind gusts, and so forth), and ground forces (taxi, landing, and so forth).

The strength capability of the airframe must be predictable to ensure that these applied loads can be withstood with an adequate margin of safety throughout the life of the airplane. In addition to strength, the airframe requires structural stiffness to prevent excessive deformation under load and to provide a satisfactory natural frequency of the structure (the number of times per second the structure will vibrate when a load is suddenly imposed or changed). The aerodynamic loads on the airframe can oscillate in magnitude under some circumstances, and if these oscillations are near the same rate as the natural frequency of the structure, runaway deflections (called flutter) and failure can occur. Consequently, adequate structural stiffness is needed to provide a natural frequency far above the danger range. See Aeroelasticity

The overall airframe structure is made up of a number of separate components, each of which performs discrete individual functions. The fuselage provides the accommodations of crew, passengers, cargo, fuel, and environmental control systems. The empennage consists of the vertical and horizontal stabilizers, which are used, respectively, for turning and pitching flight control. The wing passing through the air provides lift to the aircraft. Its related control devices, leading-edge slats and trailing-edge flaps, are used to increase this lift at slow airspeeds, such as during landing and takeoff, to prevent stalling and loss of lift. The ailerons increase lift on one side of the wing and reduce lift on the other in order to roll the airplane about its fore-and-aft axis. See Fuselage, Wing

Performance requirements (range, payload, speed, altitude, landing and takeoff distance, and so forth) dictate that the airframe be designed and constructed so as to minimize its weight. All the airframe material must be arranged and sized so that it is utilized as near its capacity as possible, and so that the paths between applied loads and their reactions are as direct and as short as possible. The accomplishment of these goals, however, is compromised by constraints such as maintenance of the aerodynamic shape, the location of equipment, minimum sizes or thicknesses that are practical to manufacture, and structural stability, among others.

To maintain structural efficiency (minimum weight), the material that forms the aerodynamic envelope of the airplane is also utilized as a primary load-carrying member of the airframe. For example, the thin sheets that are commonly used for outer fuselage skins are very efficient in carrying in-plane loads like tension and shear when they are stabilized (prevented from moving or deflecting out of the way when loads are applied). This structural support is provided by circumferential frames and longitudinal primary members called longerons. The compression loads are also carried in the longerons and the thin skins when they are additionally stabilized by multiple secondary longitudinal stiffeners that are normally located between the frames. Illustration a shows a typical fuselage primary load path structure indicating the frames and longerons. This skeleton will be covered by thin skins. 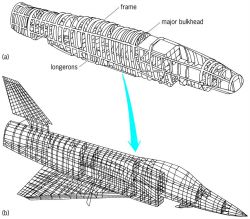 Various analytical techniques may be used to determine the internal stress levels for each of the airframe components. The most common analytical methods use the technique of reducing these highly complex structural arrangements into a group of well-defined simple structures known as finite elements. This simplification allows the load distribution to be solved by a series of algebraic equations.

The finite element model used for the determination of the internal load distribution must support various structural objectives that include the analysis of strength, stiffness, and damage tolerance characteristics of the aircraft. In order to accomplish these objectives the finite element model must represent the vehicle configuration in sufficient detail to define adequately the basic characteristics of the local structural load paths and provide for application of all external loading parameters. Illustration b shows the complete finite element model of an airframe. The many varied loading parameters include airloads, structural weight, engine thrust, landing gear reactions, fuel tanks, cargo, and passengers. Environmental factors such as cabin pressure and structural heating must also be considered.

i. The fuselage, booms, nacelle, cowlings, fairings, airfoil surfaces (including rotors but excluding propellers and rotating airfoils of engines), and landing gear of an aircraft (but excluding tires) and their accessories and their controls. In short, the complete aircraft excluding its engine(s) but including its engine mounts. The shaded portions in the illustration indicate the airframe.
ii. The assembled structural components of a missile but excluding its propulsion system, controls, electronic equipment, and payload.
iii. The framework, envelope, and cabin of an airship.
An Illustrated Dictionary of Aviation Copyright © 2005 by The McGraw-Hill Companies, Inc. All rights reserved

Feedback
Flashcards & Bookmarks ?
Please log in or register to use Flashcards and Bookmarks. You can also log in with
Flashcards ?
My bookmarks ?
+ Add current page to bookmarks
Mentioned in ?
References in periodicals archive ?
Composites manufacturing team members working on this project include Composites Universal Group in Warren, Oregon, and Decavo in Hood River, Oregon, which will deliver the prototype airframe structures.
FlightHouse Engineering to design, manufacture VTOL airframe
With fourth-generation fighter airframes, speed and energy equaled life and survivability.
Intelligence support for the F-35A Lightning II
Airframes Alaska was flat on its back in November 2011 when McLaughlin assumed ownership of the company in lieu of several months back rent.
Airframes Alaska takes off: aviation fabricator testing new three- and four-passenger Super Cub fuselage designs
Going beyond a pretty face, the books also provide a wealth of information on the aircraft they cover, whether it is the history of the airframe, why and how it was built, weapon systems carried, and upgrades.
Three Profiles of Flight combined: Panavia Tornado: Strike, Anti-Ship, Air Superiority, Air Defense, Reconnaissance & Electronic Warfare Fighter Bomber; Sepecat Jaguar: Tactical Support and Maritime Strike Fighter; and British Aerospace Hawk: Armed Light Attack and Multi-Combat Fighter Trainer
The 45-pound fibreglass and wood airframe has a 13-foot wingspan.
Sky's the limit for UAV maker: prop technology may open doors for T Bay company
The company's new software, ICE-flow Library and GlyphWorks, will track and manage the airframe test data, Burt said.
Organizing tons of test data
The squadron tests the weapons as well as their compability with a particular airframe. Supercavitating projectiles, with the ability to hit underwater mines, have been tested, as well as the Advanced Precision Kill Weapon System and a laser-guided 2.75-inch folding fin aerial rocket.
Air Test and Evaluation Squadron 21
Citing industry standards, it claimed that the engine, APU and airframe were functionally interdependent; thus, the "unit of property" was the entire aircraft.
FedEx flies high: Sixth Circuit affirms deductibility of repairs
By changing from different helicopters to one common airframe modified to fit mission requirements, many training obstacles vanish.
Air Force print news (Dec. 17, 2003): replacements sought for aging helicopters
Astech will be merged into GKN Aerospace Chemtronics, which already supplies airframes to the F22 fighter programme in the US.
US link moves GKN closer to cutting edge
ENGINEERING group GKN bolstered its aerospace business yesterday by landing the US airframe and engine products group Astech.
GKN boosted by pounds 22m deal
Bullen and McKenzie tested the airframes of eight microbat species in the Coolgardie Region of WA for flight performance, stability and control, and came up with a novel classification of bat flight manoeuvres.
Bats as aircraft. (journal extracts)