(redirected from airscrews)
Also found in: Dictionary, Thesaurus.
The following article is from The Great Soviet Encyclopedia (1979). It might be outdated or ideologically biased.

(propeller), a propulsion device in which radially mounted blades displace air by revolving, thus creating a propulsive force (thrust). An airscrew consists of a hub, which is mounted on the engine shaft, and blades whose profile varies along their span and whose angle of inclination to the plane of rotation is variable—that is, they are twisted. In flight, as a result of the combined effect of forward speed, the linear speed of rotation, and the increase in the speed of the airflow caused by the action of the airscrew, the air strikes each individual section of the blade (Figure 1) at a certain angle of attack. The total aerodynamic force resulting from all the sections of all the blades constitutes the propulsive force of the airscrew and the resistance to its rotation. Depending on the power input, airscrews with various numbers of blades (two, three, or four) or coaxial airscrews (which rotate in opposite directions to reduce the power loss from twisting of the propeller wash) are used. The first airscrews had fixed pitch, defined by the constant angle of blade setting at a given radius, usually 75 percent of the maximum. Variable-pitch airscrews were introduced to maintain satisfactory efficiency over the entire range of flying speeds and engine sizes, as well as to reduce propeller drag to a minimum (feathering) in the event of a forced engine shut-down in flight or to provide reverse thrust to decelerate the aircraft on landing (reverse pitch). In airscrews of this type, the blades are rotated in the hub about their longitudinal axis by a mechanical, hydraulic, or electrical mechanism controlled by a centrifugal governor, which maintains a constant, preset number of revolutions. To increase thrust and efficiency at low forward speed and high power, airscrews are mounted in an annular airfoil, in which the airstream velocity in the plane of rotation is higher than for an unducted airscrew, and the ring itself provides additional thrust as a result of the circulation velocity. The camber of an airscrew blade section can be increased for the same purpose.

The diameter of an airscrew may be as much as 6-7 m. The blades of airscrews are made from wood, Duralumin, steel, and composition materials. At air speeds between 600 and 800 km/hr, the efficiency of an airscrew varies from 0.9 to 0.8 respectively. Efficiency declines at higher speeds as a result of the compressibility of air. The main way of reducing the power loss owing to the compressibility of the air is to use thin-profile blades with low camber. 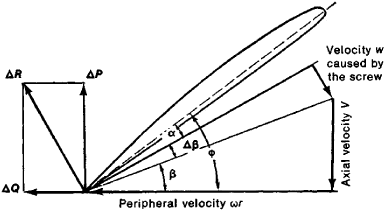 Figure 1. Profile of an airscrew blade (with velocity and force vectors): (α) angle of attack, (φ) blade angle,(V) forward speed of screw, (ωr) peripheral velocity of a blade section, (w) additional airstream velocity at blade section caused by the screw, (ΔR) aerodynamic force, (ΔP) thrust, (ΔQ) resistance to the rotation of a blade section. The dotted line indicates the chord of the profile.

The idea of the airscrew was suggested in 1475 by Leonardo da Vinci, but it was first used to generate thrust by M. V. Lomonosov in 1754 in a model of a meteorological research instrument. By the mid-19th century, marine propellers, operating in the same way as airscrews, were in use on ships. In the 20th century airscrews have come to be used on dirigibles, airplanes, helicopters, aerosleighs, air-cushion vehicles, and so on. The methods of aerodynamics calculation and design of airscrews are based on extensive theoretical and practical research. In the period from 1892 to 1910 the Russian research engineer and inventor S. K. Dzhevetskii developed the theory of the isolated blade section, which was further developed in 1910-11 by the Russian scientists B. N. Iur’ev and G. Kh. Sabinin. From 1912 to 1915, N. E. Zhukovskii established the vortex theory, which gives a clear physical representation of the operation of the airscrew and other bladed devices and establishes the mathematical correlation between the forces, velocities, and geometrical parameters of devices of this type. A significant role in the further development of this theory and its engineering applications and in research into the strength of airscrews was played by V. P. Vetchinkin and his coworkers. The theory of the optimum screw with a finite number of blades was established by the German scientist A. Betz (1919) and the British scientist S. Goldstein (1929) and has been further developed in the work of Soviet scientists. In 1956 the Soviet scientist G. I. Maikopar extended the vortex theory of airscrews to the helicopter rotor.

A propeller. The term is no longer in use.
An Illustrated Dictionary of Aviation Copyright © 2005 by The McGraw-Hill Companies, Inc. All rights reserved