allegory, in literature, symbolic story that serves as a disguised representation for meanings other than those indicated on the surface. The characters in an allegory often have no individual personality, but are embodiments of moral qualities and other abstractions. The allegory is closely related to the parable, fable, and metaphor, differing from them largely in intricacy and length. A great variety of literary forms have been used for allegories. The medieval morality play Everyman, personifying such abstractions as Fellowship and Good Deeds, recounts the death journey of Everyman. John Bunyan's Pilgrim's Progress, a prose narrative, is an allegory of man's spiritual salvation. Spenser's poem The Faerie Queene, besides being a chivalric romance, is a commentary on morals and manners in 16th-century England as well as a national epic. Although allegory is still used by some authors, its popularity as a literary form has declined in favor of a more personal form of symbolic expression (see symbolists).

A figurative representation or sculpture in which the meaning is conveyed by the use of symbols.

a conventional representation, in art, of abstract ideas which are not assimilated in the artistic image but retain their independence and remain external to the image. The connection between image and meaning is ascertained in allegory by analogy (for example, the lion as the embodiment of strength). Unlike a symbol, which has multiple meanings, allegory is characterized by a unique, constant definition and is revealed not directly in the artistic image but only through interpretation of the obvious or hidden allusions and evidence contained in the image—that is, by subsuming the image under some concept (religious dogma, moral, philosophical, or scientific ideas, etc.). Insofar as the universal and the particular are inseparably intertwined in an artistic image, allegory cannot fully account for the content of the image, even while being a fundamental and necessary component of it.

The term “allegory” was first used in Longinus’ and Cicero’s treatises on rhetoric. In the aesthetics of the Middle Ages allegory was one of the four meanings contained in a work of art, in addition to the grammatical (literal), moral, and anagogical (edifying) meanings. As a specific form of artistic image, allegory was studied in detail by German aes-theticians of the 18th through the beginning of the 19th centuries (Winckelmann, Goethe, Schelling, Hegel, Solger, Schopenhauer, and others).

In literature many allegorical images are borrowed from mythology and folklore. Fables, morality plays, and parables, as well as many works of Eastern poetry of the Middle Ages, are built on allegory; it also appears in other genres (“The Three Springs” by A. S. Pushkin, the stories of M. E. Saltykov-Shchedrin). In the mid-19th century the concept of allegory was narrowed to mean only an artistic technique.

In the fine arts, allegory (figures with constant attributes, groups of figures, and compositions embodying some concept) constitutes a separate genre whose features are discernible in the mythological pictures of antiquity. Allegories of virtue, vice, and the like, which were widespread during the Middle Ages, took on humanistic attributes during the Renaissance. Allegories in mannerist, baroque, and rococo art became particularly complex and refined. Classicism and academism viewed allegory as part of the “high” historical genre. In contemporary art allegory has given way to symbolic images with a more highly developed psychological imagery. 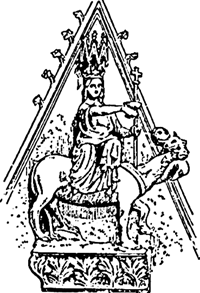 allegory: Cathedral of Worms, 13th cent. The beast with four heads symbolizes the Four Gospels
A figurative representation in which the meaning is conveyed symbolically.
McGraw-Hill Dictionary of Architecture and Construction. Copyright © 2003 by McGraw-Hill Companies, Inc.

1. a poem, play, picture, etc., in which the apparent meaning of the characters and events is used to symbolize a deeper moral or spiritual meaning
2. the technique or genre that this represents
3. use of such symbolism to illustrate truth or a moral
Collins Discovery Encyclopedia, 1st edition © HarperCollins Publishers 2005