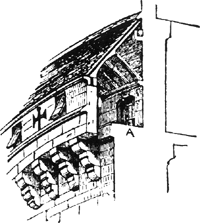 alure A
A gallery or passage, as along the parapets of a castle, around the roof of a church, or along a cloister.
McGraw-Hill Dictionary of Architecture and Construction. Copyright © 2003 by McGraw-Hill Companies, Inc.