originally, a calendar with notations of astronomical and other data. Almanacs have been known in simple form almost since the invention of writing, for they served to record religious feasts, seasonal changes, and the like. The Roman fasti, originally a list of dies fasti (days when legal business might be transacted) and dies nefasti (days when legal business should not be transacted), were later elaborated into various lists, some of them resembling modern almanacs.

The almanac did not become a really prominent type of reading matter until the introduction of printing in Western Europe in the 15th cent. RegiomontanusRegiomontanus
[Lat.,=belonging to the royal mountain, i.e., to Königsberg], 1436–76, German astronomer and mathematician, b. Königsberg. His original name was Johannes Müller.
..... Click the link for more information.  produced one of the famous early almanacs (his Ephemerides), incorporating his astronomical knowledge. Most early almanacs were devoted primarily to astrology and predictions of the future. Prediction of the weather has persisted in many modern almanacs, but the crude and sensational magic began to disappear early, to be replaced by more or less scientific information. Late in the 18th cent. truly scientific almanacs appeared—notably the British Nautical Almanac (founded 1767; see ephemerisephemeris
(pl., ephemerides), table listing the position of one or more celestial bodies for each day of the year. The French publication Connaissance de Temps is the oldest of the national astronomical ephemerides, founded in 1679.
..... Click the link for more information. ), which was the inspiration for the American Ephemeris and Nautical Almanac (founded 1855).

The popular almanac, however, developed in the 17th and 18th cent. into a full-blown form of folk literature, with notations of anniversaries and interesting facts, home medical advice, statistics of all sorts, jokes, and even fiction and poetry. The first production (except for a broadside) of printing in British North America was an almanac for the year 1639. One of the best colonial almanacs was the Astronomical Diary and Almanack begun by Nathaniel AmesAmes, Nathaniel,
1708–64, American almanac maker, b. Bridgewater, Mass. His Astronomical Diary and Almanack, begun in 1725 and issued annually after c.1732 from Dedham, Mass.
..... Click the link for more information.  in 1725, and this was the forerunner of the most famous of them all, Benjamin FranklinFranklin, Benjamin,
1706–90, American statesman, printer, scientist, and writer, b. Boston. The only American of the colonial period to earn a European reputation as a natural philosopher, he is best remembered in the United States as a patriot and diplomat.
..... Click the link for more information. 's Poor Richard's Almanack (pub. by him 1732–57), which in its title recalled one of the most popular and long-lasting of English almanacs, that of "Poor Robin" (founded c.1662). The most enduring of all American almanacs was first published in 1792 by Robert Bailey ThomasThomas, Robert Bailey,
1766–1846, American journalist, b. Grafton, Mass. He was the founder and long-time editor (1792–1846) of The Farmer's Almanac[k] (later The Old Farmer's Almanac[k]).
..... Click the link for more information. ; it came later to be called The Old Farmer's Almanac[k].

The best types of present-day almanacs are handy and dependable compendiums of large amounts of statistical information. Noteworthy American almanacs include The World Almanac and Book of Facts (first pub. as a booklet in 1868, discontinued 1876, revived 1886), and the Information Please Almanac (first pub. 1947, now the Time Almanac). There are also useful almanacs devoted to particular topics, such as sports, health care, Native Americans, and specific countries, or designed for specific audiences, such as children. 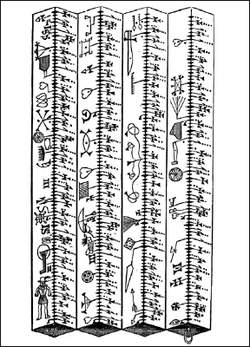 The four sides of the clog almanac are shown extended to reveal the marks for each day. Reproduced by permission of Fortean Picture Library.

An almanac is a book or booklet containing sets of tables, particularly calendrical tables, announcing astronomical or astrological events (such as Moon phases, eclipses, and beginnings of seasons) and carrying historical facts, information on planting by the signs, and other types of data. Older almanacs (the almanac tradition has been traced as far back as the Hellenistic period) contained prophetic announcements, a tradition carried on by modern almanacs, which usually predict the day-by-day weather on the basis of meteorological astrology. In U.S. history, the most well-known example was Poor Richard’s Almanac (1732–1757), which was issued by Benjamin Franklin. The Old Farmer’s Almanac remains popular in rural areas.

(1) A nonperiodic collection containing information from various fields of public activity such as literary news, scientific achievements, legislative changes, and so forth. Such almanacs are similar in type to so-called calendar-reference books.

(2) Literary almanac—a collection of literary works that are often united by some feature—theme, genre, school of thought, and so forth. They first appeared in Western Europe (France) in the middle of the 18th century and in Russia at the end of the 18th century.

[′ȯl·mə‚nak]
(science and technology)
A book that contains astronomical or meteorological data, arranged according to days, weeks, and months of a given year, and may also contain diverse information of a nonastronomical character.
McGraw-Hill Dictionary of Scientific & Technical Terms, 6E, Copyright © 2003 by The McGraw-Hill Companies, Inc.

Feedback
Flashcards & Bookmarks ?
Please log in or register to use Flashcards and Bookmarks. You can also log in with
Flashcards ?
My bookmarks ?
+ Add current page to bookmarks
Mentioned in ?
References in periodicals archive ?
There's enough uncertainty in these seasonal outlooks that the Farmers' Almanac ideas could prevail.
More 'flake news' from Farmers' Almanac
The Farmers' Almanac, which bases its long-range forecast on a mathematical and astronomical formula developed in 1818, forewarns of "significant snowfall for parts of its seven zones." Some of this snow may start early with snow predicted in New England and Mid-Atlantic regions during December 2018.
Farmers' Almanac predicts a very cold and snowy winter for Central PA
* The World at a Glance: An annual feature, The World Almanac provides a quick look at the surprising stats and facts that define a changing world.
New Book: The World Almanac[R] and Book of Facts 2018
Only the editor of the almanac knows the exact formula used to determine the forecasts.
What To Expect From This Winter In The United States
The LMS Almanac Corporate Edition was created to simplify this process, with all the comparative data and insider advice corporations need to find the right solution faster, and with a higher level of confidence.
Popular "LMS Almanac" Selection Guide Now Includes Personalized Quick-Start Consulting
"Worcester Almanac: 2015'' is available online at wrrb.org.
Bureau launches Worcester Almanac
The almanac further read that there are 7 Blue Moons in a Lunar Cycle of nineteen years, explaining that in the olden times the almanac makers had difficulty while calculating the occurrence of the Blue Moon and this was the uncertainty that gave rise to the expression 'Once in a Blue Moon.'
Realities behind Blue Moon revealed
The Ladies' Diary or Woman's Almanac first saw the light of day in 1704, and ran for almost 150 years.
The birthplace of the 'diversion of fair sex' HISTORY The headmaster of a boys' school played a leading role in gender equality more than 300 years ago. Chris Upton reports
The almanac pages offer the latest data on the world's 196 nations.
World Affairs Annual 2013
Almanac Realty Investors, a provider of growth capital to public and private real estate companies, announced the final closing of its latest fund, Almanac Realty Securities VI, L.P.
Almanac beats fund goal
Ireland's oldest astronomical calendar, Old Moore's Almanac, has claimed the Parisian landmark will be targeted in 2013.
Moore There's to come in 2013; ALMANAC'S PREDICTIONS
Stargazers' Almanac 2013: a monthly guide to the stars and planets
Stargazers' Almanac 2013: a monthly guide to the stars and planets