1. a curve that lies on a cylinder or cone, at a constant angle to the line segments making up the surface; spiral
2. the incurving fold that forms the margin of the external ear
3. another name for volute
4. any terrestrial gastropod mollusc of the genus Helix, which includes the garden snail (H. aspersa)

Any spiral form, particularly a small volute or twist under the abacus of the Corinthian capital.

[′hē‚liks]
(electricity)
A spread-out, single-layer coil of wire, either wound around a supporting cylinder or made of stiff enough wire to be self-supporting.
(mathematics)
A curve traced on a cylindrical or conical surface where all points of the surface are cut at the same angle.
(cell and molecular biology)
A spiral structure with a repeating pattern that characterizes many biological polymers, for example, double-stranded nucleic acids and proteins.

[′hē‚liks]
(invertebrate zoology)
A genus of pulmonate land mollusks including many of the edible snails; individuals have a coiled shell with a low conical spire. 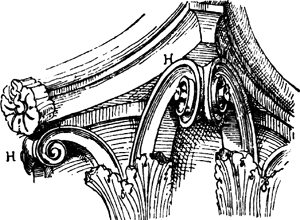 helix, 1: H
1. Any spiral, particularly a small volute or twist under the abacus of the Corinthian capital.
2. The volute of an Ionic capital.

A hardware description language from Silvar-Lisco.